Pitso Mosimane defended what seemed like conservative tactics by Al Ahly in their 2-0 defeat to Bayern Munich at the Fifa Club World Cup in Qatar on Monday night as being in keeping with the level of opposition the African champions were pitted against.

The match situation of the semifinal at Ahmed bin Ali Stadium in Al Rayyan also dictated the manner in which Ahly had to respond tactically against Hansi Flick’s phenomenally strong Bayern – statistically the best club in the world at present.

Mosimane’s team‚ 1-0 winners against host club Al-Duhail in the previous round‚ conceded the first of Robert Lewandowski’s brace in the 17th minute as Bayern bossed the opening half-hour.

Ahly had to be circumspect in their response‚ because conceding an early second would end the contest against such a quality combination as the European champions.

The Red Devils’ best passage of play came in the half-hour after the break where Ahly managed possession and passing movements that troubled Bayern‚ even though Flick’s spectacularly-drilled club were able to reorganise with breathtaking speed to deny Ahly real chances.

For Mosimane‚ it was a first defeat in 23 matches since his bombshell departure from Mamelodi Sundowns to join Ahly in October.

He conceded that the level of opposition was a mitigating factor‚ but could not hide his obvious disappointment in the post-match press conference.

“I don’t know if there’s any coach who looks happy after he loses the match. It’s my first defeat‚ ever since I’ve been Ahly for the last four‚ five months‚” Mosimane said.

“So you’ve got to understand how I feel. And I hate losing.

“We prepared hard for this game. And to lose … is a bitter pill on those [preparations]‚ even though we have to accept that we played Bayern.”

After being stretched by Ahly from the restart for the second half‚ Bayern regained control around the 75th-minute mark‚ and Lewandowski’s second followed in the 81st.

In response to a question about that Ahly appearing “scared” in their tactical outlook‚ Mosimane said: “You’re saying we are scared – I don’t know about that word. But I will respect your opinion.

“But we are not scared. We just played against a big team that pushed us back.

"It’s not to say we want to stay back – they pushed us back. And you have to accept that‚ when you play against a superior team.

“You can never be opening your midfield and a free flow to go and score the goals. This is the team that put eight goals against Barcelona.

“So we are not scared. We are playing the proper football and we thought maybe we would get one chance before the 80th minute‚ and maybe we can get something in the second half and then we can risk it. 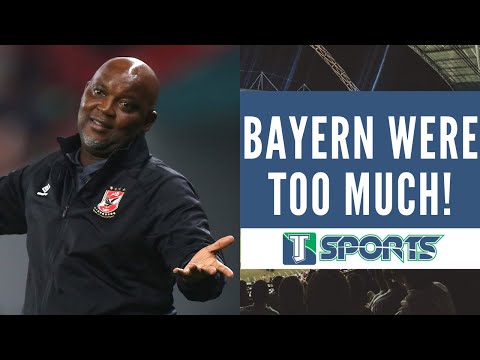 Bayern won all 11 matches – the longest winning run in the competition – being crowned 2019-20 Uefa Champions League winners‚ including the six group games and a 7-1 aggregate last-16 victory against Chelsea.

They beat Barcelona 8-2 in the single-leg quarterfinal‚ Lyon 3-0 in the semifinal and Paris St-Germain 1-0 in the final‚ scoring 42 goals with just seven conceded.

They won the 2019-20 Bundesliga by 13 points‚ and at the Club World Cup are seeking to become just the second team since Barcelona in 2009 to record a sextuplet of six trophies in a season.