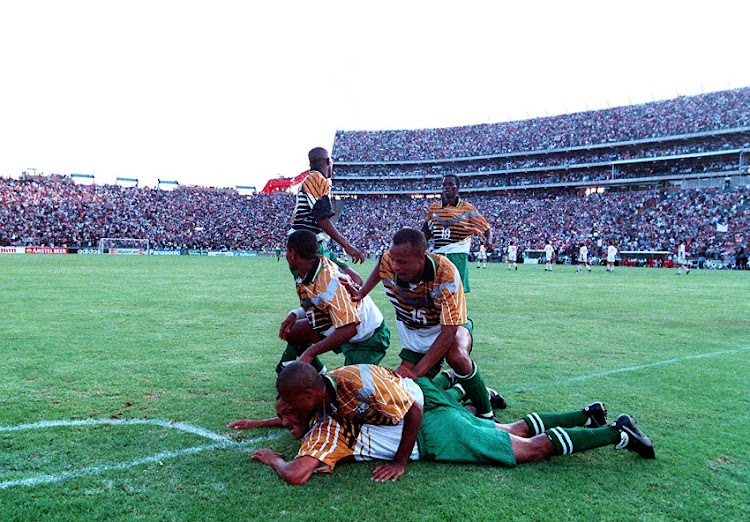 A file photo of Bafana Bafana players celebrating after Mark Williams scored his second goal in a historic 2-0 victory over Tunisia in the 1996 African Cup of Nations final in Johannesburg.
Image: duif du toit/Gallo Images

Bafana Bafana abandoning their bus due to traffic‚ Thabo Mbeki’s visit to the change room and Sizwe Motaung’s nerves so overwhelming him he had to “pee three times” are Doctor Khumalo’s standout memories of the opening game of the 1996 Africa Cup of Nations.

Khumalo‚ speaking as the 25-year anniversary of the 1996 final where Bafana beat Tunisia 2-0 at FNB Stadium 25 years ago passed last week‚ recalled how initially Bafana were confused leaving for the tournament-opening Group A win against Cameroon at driving through a ghost town in Johannesburg.

They only later realised everyone was at home watching the build-up on TV.

The Kaizer Chiefs legend said while President Nelson Mandela’s words and visits — leading to the term “Madiba Magic” — inspired Bafana‚ then-Vice President Mbeki’s visit to the changeroom ahead of the opening game also lifted the team that day.

Bafana ran out 3-0 winners against Cameroon on January 13 1996 thanks to goals by Phil Masinga‚ Mark Williams and John “Shoes” Moshoeu. Khumalo said Bafana could barely get near the packed FNB Stadium.

“We were held up in traffic there for almost 45 minutes near the Sasol garage just before FNB Stadium [on Nasrec Road]‚” he recalled.

“And you can imagine‚ this is Bafana Bafana‚ we were in the bus‚ we were singing — we were shocked.

“And I think it was [team manager] Glyn Binkin who received a call because we were almost going to be fined by Caf for not making the time to check accreditations an hour before kickoff.

“So we had to walk from [where] Safa House [is now] into the stadium. They had to call police‚ soldiers‚ security to escort us. But we were late and Safa was fined that day.

“We had the [police escort] blue lights — the problem was traffic. The cars were chokker block. Fans went crazy when they saw the Bafana bus.

“When we were still at the hotel we could see the feed on TV‚ and by 11am the stadium was packed. And some of the guys‚ that’s where the pre-match meal couldn’t be accommodated in their stomachs‚” Khumalo laughed.

The Chiefs legend said the crowd‚ and that unbelievable atmosphere of the arrival and entrance to a packed FNB lifted Bafana to a point of walking on air‚ as did future president Mbeki coming to the change room.

And yet‚ leaving the hotel‚ Johannesburg was like a ghost town — an unnerving experience initially for the team.

“There’s a moment I will never forget in my life until God calls me. We were based in Parktown [at Sunnyside Park Hotel]‚ and as we were leaving there was no single person in the streets. Like we were in lockdown‚ it was like that — quiet‚ quiet‚” Khumalo said.

“It was only us going to the stadium.

“Everyone was preparing braais‚ at home watching on TV. At the stadium‚ I don’t think even the Cameroon supporters managed to get 2‚000 people into FNB.

“You know when you talk about the spirit of 1996 we talk Mandela‚ Clive Barker and the supporters and people of South Africa.

“We were moving mountains. The president‚ the government‚ supporters‚ Clive and the technical team‚ and the players — that combination would have destroyed any team.

“And at that time they were regarded as No.1 [in Africa].

“But you know what‚ that old man Clive‚ I will always cherish Clive‚ Bra Phil [Setshedi]‚ Jomo [Sono]‚ Budgie Byrne — that was the technical team. And [team doctor] Dr [Victor] Ramathesele‚ Glyn Binkin.

“There were goosebumps in the dressing room. There was a moment where it went silent there. I thought something was wrong.

“Everybody concentrated on his boots‚ on his jersey‚ some guys were just facing down. We stopped singing. It just went quiet for a few minutes.

“While Thabo was speaking to us you could hear that ‘shosholoza’. And there was like a drum beat‚ people [stamping on the stands] in a rhythmical manner.

Bafana beat Angola 1-0 in their next group game‚ then lost 1-0 to Egypt.

They beat Algeria 2-1 in the quarterfinals‚ and tournament favourites Ghana 3-0 in the semis.

They lifted the trophy against Tunisia on February 3 1996.

Pitso Mosimane has not completely ruled out the possibility of coaching Bafana Bafana again in the future.
Sport
11 months ago

A glance over the awe-inspiring statistics of Bayern Munich since Hansi Flick became their manager in November 2019 reveals the extent to which Al ...
Sport
11 months ago

AmaZulu coach Benni McCarthy says former Bafana Bafana teammates Siyabonga Nomvethe and Moeneeb Josephs have made his job at the Durban side much ...
Sport
11 months ago