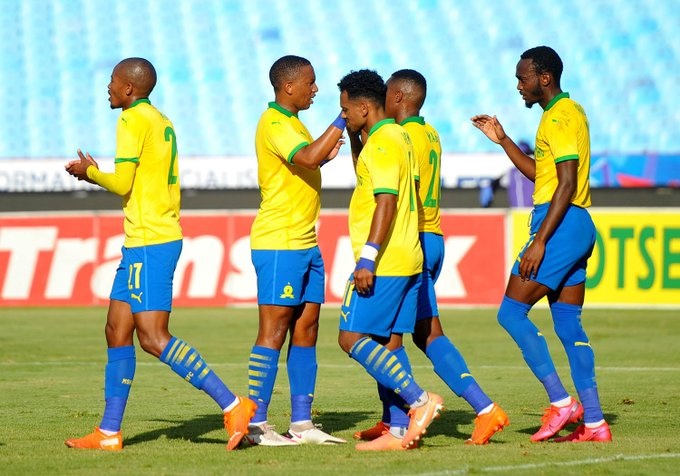 Strikes from Mosa Lebusa in the 10th minute and substitute Kermit Erasmus in the 90th earned Downs an efficient return.

Hilal, semi-finalists in the in inaugural Champions Cup in 1966, have a proud record in Caf’s premier club competition. Their four subsequent semi appearances came post-2007, the last in 2015. Last campaign they missed the quarterfinals by a point from eventual winners Al Ahly.

Downs, though, had Hilal’s number, their only deficiency a mild lack of killer instinct to kill the game sooner.

Overall it was a good night for Downs. With Group B favourites TP Mazembe of Democratic Republic of the Congo held 0-0 at home by Algeria’s CR Belouizdad, the Brazilians took the lead of Group B.

Downs showed enough class to suggest they cannot only progress through the stage, but win the group too.

Champions Mamelodi Sundowns extended their lead at the top of the standings after they beat Chippa United 2-0 at Loftus on Sunday afternoon.
Sport
1 year ago

It seemed strange to see Sundowns enter a Champions League matchup without the warrior of their campaigns of the last six years, Hlompho Kekana. The Brazilians’ captain fantastic was returning from injury, and, as a sign of the times post-Pitso Mosimane’s departure to Ahly, the 35-year-old is not guaranteed his place in central midfield any longer even when fit.

Rivaldo Coetzee and Mothobi Mvala look a combination — though Sundowns’ coaching trio like to mix and match too — who can take Downs into the next half-decade of continental warfare.

The movement and skill of the front line of Themba Zwane and Sphelele Mkhulise wide of Gaston Sirino and Peter Shalulile was too much for Serbian coach Zoran Manojlović’s organised but unspectacular Hilal to contend with.

Sundowns bossed the opening half-hour almost too easily. After taking the lead inside 10 minutes, they could not bury a second. From just the second minute right-back Lebogang Maboe’s ball across the face threatened.

Downs took the lead with Scandinavian simplicity, Lyle Lakay’s corner from the right falling to Lebusa unmarked to nod past goalkeeper Mohamed Abooja.

Zwane’s switch-pass threaded Mhulise into the box, Abooja closing the space. Mvala’s chip found Zwane, who beat Abooja, but by attempting a short pass inside when there was a chance to finish.

With a minute to the break Shalulile’s outstretched leg felt the wind of Sirino’s ball across the face, with Abooja beaten.

On the hour Sundowns were almost caught. From defence Hilal played Abdel Raman to the left touchline, who was able to lob to the far side where the run of strike partner Nazal Hamid had not been tracked, Onyango having to come off his line to smother.

The second of Lakay’s swerving free-kicks to test Abooja, as the rain came again, dipped for an awkward stop from Abooja.

Downs deserved a second, and got it when Erasmus was played through into the left of the area and slotted past Abooja.

Benni McCarthy is doing all he can to remain calm, optimistic and realistic about what he can achieve at AmaZulu FC - a club that has been punching ...
Sport
1 year ago

After a long-term injury Mauricio Affonso is close to a full return to training‚ Mamelodi Sundowns’ co-coach Rulani Mokwena said when asked to ...
Sport
1 year ago

‘One day they are going to lose’: Al-Hilal coach on Sundowns’ home record

Al-Hilal Omdurman coach Zoran Manojlović says they will not be intimidated by the highly impressive 19-match unbeaten home record of Mamelodi ...
Sport
1 year ago