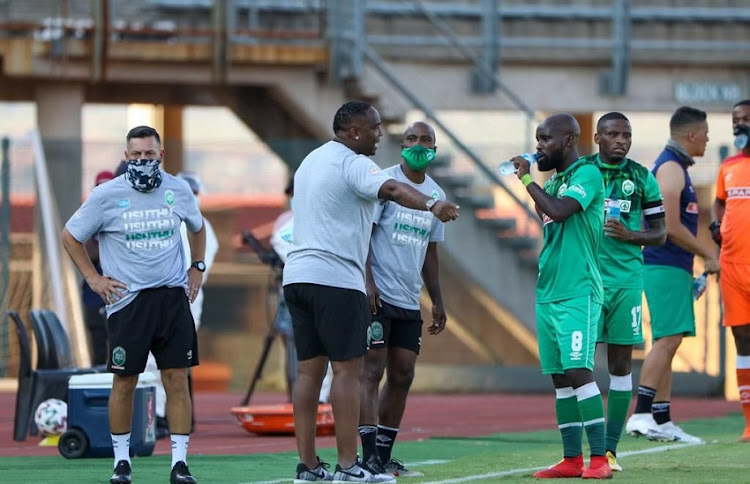 Benni McCarthy says former Bafana Bafana teammates Siyabonga Nomvethe and Moeneeb Josephs have made his job at the Durban side so much easier.
Image: TWITTER/AMAZULU

Benni McCarthy believes the two debutants he fielded in a draw against Swallows FC at the weekend give AmaZulu options when they meet Kaizer Chiefs in the DStv Premiership at FNB Stadium on Wednesday (kickoff 3pm).

Midfielder Zukile Kewuti and 20-year-old centreback Samkelo Mgwazela made their debuts in Usuthu's 0-0 Premiership draw against the Birds at Dobsonville Stadium on Sunday.

The result brought to an end a run of four wins for AmaZulu‚ as coach McCarthy started new signing Kewuti (25) - who joined Usuthu on loan from the coach's previous team‚ Cape Town City‚ last week - in central midfield.

Mgwazela‚ signed from Lamontville Golden Arrows' reserves in the off-season‚ was given his PSL debut coming on at the break for right-back Thembela Sikhakhane and slotting into central defence‚ with Mbongeni Gumede going wide. McCarthy was glowing in his praise for the new pair.

Memories of Kaizer Chiefs' embarrassing defeat to lower tier side Richards Bay in the Nedbank Cup a little over a week ago are still very fresh in ...
Sport
1 year ago

"I'm very happy with the performance from Zukile. It's not easy coming into a team that's in good form and on a good run‚" AmaZulu's coach said.

"And you must remember he hasn't played the last few games for Cape Town City‚ so he was always going to run out of legs towards the end.

"But I think defensively that's why we were solid in midfield. We controlled the midfield and Swallows couldn't really penetrate the way they usually do‚ because [Makhehlene] Makhaula and 'Zuki'‚ the pair in front of the back four‚ were really steady and doing a great job.

"I'm very happy with the debut for Zuki. He's a player who I know, the qualities that he has and what he can bring to our team‚ and he's only going to get better with more game time.

"And then Samkelo Mgwazela‚ ah‚ just a breath of fresh air. You know‚ a young man‚ he's valiant‚ so brave. He gets thrown in and he deals with the situation well."

McCarthy said his team lacked penetration in the final third against Brandon Truter's third-placed Birds‚ whose remarkable unbeaten run on their return to the top-flight was extended to 15 matches at the halfway stage of the season‚ even if they have drawn their last four matches.

"Defensively our structures were really good but I think offensively we didn't create and attack the way we would have liked‚" the Bafana Bafana legend said.

"Too many players just weren't at the party‚ which caused us to give two points away and then only settle for one.

"But you know what‚ sometimes you don't play the best of football‚ and then you hope you get luck on your side. And today it was. We came away with a point against Swallows who are high-flyers in the league‚ so I can't be too harsh.

"And now we've got to go and focus and regroup‚ and then come Wednesday‚ ready for Chiefs."

Since his arrival in December McCarthy has steered previously battling AmaZulu to seventh place in the PSL. Chiefs‚ dishearteningly booted out of the Nedbank Cup by GladAfrica Championship Uthongathi FC last week‚ are wallowing in ninth.