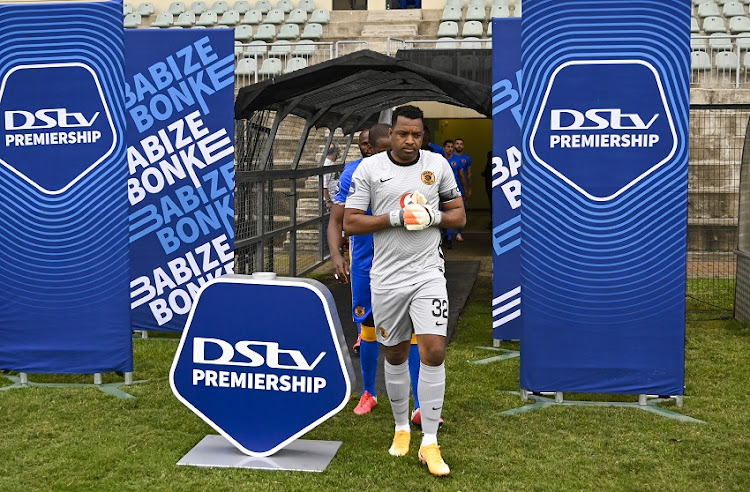 Itumeleng Khune, captain of Kaizer Chiefs FC on the day, leads the team onto the field of play during the DStv Premiership match between Golden Arrows and Chiefs at Sugar Ray Xulu Stadium on November 21 2020 in Durban.
Image: Gerhard Duraan/BackPagePix/Gallo Images

Itumeleng Khune’s declining standards, from South Africa’s best goalkeeper and even one of the best in Africa to his current mistake-prone incarnation, is “a concern” for Kaizer Chiefs‚ coach Gavin Hunt has admitted.

Another error from the former Bafana Bafana No 1 was costly for Amakhosi on Wednesday as he came for a corner in the 85th minute for 10-man Amakhosi with the score at 1-1 in their DStv Premiership matchup against AmaZulu at FNB Stadium.

Khune, 33, was Chiefs’ undisputed holder of the gloves for almost a decade from his debut season in 2007-08. He largely carried a battling Chiefs in many games at the start of their current six-season trophyless run.

But the keeper began to suffer serious and lengthy injuries from the 2018-19 season‚ and has played a total of 23 league games in Chiefs’ last three campaigns‚ including 2020-21.

Kaizer Chiefs are just out of ideas, 10-man Amakhosi slumping to a 2-1 DStv Premiership defeat at FNB Stadium on Wednesday to a more alert, inventive ...
Sport
10 months ago

This season Khune has conceded 12 goals in his six starts in the league‚ a fair share of those from errors. Given a start by Hunt ahead of Daniel Akpeyi against AmaZulu‚ Khune dealt well with being the busier of the two keepers until his costly mistake at the end.

“Ja‚ it’s not the place‚ not the forum to talk about that. But it’s a big concern‚ yes‚ since I’ve been here‚” Hunt responded in the post-match press conference when asked about Khune’s worrying statistics.

“So ja‚ it’s something we just have to keep working on and hopefully we can improve. But certainly I think it’s a bit more than that [12 goals] that you mention. So ja‚ it’s a big concern.”

Khune’s poor form has meant that Chiefs’ No 1 this season and the past‚ Nigeria international Akpeyi‚ is not being pushed hard enough for his place between the posts - and can make mistakes too.

While the form of potentially such a key player as Khune is a concern for Chiefs‚ he should not be the scapegoat for the defeat against AmaZulu. Usuthu were the more alert‚ energetic and inventive team‚ hitting the woodwork twice‚ and ultimately deserved the three points.

Ninth-placed Chiefs have another tough league outing on Saturday against second-placed SuperSport United at FNB.

Despite Chiefs losing, there was some bright news for Amakhosi fans when Itumeleng Khune returned to the starting line-up for the DStv Premiership ...
Sport
10 months ago

AmaZulu's attacking midfielder Siphelele Magubane has every reason to believe Usuthu are capable of causing another upset and defeat Kaizer Chiefs in ...
Sport
10 months ago

Kaizer Chiefs and Bafana Bafana goalkeeper Itumeleng Khune is far from “finished” and must stay at Naturena to fight for his place in Amakhosi’s ...
Sport
11 months ago