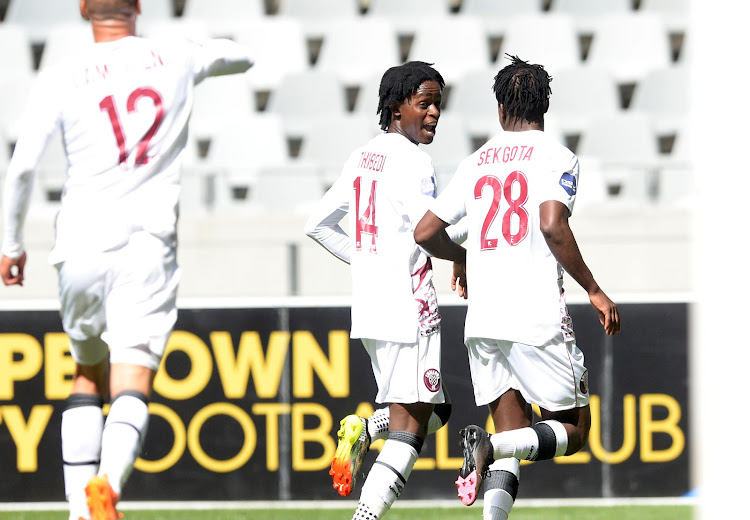 A run of five successive Premiership draws for the once high-flying Swallows FC has taken the wind out of their sails as the promoted Soweto club played to yet another stalemate‚ this time away at Cape Town City on Sunday afternoon.

Kgaogelo Sekgotla scored his first DStv Premiership goal early in the first half to give Swallows the lead at the Cape Town Stadium‚ but City equalised after the half hour mark through Mduduzi Mdantsane.

Thabo Nodada won a penalty for the home side and attacking midfielder Mdantsane stepped up to convert to force a share of the points.

Promoted Swallows took to life in the top division like a duck to water under coach Brandon Truter as they went neck-on-neck with champions Mamelodi Sundowns at the top of the standings from day one until the end of the first round during the Christmas break.

But a run of two wins in eight Premiership matches since the start of the new year has seen Swallows fly low and fall behind.

Swallows started the new year with a home 3-2 success over the same Cape Town City on January 5.

They were impressive in their 1-1 draw against Orlando Pirates on January 10 before returning to winning ways when they beat Baroka FC 1-0 in Polokwane on January 16.

However, they have not won a league match since then and a run of five draws in a row followed to peck them back.

Swallows remain third on the log standings on 30 points‚ two behind second-placed SuperSport United, and trail champions and leaders Sundowns by six points while City have just 24 points from 17 games and lie mid-table in seventh.

Having played eight matches in all competitions in eight weeks‚ it appears the congested fixture schedule is starting to take its toll on the promoted side.

Coach Truter will be comforted by the fact that three of their five successive draws were achieved against fellow title hopefuls Sundowns‚ SuperSport and Pirates.

The other two draws came against AmaZulu and City.

The two teams are certainly no slouches as Benni McCarthy has Usuthu buzzing while the Citizens are looking to be in the title mix in one way or the other this season under Dutchman Jan Olde Riekerink.

Swallows will look to bounce back to winning away against another promoted side TS Galaxy in Mpumalanga on March 2.

Minister of sport Nathi Mthethwa has indicated that allowing fans back into stadiums will be at the tail end of government’s process of fully opening ...
Sport
7 months ago

Bournemouth players to stop taking a knee before matches

Bournemouth players will stop taking a knee before matches as they believe the gesture has "run its course" in the fight against racism and ...
Sport
7 months ago

Kaizer Chiefs waste chances having to settle for draw against SuperSport

Kaizer Chiefs would have felt they deserved more than a point, but Gavin Hunt's work in progress Amakhosi will need to strategise to consolidate a ...
Sport
7 months ago

Mngqithi happy with Sundowns' combinations as the Brazilians juggernaut rolls on

Mamelodi Sundowns co-coach Manqoba Mngqithi is pleased at the efficiency with which his team is combining to achieve results on a consistent basis.
Sport
7 months ago

Safa gets tough in letter to Caf: SA clubs ‘will not play at neutral venues’

The SA Football Association (Safa) has sent a strongly worded letter to the Confederation of African Football laying out its position on travel by SA ...
Sport
7 months ago

Gavin Hunt’s search for a winning formula at Kaizer Chiefs has seemingly hit a brick wall again as the team prepare for a second tough DStv ...
Sport
7 months ago