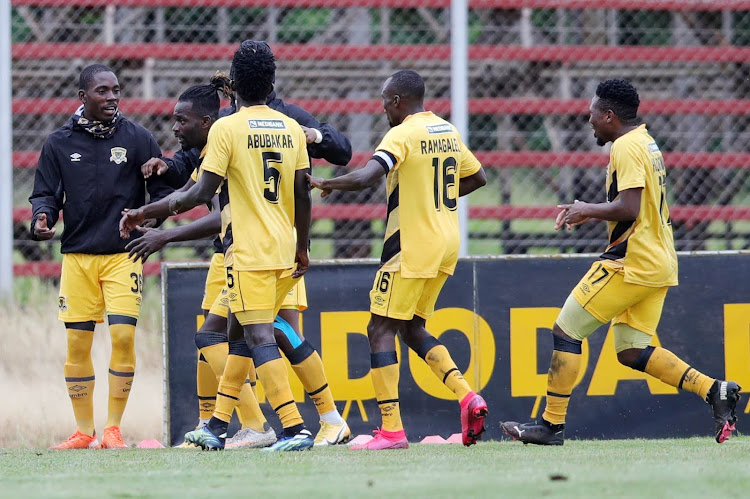 High flying Black Leopards to progress with a 1-0 win to the last eight of the of Nedbank Cup after beating AmaZulu.
Image: twitter/psl

Mohammed Anas scored his third goal in two matches‚ his 52nd-minute strike at Thohoyandou Stadium against in-form AmaZulu FC on Saturday helping Black Leopards to progress with a 1-0 win to the last eight of the of Nedbank Cup.

The Ghanaian striker‚ who has made himself noticed in SA football by thanking his wife when his efforts on the field earn him a man-of-the-match award‚ also scored a brace on Tuesday when his side beat Lamontville Golden Arrows 2-1 in Durban to end a five-match losing streak in the DStv Premiership.

Leopards’ goal came as a result of Usuthu's defence failing to deal with a Tsheamo Mashoene’s cross‚ which was tapped back by Lifa Hlongwane for Anas to easily head the ball past a helpless Neil Boshoff in AmaZulu’s goal.

Strikers Bradley Grobler and Thamsanqa Gabuza may have gone off the boil in front of goal in recent days but SuperSport United coach Kaitano Tembo is ...
Sport
7 months ago

The result was something of a shock as Leopards‚ in last place in the DStv Premiership‚ are expected to put all their efforts into surviving relegation and had met a team that started this match as big favourites having won four and drawn three league matches on top of proceeding to the last-16 after beating their neighbours Lamontville Golden Arrows.

Usuthu coach Benni McCarthy was‚ however‚ the one who showed little interest in this competition judging by the wholesale changes (eight) he made in his team’s starting line-up.

Former Bafana Bafana midfielder Siphiwe Tshabalala‚ who was yet to start a match since joining Usuthu in October‚ was among the raft of changes made by McCarthy in his starting XI.

AmaZulu’s best chance of the match came from that educated left boot of the 36-year-old Tshabalala who was unlucky to see his well-taken free kick on the right flank headed onto the crossbar by Tsepo Masilela in the 31st minute.

The home side were otherwise in full control of the proceedings in the first half with Tumelo Khutlang and Hlongwane working in tandem in creating many chances for their strikers Rodney Ramagalela and Anas.

AmaZulu never really settled and nor were they given much chance to by the home side‚ battling to impose themselves in this match‚ and instead it was Leopards who looked to extend their lead only to be denied by Boshoff on a couple of occasions.

While the loss extend Usuthu’s famine to 29 years as far as winning the trophies in the top-flight‚ on the other hand this gives McCarthy a chance to fully focus on the ambition of the club’s new boss Sandile Zungu‚ who wants to see them finishing inside the top four in the Premiership.

Leopards have a chance to repeat what they achieved in 2011 in this cup when they went as far as the final‚ where they were unlucky to lose 3-1 to Orlando Pirates at Mbombela Stadium in Mpumalanga.

Tshakhuma Tsha Madzivhandila (TTM) progressed to the quarter-finals of the Nedbank Cup with a 4-3 penalty shoot-out win over Swallows at a rainy New ...
Sport
7 months ago

Patrice Motsepe has proposed to appoint the right people‚ bring corporate governance‚ use his international business contacts to conclude deals‚ and ...
Sport
7 months ago

Kaizer Chiefs will hope their underdog stature and the fact that Wydad Casablanca may not expect much from the Caf Champions League group stage ...
Sport
7 months ago