Maritzburg‚ Middendorp and Moseamedi lie in wait for Kaizer Chiefs 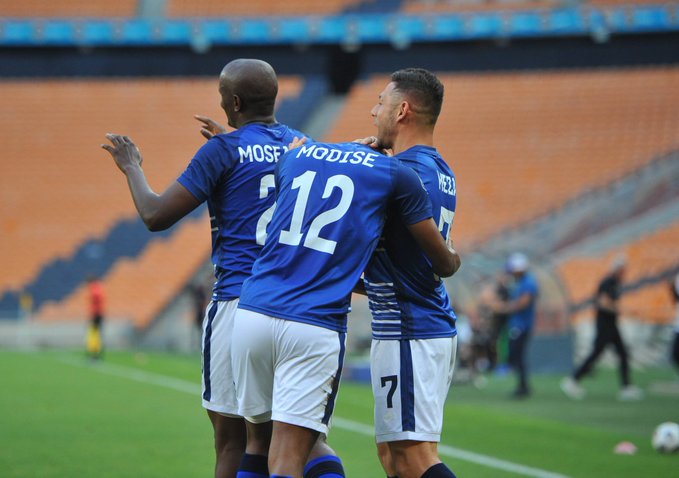 Judas Moseamedi of Maritzburg United scored twice against struggling Kaizer Chiefs during the DStv Premiership match between the teams at FNB Stadium on January 9 in Soweto.
Image: TWITTER/PSL

Maritzburg United will be looking to double their wins gained against Kaizer Chiefs in the DStv Premiership this season when they host Amakhosi at Harry Gwala Stadium on Wednesday.

The Team of Choice have already beaten Chiefs 2-0 away from home in the league in what was the Soweto giants’ former coach Ernst Middendorp’s fifth match after returning for the fourth time to the Pietermaritzburg club in late November last year.

The win against Chiefs is one the three that the German coach has managed to get in 12 league matches that also comprised five losses against Swallows FC‚ TS Galaxy‚ Orlando Pirates‚ Lamontville Golden Arrows and Tshakhuma Tsha Madzivhandila.

Happy Mashiane says he will not celebrate if he scores against Maritzburg United on Wednesday because their coach‚ Ernst Middendorp‚ gave the ...
Sport
3 months ago

In trying to arrest the slide‚ Middendorp signed a 27-year-old goalkeeping compatriot‚ Marcel Engelhardt‚ from his native Germany. Having played three league matches and conceded two goals‚ the former Eintracht Braunschweig (Bundesliga 2) gloveman is hoping his team can continue with the form they’ve shown in the past two games against Black Leopards and Bloemfontein Celtic.

Maritzburg beat Leopards 1-0 at home before ending last week with a 1-1 draw away to Celtic‚ with Bafana Bafana striker Thabiso Kutumela scoring the vital goals in both those matches.

“We were happy to achieve this win against Leopards and the draw against Bloemfontein Celtic was deserved but I feel we could have won‚” Engelhardt said ahead of the Chiefs match. “Now we’re still focused and we want to achieve more and more away from the relegation zone.

“It’s crucial to continue picking up points because we’re at the bottom of the table [15th place] and we need to get closer to the other teams. Winning will build up confidence if we keep picking up points. I hope we can continue with that on Wednesday.”

Seriously! Fans debate whether Middendorp must return to Chiefs and Hunt must go

In a stunning turn of events‚ a section of the Kaizer Chiefs fans are calling for the dismissal of coach Gavin Hunt and the reinstatement of Ernst ...
Sport
6 months ago

Though he’s never played against Chiefs‚ Engelhardt said a win against one of the top clubs in the country would boost United’s morale‚ especially at home where they’ve dropped many points this season.

“We know that Chiefs are a big team here [in SA] and they have a lot of good players‚ but I think we have a team that can have a good performance‚” Engelhardt said. “I hope we can achieve something and continue picking up points — and home games are the best way to collect points. If we continue this run I think we’ll be prepared for the next games.”