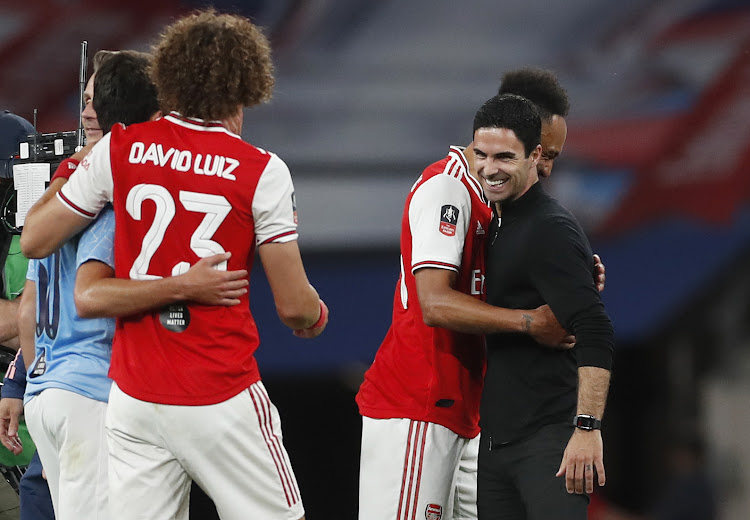 Mikel Arteta says his Arsenal team are looking closer to playing the way he wants them to play.
Image: REUTERS / Matthew Childs / Pool

Arsenal manager Mikel Arteta said his long-term project at the north London club will explode into life once football returns to normality after the impact of the Covid-19 pandemic recedes.

The Spaniard led Arsenal to the FA Cup last season but the team have failed to kick on and are 10th in the Premier League this campaign.

Arsenal's FA Cup defence was ended by Southampton in the fourth round and the Europa League is their only hope of silverware this season.

"We have created a really strong group, a bond with our players, fans, and staff and that is going to pay off in the future when everything comes back to normal," Arteta said.

"I think this project is going to go 'bang' and this is where we are. Sometimes it is difficult to see the moment now, but I'm sure of where we are going."

Arteta said securing European football next season was crucial to his plans of rebuilding the team.

"We know the aim always is to be involved in the Champions League but at the moment things are looking difficult but possible," he said.

"Obviously the financial package that is attached is really, really important.

"It is not just about an amount. It is about a project that is going to take some effort from everybody and we know that and the challenging moments we are facing at the moment is making it even harder."

Arsenal face Greek side Olympiakos in the first leg of their Europa League last-16 tie later on Thursday.

AmaZulu extended Chippa United's winless league run when they beat the Eastern Cape side 1-0 in their DStv Premiership clash at Sisa Dukashe Stadium ...
Sport
1 year ago

The decision whether Safa will bid to host the inaugural Caf Women’s Champions League 2021 will be discussed during the national executive committee ...
Sport
1 year ago

Manyama denies Maritzburg and Middendorp a double against Kaizer Chiefs

Rangers manager Steven Gerrard said it is his dream to take charge of Liverpool one day but has no intention of replacing Juergen Klopp, who has come ...
Sport
1 year ago

Orlando Pirates tough out draw ‘away’ against ES Setif in Ghana

Orlando Pirates began their Caf Confederation Cup Group A campaign in promising fashion toughing out a valuable point away from home in their “away” ...
Sport
1 year ago

During a near perfect first half, Mamelodi Sundowns ruthlessly bullied and picked apart helpless Polokwane City with four unanswered goals.
Sport
1 year ago