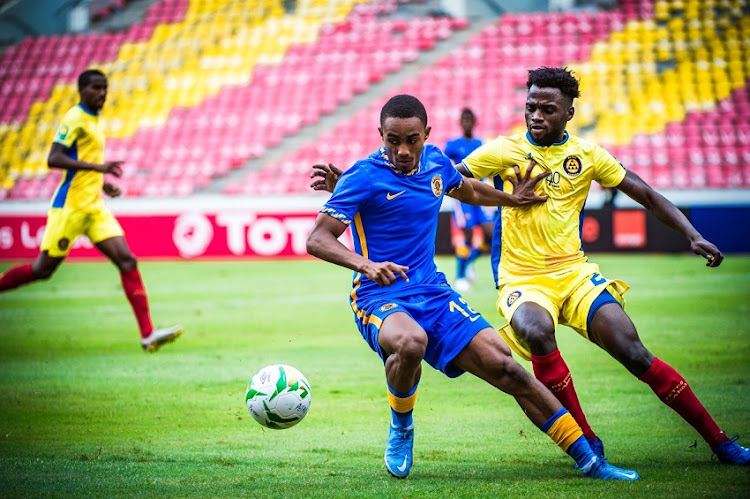 Chiefs could not profit from some decent chances at the Estadio 11 de Novembro, venue of the 2010 Africa Cup of Nations final where the Amakhosi also beat Primeiro de Agosto 1-0 as part of their aggregate win by the same scoreline in the first round in January.
Image: TWITTER/KAIZER CHIEFS

Kaizer Chiefs earned maximum points for effort, but only a point on the board in Group C, a 0-0 Caf Champions League draw away to Petro de Luanda on Tuesday evening seeing Amakhosi's chances of reaching the quarterfinals intact, but certainly slimmer.

Chiefs could not profit from some decent chances at the Estadio 11 de Novembro, venue of the 2010 Africa Cup of Nations final where the Amakhosi also beat Primeiro de Agosto 1-0 as part of their aggregate win by the same scoreline in the first round in January.

With second-placed Horoya and leaders Wydad Casablanca playing to a 0-0 draw in Guinea to go to five and 10 points, Chiefs had an opportunity to get right-back into the fray for second place if they could beat Petro.

But they had to settle for a point, to also go to five, against the one team in the group they had a real chance against away.

Kaizer Chiefs coach Gavin Hunt has said that it “was a management decision” to release Siphelele Ntshangase from his contract at Kaizer Chiefs ahead ...
Sport
2 months ago

Amakhosi are not out of the running with matches at home to Wydad and away against Horoya remaining. But if the last game against Horoya in Guinea is where Chiefs will need a result, then that’s a tough ask.

Amakhosi had their chances against Petro. They probably also edged the 90 minutes. But ultimately they could not land the decisive blow.

In a lively opening half Petro, were, indeed, a different, and far more open combination than the one that was happy to play defensively in a low block for a point at FNB Stadium 10 days ago, where Chiefs breached them twice in a 2-0 win.

The result was a fairly fast-paced, relatively end-to-end opening half.

Petro survived an early scare as Kearyn Baccus’s free-kick was curled in from the right and an attempted clearance ricocheted off the back of a home player, goalkeeper Signori Antonio having to athletically stop an own goal.

Chiefs’ best half-chance came on a counterattack that ended with Lebogang Manyama heading down to left-back Siyabonga Zulu, who had initiated the movement from deep in his own half, whose strike was blocked at close range by centreback Danilson.

For Petro, forward Job beat Baccus on the Left and crossed to find Brazilian centre-forward Tiago Azulao, who headed into the side-netting.

Petro came out from the break with a flurry of half-chances.

Richards Bay FC coach Simo Dladla will have a few changes to his usual starting line-up when the GladAfrica Championship side take on Chippa United ...
Sport
2 months ago

Left-back Pedro Francisco’s free-kick eluded everyone and Daniel Akpeyi had to get down to a save. Then Francisco’s cross was behind midfielder Dany, who attempted a flick that again forced Akpeyi into a stop.

Chiefs found a stride again in the last half-hour.

Big centreback Jose-Junior Matuwila fouled Baccus on the edge of the area and Manyama’s free-kick took a deflection inches wide.

Chiefs had their best chance to win it in the 67th, Baccus threading a pass that put Manyama into the area, who took the ball wide to the right and chipped advancing Signori, right-back Diogenes getting up to head clear in front of the line.