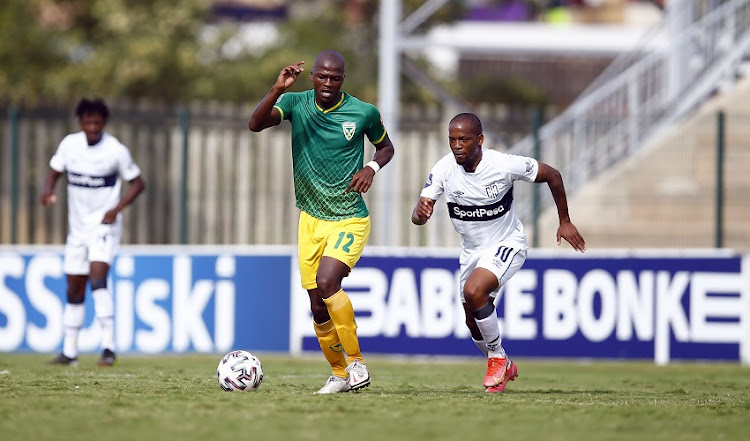 Lamontville Golden Arrows missed a chance to close to within a point of Mamelodi Sundowns at the top of the DStv Premiership table being held to a 1-1 draw by Cape Town City at Sugar Ray Xulu Stadium in Durban on Saturday.
Image: Steve Haag/BackpagePix/Gallo Images

Lamontville Golden Arrows missed a chance to close to within a point of Mamelodi Sundowns at the top of the DStv Premiership table, being held to a 1-1 draw by Cape Town City at Sugar Ray Xulu Stadium in Durban on Saturday.

Arrows had all the dominance but lacked the killer touch to take the full spoils against a side that had broken a 12-match unbeaten run by Abafana Bes’thende back in January.

The draw is something of a setback for Mandla Ncikazi’s side‚ who otherwise have performed way above expectations this season and particularly in the last eight matches since that 4-2 defeat against City just after New Year.

Arrows have won five‚ lost one and drawn two‚ including Saturday’s match‚ in those eight matches and are now very much among the teams that are challenging defending champions Sundowns for the league title.

The game could have gone either way as the visitors did trouble Arrows with their quick counterattacks. It was in one of those transitions that City caught the home side off guard when they took the lead in the fourth minute.

City’s roving right-back Craig Martin blasted a shot against Arrows keeper Sifiso Mlungwana and the rebound was tapped home by striker Abdul Ajagun‚ who scored his second goal in his second match for the Citizens. The Nigerian had opened his account in his debut when City lost 2-1 against neighbours Stellenbosch FC last week.

Arrows quickly recovered and went close to equalising before their top scorer Velemseni Ndwandwe scored his seventh goal of the season‚ finishing a loose ball inside the area after City failed to clear Seth Parusnath’s set piece in the 13th minute.

Having come into this match without a victory in six matches (three draws and three losses) since their win over Arrows‚ City were expected to struggle against Ncikazi’s side‚ who had been on top form and had come into the game having won seven points out of nine against the PSL’s three Limpopo teams.

City looked to steal the full points and were unlucky not to regain the lead in the 50th minute when Martin came within a few inches of pushing in Terence Mashego’s cross after another quick counter that left the Arrows defence in no-man’s land.

Sensing a third successive league defeat against the Cape side‚ Arrows upped their tempo with Ntsako Makhubela‚ Ndwandwe and Parusnath all instrumental in trying to get their 10th victory in 20 matches.

In the end‚ the two sides settled for a draw. Arrows remain in second spot and three points behind Sundowns‚ who have an advantage of three matches in hand.

City remain in eighth place with 26 points after 20 matches that include the last seven in which they’ve failed to register a victory after that win against the team they faced on Saturday.

Former Kaizer Chiefs and Mamelodi Sundowns midfielder George Lebese has announced that a US travel ban has forced him to terminate his contract with ...
Sport
1 year ago

Bongani Zungu has shown his support for teammate Glen Kamara who has said he was racially abused in an incident at the end of Rangers’ 2-0 defeat to ...
Sport
1 year ago