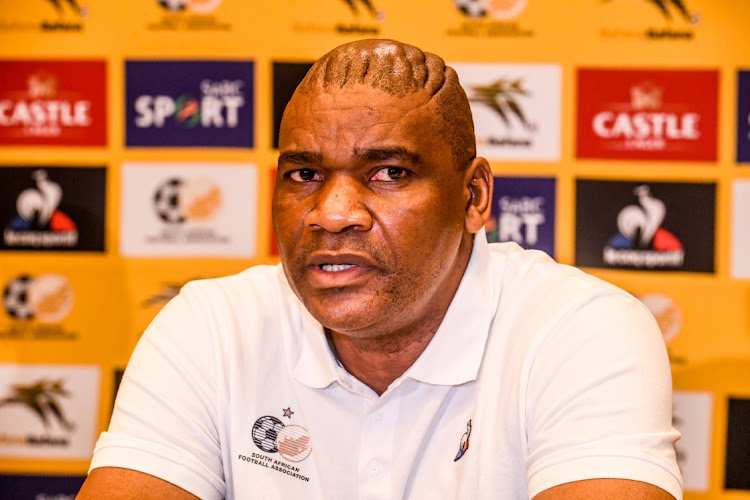 Bafana Bafana coach Molefi Ntseki has revealed that his France-based playmaker Keagan Dolly was in tears when told he could not travel to South Africa for the Afcon qualifiers.
Image: Sydney Seshibedi

Bafana Bafana coach Molefi Ntseki has questioned the apparent Afro-pessimism from European clubs that has seen squads across the continent decimated by withdrawals for the final two rounds of 2021 Africa Cup of Nations qualifiers.

This followed a Fifa circular regarding Covid-19 stating that clubs are not expected to release players in the current international date if there is a “mandatory period of quarantine or self-isolation of at least five days upon arrival” back at their clubs.

Bafana have actually emerged relatively unscathed for Thursday’s Group C clash with joint-leaders Ghana (both are on nine points)‚ and Sunday’s final match against third-placed Sudan (six points) in Khartoum.

Through intense negotiations‚ SA managed to salvage‚ crucially‚ Brighton star Percy Tau‚ plus the Portugal-based Thibang Phete‚ Luther Singh and Lyle Foster. Israel-based centreback Siyanda Xulu was only due to arrive on Wednesday‚ probably ruling him out against Ghana.

Rangers star Bongani Zungu will join the team in Sudan. Bafana’s team management were negotiating to have Montpellier winger Keagan Dolly‚ who Ntseki said was in tears over his withdrawal‚ also travel to Khartoum. Abu Dhabi-based Thulani Serero and England-based Dean Furman were ruled out.

Ntseki was asked if he felt some Afro-pessimism was involved in that European clubs were so quick to ask for their players to not travel after Fifa's directive.

“I’m very disappointed because we always look at football as a global sport‚ as a game of billions. And we always try to make friends with people‚ whether locally‚ or in Africa‚ or all over the world‚” the Bafana coach said.

“But the circular [by Fifa] that [said clubs have] got the right to refuse players to come‚ I think it’s a sad story for football.

“ ... Dean Furman has been a key player for us. Bongani Zungu was in our last camp‚ he did very well‚ the attitude was good‚ he was looking forward to helping the team qualify.

“Keagan Dolly was actually in tears‚ because he really wanted to be part of the team.”

Earlier‚ in his arrivals press conference on Monday‚ Ntseki had not pulled punches showing his disgruntlement at the situation.

“Firstly I think we should all agree that nobody from South Africa‚ and nobody from Africa brought about Covid-19‚” he said.

Ntseki elaborated on Dolly’s reaction to his withdrawal by Montpellier‚ where France’s Ligue 1 and 2 have barred players from travelling to internationals.

“It comes out to be very private‚ but I’ll just make an example of Keagan Dolly. You could hear that he was in tears when I spoke to him on Friday.

“But unfortunately … everybody’s leaving it up to the [French] government. I think it’s very unfair for a player who wanted to come and represent his country‚ and then he’s got no help from anybody at the club.”

As problematic as Ntseki finds the Fifa directive‚ and the coach has also pointed out that it has resulted in a further complication of throwing his technical team’s analysis of also-rearranged Ghana into disarray‚ it might also just have worked to some extent to Bafana’s advantage.

Ghana‚ who arrive on Wednesday‚ will bring a squad with 20 overseas-based players‚ but many of them fringe performers‚ and missing stars Jordan and Andre Ayew and Thomas Partey.

Bafana‚ with Tau and some younger European-based talent‚ plus an emphasis on a large local-based portion of the squad that is expected normally‚ will feel they’ve salvaged a combination that can have a go at the Black Stars.

Bafana coach Ntseki faces another headache: ‘Ghana will be coming here with a different team altogether’

Bafana Bafana coach Molefi Ntseki’s squad plans have not just been thrown into disarray by European clubs refusing to release players‚ but also his ...
Sport
1 year ago

Percy Tau has shown great commitment to Bafana Bafana by making the sacrifice of being willing to play in his national team’s huge Africa Cup of ...
Sport
1 year ago

Bafana Bafana find themselves in a must-win situation when they take on the Black Stars of Ghana in a crucial Africa Cup of Nations (Afcon) qualifier ...
Sport
1 year ago