Percy Tau on his challenges at English side Brighton & Hove Albion: 'I just have to go in fighting' 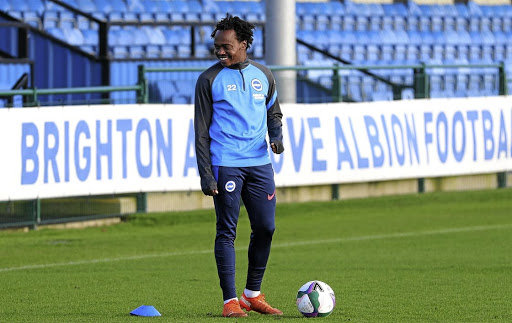 Percy Tau is struggling to regularly break into the Brighton and Hove Albion team.
Image: Twitter

Percy Tau has always fought past the hurdles in his career‚ and the Bafana Bafana international whose big heart has played a role in the nickname “Lion of Judah” says he will do the same competing for an elusive starting place at Brighton & Hove Albion.

Tau‚ though match rusty as he battles for game time making the step-up to the English Premier League (EPL)‚ will be Bafana’s key attacker in the huge 2021 Africa Cup of Nations qualifier against Ghana at FNB Stadium on Thursday (kickoff 6pm).

If anything‚ Tau’s career has been a series of obstacles that gave way to successes.

He was loaned to Witbank Spurs from Mamelodi Sundowns in his early 20s‚ and approached that situation with such positivity that on his recall he became a key part of the Brazilians’ 2016 Caf Champions League victory.

Joining Brighton‚ he was loaned to Belgian second-tier outfit Royal Union St Gilloise‚ where he won the entire league’s Player of the Season award. He started well in his next loan at Club Brugge in the Belgian top-flight‚ but lost form‚ still earning a winner’s medal.

He was in form at next loan club Anderlecht‚ where so many loans might have disheartened a player with less than the heart of a lion — then six months‚ in January‚ recalled to Brighton.

And of course‚ the EPL breakthrough‚ at 26‚ has involved struggle too‚ with Tau earning five league and cup appearances‚ his last coming in the 1-0 FA Cup defeat to Leicester City on February 10.

“Ja look‚ it has been great. It can always get worse‚ it can always change. But I think the situation has been good‚” Tau said‚ asked about his past few months ahead of a Bafana training session at FNB.

“I had the opportunity to play‚ and I was recalled‚ trying my best to put myself [forward]. It’s hard when the positions that you are competing in the guys are doing well. So you’re always looking for a chance.

“That’s the situation I find myself in and it’s football.

“In life‚ in football‚ there will always be challenges and for me to be where I am today I’ve taken on some of those challenges‚ and the outcome was good on my side.

“So I just have to go in fighting‚ and try by all means to keep patience too‚ even though it’s hard. And I work on the here and now. Some time it might change‚ and I hope for a better day.”

Apart from his FA Cup start against 2015-16’s EPL champions Leicester‚ in his opening weeks at Brighton Tau had made the starting XI away to star-studded 2018 and 2019 champions Manchester City in the league.

“The level is high. You can’t compare it to any league‚” he said.

“Every league has it’s own demands and competitiveness. That’s how it is in the EPL‚ where every game is important‚ every game is hard‚ with many top teams‚ many internationals. So for sure that increases the standard of the football.”

Bafana (on nine points in Group C)‚ depleted by injuries and European clubs refusing to release players because of Covid-19‚ can wrap up qualification for Cameroon 2021 — delayed by the pandemic to January and February 2022 — with a win against Ghana (also nine points).

If they do not win‚ they are likely to need a win or draw away to Sudan (six points) in Khartoum in the final match on Sunday.

Percy Tau has shown great commitment to Bafana Bafana by making the sacrifice of being willing to play in his national team’s huge Africa Cup of ...
Sport
1 year ago

Sundowns star Hlompho Kekana breaks his silence: ‘That would be childish and petty’

Mamelodi Sundowns captain Hlompho Kekana has vowed to continue fighting for his place at the club he loves and hopes his lack of game is not a ploy ...
Sport
1 year ago

Bafana Bafana find themselves in a must-win situation when they take on the Black Stars of Ghana in a crucial Africa Cup of Nations (Afcon) qualifier ...
Sport
1 year ago