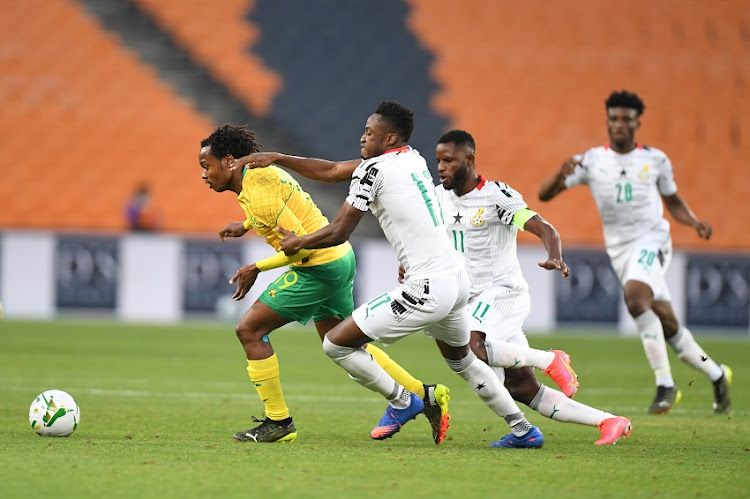 Bafana Bafana edged Ghana, but missed chances, in a 1-1 draw at FNB Stadium on Thursday evening and now know beyond doubt that a win or draw in their final Group C qualifier against Sudan in Khartoum on Sunday will see them reach the 2021 Africa Cup of Nations.

Ghana’s point (taking them to 10), by mathematical permutations, saw them qualify, and they will aim to end top of the group by beating Sao Tome and Principe in their final matchup.

The goals came in a mini-flurry just after the break, Netherlands-based Mohammed Kudus putting Ghana ahead against the run of play in the 49th minute, Brighton forward Percy Tau equalising three minutes later, in the 52nd.

SA, perhaps marginally less depleted by the circumstances surrounding the match, bossed Ghana in the first half, and edged the second less convincingly, but missed chances throughout.

Coach Molefi Ntseki has announced his Bafana Bafana’s starting line-up for the all important Africa Cup of Nations (Afcon) qualifier against Ghana at ...
Sport
1 year ago

For Bafana (now on 10 points), Thursday’s draw means their mission in their final match is beyond doubt and any looming scientific calculator permutations that might have been considered should they have beaten the Black Stars go out the window. Though, effectively, SA were always going to need a draw or win in their last match against Sudan (nine points) anyway to be sure of reaching Cameroon 2021 — now they just know that for sure.

Thapelo Morena and Sifiso Hlanti were wingbacks outside the central midfield pair of Rivaldo Coetzee and Andile Jali, behind a front trio of Tau and Themba Zwane  outside Ruzaigh Gamildien.

Ghana, like SA hit by withdrawals as European clubs declined to release players due to Covid-19, had arrived without stars Andre and Jordan Ayew and Jonathon Partey.

But they still had Baba Rhaman, on loan from Chelsea at PAOK in Greece, at right-back; Amiens’ Nikolas Opoku at centreback, and the 20-year-old Ajax Amsterdam forward Kudus upfront.

Bafana Bafana coach Molefi Ntseki has questioned the apparent Afro-pessimism from European clubs that has seen squads across the continent decimated ...
Sport
1 year ago

Bafana’s intensity put Ghana firmly on the back foot throughout the first half, and in the first half-hour Morena could have had a brace, as a home team with impressive shape and moving the ball at speed missed chances to take an early lead.

Within five minutes Ghana lost the ball defending in their area, and it was worked to Morena with a lot of time and space on the right, who struck the netting centimetres from the top-right corner.

Jali had to limp off injured, replaced by Ben Motshwari, in the 25th.

Tau, heading wide earlier, then skipped past two defenders just inside the box and fed Morena, who this time shot low into the netting.

After administering the pressure in the opening half, minutes into the second SA conceded too easily.

Why win or lose against Ghana, Bafana almost certainly still need a draw in Sudan

Sudan’s Africa Cup of Nations win against Sao Tome and Principe has left three teams in Group C on nine points, and a complicated set of scenarios ...
Sport
1 year ago

Winger Kwame Opoku ran through the middle and slipped a pass to Kudus, who produced a slick touch past Xulu, and ran around the centreback, then finished past Williams.

SA hit straight back. Gamildien progressed down the right channel and passed through for the run into acres of space on the right of Tau, who picked his spot low past goalkeeper Razak Abalora.

With 10 minutes remaining Tau made the running on the right, and played a ball across goal that fell to Maela, lurking outside the area, whose dipping strike forced an awkward stop from Abalora.