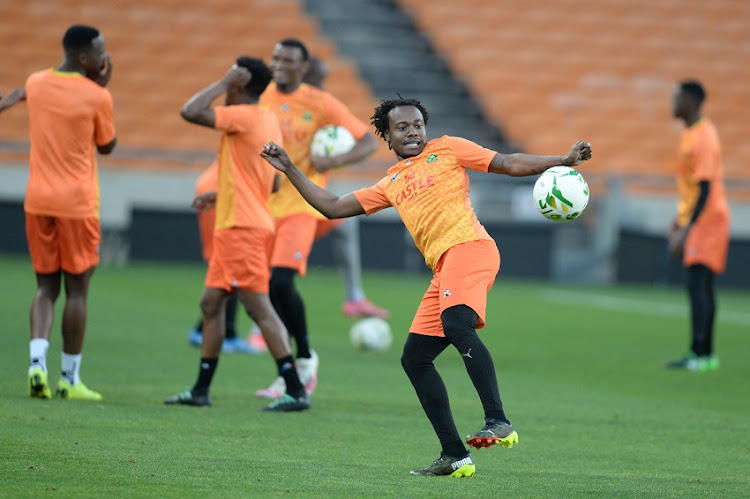 Percy Tau is aiming to replicate his heroics against Libya that saw Bafana Bafana qualify for the last Africa Cup of Nations when they meet Sudan at Al-Hilal Stadium in Omdurman on Sunday needing a draw to reach Cameroon 2021.

In doing so‚ Tau could also finish top scorer in the qualifiers for Cameroon 2021‚ which has been delayed by Covid-19 to January and February next year.

Coach Molefi Ntseki has announced his Bafana Bafana’s starting line-up for the all important Africa Cup of Nations (Afcon) qualifier against Ghana at ...
Sport
6 months ago

For a second Nations Cup qualifying campaign in succession Bafana need a draw away against tricky opponents. Under Stuart Baxter they won 2-1 against Libya in an away match played in neutral Sfax‚ Tunisia‚ needing a draw to reach Egypt 2019. Tau scored both goals to end the 2019 qualifiers on four strikes.

Asked if Bafana can replicate their heroics of 2019 on Sunday‚ Tau pointed out that Sudan’s late form had provided a spanner in the works for the supposed two favoured teams in Group C.

“Look I think we are in a difficult group. And other teams are also finding it difficult‚” he said.

“When Sudan win and they have nine points it’s different to how it was when they had six points. But then‚ we’re looking forward to the next game.

“And like I’ve said before‚ if it means we have to win away we’ll still celebrate the same way we would have loved to celebrate [against Ghana]. And it will never change.

“It happened before‚ and we would love it to happen again. There’s still another match for us.”

Bafana Bafana edged Ghana, but missed chances, in a 1-1 draw at FNB Stadium on Thursday evening and now know beyond doubt that a win or draw in their ...
Sport
6 months ago

The permutations of the head-to-head ruling had left Thursday’s game against Ghana effectively a training match. Win‚ lose‚ or draw‚ SA would need a win in Sudan‚ by virtue of having beaten the East Africans 1-0 in the first round in November 2019.

Still‚ a defeat would not have been the result coach Molefi Ntseki and his team would have wanted to take to Sudan‚ who have hit form with a 1-0 home win against Ghana and Wednesday’s 2-0 away win against Sao Tome and Principe.

Bafana’s task becomes harder because Bongani Zungu on Tuesday agreed to join the team in Sudan‚ but Rangers e-mailed a refusal on Wednesday. Zungu’s best midfield replacement‚ Andile Jali‚ did not travel because of the groin injury he sustained against Ghana.

Temperatures of close to 40 °C for the 4pm local and SA time kickoff are another obstacle‚ as is Sudan’s burning desire to reach their first Nations Cup since 2012.

Tau has recovered from the knock that saw him limping after the Ghana game‚ and is the key performer in attack again. Left-back Sifiso Hlanti joined the squad late on Friday evening after documentation issues.

Percy Tau on his challenges at English side Brighton & Hove Albion: 'I just have to go in fighting'

Percy Tau has always fought past the hurdles in his career‚ and the Bafana Bafana international whose big heart has played a role in the nickname ...
Sport
7 months ago

Sudan’s strong effort in Group C has been masterminded by experienced coach Hubert Velud. The Frenchman has coached Algerian outfits ES Setif and USM Alger‚ and Tunisian club Etoile du Sahel‚ and in 2016 won the Democratic Republic of the Congo league and Caf Confederation Cup with crack outfit TP Mazembe.

Sudan showed themselves to be compact and difficult to penetrate when Bafana beat them at FNB.

An advantage to Velud’s side‚ as squads have been decimated by Fifa’s circular saying clubs do not have to release players due to Covid-19‚ is that Sudan are always predominantly locally based‚ and the players drawn mostly from their two best clubs‚ Al-Hilal and Al-Merrikh.

Bafana Bafana coach Molefi Ntseki has questioned the Confederation of African Football’s scheduling that will see Sudan have an extra day to travel ...
Sport
6 months ago

Bafana Bafana forward Percy Tau is pleading with South African football lovers to understand that the national team are doing their best under ...
Sport
6 months ago

Why win or lose against Ghana, Bafana almost certainly still need a draw in Sudan

Sudan’s Africa Cup of Nations win against Sao Tome and Principe has left three teams in Group C on nine points, and a complicated set of scenarios ...
Sport
6 months ago

Bafana Bafana’s bid to qualify for the Africa Cup of Nations finals in Cameroon next year has just taken a tricky twist after group rivals Sudan ...
Sport
7 months ago