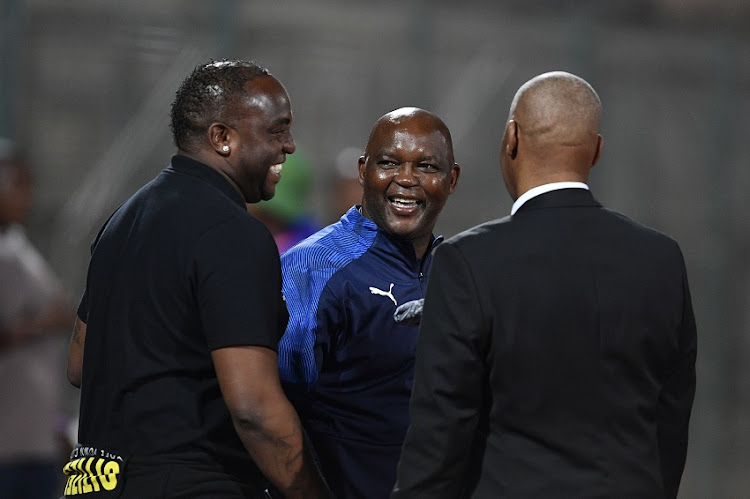 Former Bafana Bafana coach Clive Barker believes that besieged incumbent Molefi Ntseki must be removed from the job and replaced by either Benni McCarthy or Pitso Mosimane.

Bafana failed to qualify for the tournament in Cameroon next year after a 2-0 defeat to Sudan in Khartoum on Sunday and an incredibly candid Barker said he always expected Ntseki to struggle in the challenging seat he assumed in August 2019.

“I have always said that you have to have coaches that have won things. I mean‚ not to be against coach Molefi Ntseki‚ I think his mannerisms are good and I think his intentions are good‚ but really you have got to win things. I feel for him‚” Barker told TimesLIVE on Monday.

The 51-year-old Botshabelo-born Ntseki is a dead man walking after Sunday’s 2-0 defeat saw the unheralded coach fail to deliver on his mandate to qualify the team for the Africa Cup of Nations (Afcon) finals.

“I think it is terrible that we have all these facilities that we have got and just be knocked out so early. It is just crazy. The quality of football leaves quite a bit to be desired‚” said Barker.

Ntseki’s appointment two years ago raised eyebrows when he was announced as Stuart Baxter’s successor because of a low-profile top-flight experience and an empty trophy cabinet as a coach.

Beleaguered coach Molefi Ntseki says he is aware of the "emotional pain" he has caused South Africans after Bafana Bafana failed to qualify for the ...
Sport
1 year ago

The 76-year-old Barker‚ who guided Bafana to victory in the 1996 Afcon finals and is the only coach to ever do so‚ criticised the decision to appoint Ntseki in the first place.

“I mean‚ it is crazy. You can’t go there and be in charge of a national team and you have never won anything. I can’t recall if he has won something and if he has won‚ then I do apologise.”

Barker suggested that even Ntseki’s assistant coach Arthur Zwane could have been a better option for the Bafana job.

“Arthur Zwane sits there and he has won all types of trophies‚ how can he go there and have a guy who has never won anything?”

Barker said McCarthy‚ the AmaZulu coach who has got Usuthu purring in the domestic league‚ still enjoys legendary status as Bafana’s all-time leading goal scorer‚ and Pitso Mosimane‚ the all-conquering former Mamelodi Sundowns coach and current Al Ahly boss‚ should have been considered for the national team job instead of Ntseki.

“I think they should have thought of maybe someone like Benni McCarthy or people like that, who can come in and turn this whole thing around‚” said Barker.

The veteran coach said there should be a conversation between the SA Football Association (Safa) and AmaZulu to allow McCarthy to vacate his club duties for Bafana.

“No doubt about it‚ he [McCarthy] is a breath of fresh air. He knows the game at the highest level and he has played and scored at the highest level. He has made his mark at national level as a player and he is now making his mark as a coach locally. He is the guy that should be able to take us forward.

“He is the flavour of the month at the moment - and he should be, too. He has done really well as a coach‚ the people respond well to him and they do it for a reason - because he has delivered the goods before.”

Barker said the country has an abundance of talented coaches who have proven themselves and advised Safa to take a closer look at some of them.

“We have got coaches here at home and we must pay them to get the team in decent situations‚ and give them the support‚” he said.

“The only thing is to get results. We have got to get young Benni or a Pitso Mosimane who has won at the highest level in Africa.

“We have got people who have won things. There are talented people. There is Shakes Mashaba‚ who has had a tough time as coach.

“I think if they get everybody together that has coached Bafana, that would be the way to go. I think those people have the right ideas.

“We definitely have the right quality of players and we have got the right set-up.”

The Cameroon Afcon finals will be the fourth time Bafana have failed to qualify in seven previous qualifiers.

Beleaguered Bafana Bafana coach Molefi Ntseki has owned up and said the blame for the team's failure to qualify for next year's Africa Cup of Nations ...
Sport
1 year ago

Embarrassing! Ntseki’s job on the line after Bafana fail to qualify for Afcon

Bafana Bafana forward Percy Tau is pleading with South African football lovers to understand that the national team are doing their best under ...
Sport
1 year ago