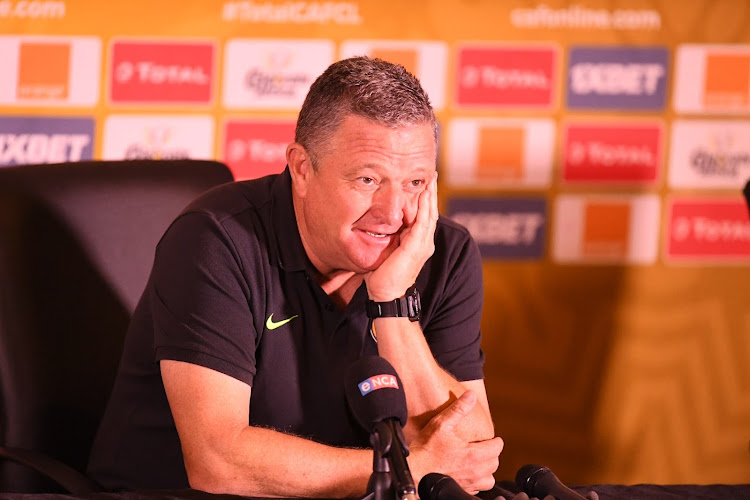 Kaizer Chiefs coach Gavin Hunt could only chuckle in response and answer in the negative, asked if the once-again vacant Bafana Bafana job is anywhere on his mind as Amakhosi prepare to meet Wydad Casablanca on Saturday.

Chiefs meet Wydad, who thrashed the Soweto giants 4-0 in a match officiating-affected clash in neutral Burkina Faso on February 28, at FNB Stadium (kickoff 6pm) aware that a victory could get Amakhosi right-back in the fray in Group C of the 2020-21 Caf Champions League.

The game comes days after the SA Football Association (Safa) chose to release yet another coach from their Bafana contract. Molefi Ntseki was axed on Wednesday after the national team’s failure to reach the 2021 Africa Cup of Nations with a 2-0 defeat away to Sudan on Sunday.

And of course, like a stuck record, four-time Premiership-winner Hunt’s name is already among those being speculated on as a potential replacement — as it is each time the national job becomes vacant.

Hunt was asked if the Bafana job, and prospect of Safa coming calling, was anywhere on his mind. He could not suppress a laugh at the question.

“How many times have we been down this road,” the Chiefs coach chuckled.

“Nowhere near. My mind is on Wydad on Saturday. That’s the most important game for me.”

Chiefs have drawn 0-0 against Guinea’s Horoya at home, then lost heavily to Wydad, then won against Angola’s Petro de Luanda 2-0 at home and drew 0-0 with them away in their first-ever Champions League group phase.

Wydad lead the group with 10 points, Horoya are second on five, and Chiefs in third place on goal difference, also on five points.

Powerhouse Wydad were the 2017 champions of Africa’s premier continental club competition, and runners-up in 2011 and 2018-19.

Kaizer Chiefs coach Gavin Hunt has dismissed speculation that Khama Billiat is not in the club’s plans after the 2020-21 season.
Sport
3 weeks ago

Ex-Kaizer Chiefs assistant coach Farouk Khan says his former employers have lost their culture and philosophy and this is one of the reasons behind ...
Sport
3 weeks ago
Next Article