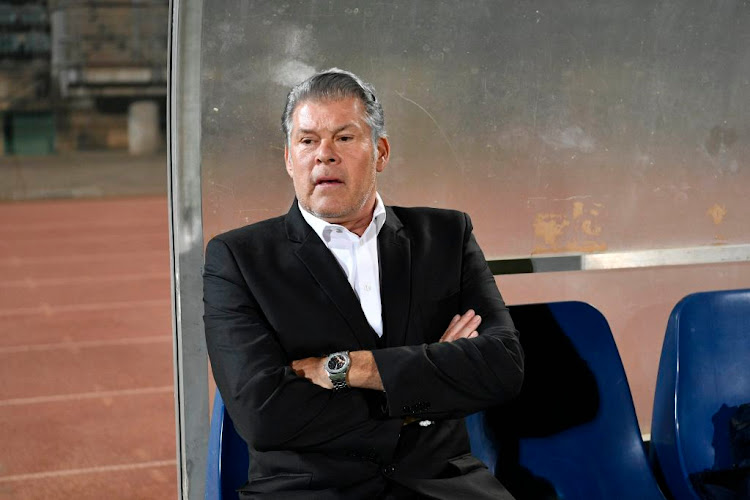 Controversial Belgian Luc Eymael has emerged as a strong favourite for the vacant Chippa United coaching job and is expected to be named as the Eastern Cape side's new mentor as early as Tuesday.

But Eymael will arrive with a lot of complications and Mpengesi has written to the South African Football Association (Safa) to seek clarity on whether the Belgian is allowed to work in SA after the controversy the club courted when they attempted to hire him in December last year.

An insider told TimesLIVE on Monday morning that the strongly-worded letter was sent to Safa on Sunday and, given its contents, Eymael is almost certain to get the job.

“The club is definitely looking at Luc Eymael to come in, but they have written to Safa to ask for guidance on the next step. The views of the Eastern Cape premier's office and regional political heads might also be considered because of what happened the last time [the club tried to hire Eymael]," the insider said.

The Belgian will come with a lot of baggage as Safa furiously opposed his appointment when Mpengesi attempted to hire him in December.

The decision raised eyebrows as the Belgian was fired with immediate effect by Tanzania Premier League side Yanga Africans in July last year for calling the club's fans “illiterate and monkeys”.

Safa registered their unhappiness with Mpengesi's decision in a statement issued after the confirmation of Eymael's appointment.

The mother body said at the time they would write to the minister of home affairs to express their objection to the granting of a work permit for Eymael. Safa also said they would request the Ethics Committees of Fifa and Safa to “charge Mr Eymael, as his despicable conduct is a violation of the codes of both bodies”.

Mpengesi said in the letter sent on Sunday that the negativity that greeted the club after Safa's response was very damaging to their brand.

“In response to the above events, Chippa United approached Fifa to clarify whether there was indeed any substance to the allegations against Eymael, or any ban issued against him coaching, following such allegations,” reads part of the letter.

“Fifa responded that they would look into the matter and that would in effect go through their investigatory chamber. No confirmation of any charges and/or sanctions against Eymael have been forthcoming. Chippa United FC currently find themselves without a head coach after terminating its relationship with Dan Malesela on 3 April 2021. With limited options of available coaches, it is now imperative that Safa clarify its position (and more specifically legal position) on:

5.1. The basis upon which Safa stated its intentions to approach the Ethics Committees of both Safa and Fifa;

5.2. Whether Safa has indeed proceeded as intended and, if so, the outcome of such proceedings;

6. In the event that there is no ban on any club soliciting the services of Eymael, no finalised or pending proceedings or any other legal position that prevented Chippa United FC at the time of Safa’s statement and/or currently, we request that Safa immediately officially issues a letter to Chippa United FC in writing to that effect. It is furthermore proper that in such case Safa issue a public apology per official statement for the unfounded allegations that should receive the same prominence and distribution as the original statement.

7. Circumstances dictate that a response to the above is urgent.

Safa seemingly softened their original stance last month and the coach is apparently free to work in SA again.

He had taken the matter to the Fifa Ethics Committee and Safa said at the time they could not deny him the right to be employed in SA, nor could they grant him permission to enter or exit the country.

The sports mother body said their objection was based purely on the seriousness of the allegations against him, as they go against their statutes.

After the initial outcry about Eymael,, Mpengesi withdrew his appointment and hired Malesela as coach.

But the club could still face a backlash from the Eastern Cape provincial government, political leaders, observers and fans if he takes up the coaching reins, as Eymael is a largely polarising figure.

The provincial government slammed his short-lived appointment in December last year and also fired a salvo at Mpengesi in the process.

“The Eastern Cape provincial government is concerned that Chippa United Football Club has appointed Luc Eymael as their head coach, even though they know about the racist and offensive remarks he made about black people supporting his former club,” the province said in a statement.

“South Africa is founded on principles of human dignity, achievement of equality, advancement of human rights, freedoms and nonracialism.

“We therefore cannot have a soccer coach who behaves in a manner that is contrary to these values.”

The statement went on to say that Eymael’s remarks had no place in SA society.

“We don’t think a football club playing in our professional soccer league and a club that is financially supported by the municipalities of the Eastern Cape government should be coached by an unrepentant racist spewing offensive and derogatory statements about other human beings.

“It is more disturbing that the owner of Chippa United, Siviwe Mpengesi, does not see anything wrong with the racist and offensive remarks made by Eymael against black people who support the former club he coached.

“Mpengesi should fully understand the pain caused by racism. We expected him to be in the front line of fighting against racism to defend the dignity of people insulted by Eymael in that racist and offensive statement he made.”

Chippa United bowed to public and government pressure on Thursday by withdrawing the appointment of controversial coach Luc Eymael.
Sport
5 months ago