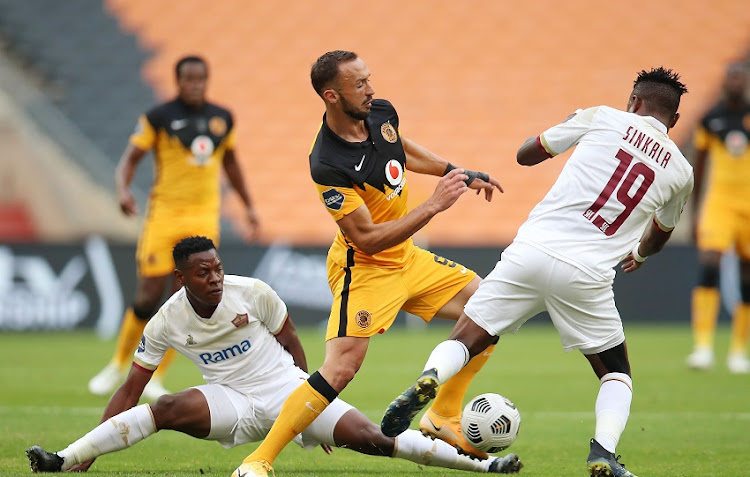 Kaizer Chiefs and Stellenbosch FC dished out a stunning second-half performance that produced four quality goals as they settled for a 2-2 DStv Premiership stalemate at FNB Stadium on Tuesday.

When they made their way back to the dressing room at the break, it didn’t look like there would be goals but they returned with a better work rate, with Stellenbosch twice taking the lead through Nathan Sinkala and Phathutshedzo Nange.

Chiefs showed composure to claw their way back into the game on two occasions through a well-taken header by substitute Leonardo Castro and a late equaliser by enterprising midfielder Nkosingiphile Ngcobo.

During the opening exchanges, there were a few notable chances created by both teams, with the likes of Bernard Parker, Lebogang Manyama and Samir Nurković in the forefront for Chiefs.

Stellenbosch also had their attacking moments, mostly through speedy Ashley du Preez, Augustine Dimgba and Júnior Mendieta, but they could not find their way past Chiefs goalkeeper Daniel Akpeyi.

Itumeleng Khune fell out of love with the game, his Kaizer Chiefs coach Gavin Hunt said of his Bafana Bafana goalkeeper who so recently experienced ...
Sport
6 months ago

One of the best chances for Chiefs was for Manyama shortly before the break after he was released by Ngcobo but his shot was parried away to safety by alert Stellenbosch goalkeeper Sage Stephens.

Stellenbosch returned from the break with more intent and they nearly took the lead after 47 minutes through Mandieta, who was denied by Akpeyi after a wonderful attacking move that included Dimgba.

Just before the hour mark, Willard Katsande went down inside the box after he was tackled by Sinkala but referee Michael Mosemeng waved play-on much to the frustration of Chiefs players.

In pursuit of the much-needed goals in the second half, Chiefs coach Gavin Hunt introduced midfielder Khama Billiat and striker Leonard Castro after 65 minutes for Manyama and Nurković.

The move paid dividends as Billiat was a constant irritation for the Stellenbosch defence while Castro launched Chiefs’ comeback with his well-taken header.

Stellenbosch opened the scoring through a powerful close-range header by Sinkala as he rose above everyone in the box to connect with a well-laid corner kick by Mandieta after 71 minutes.

For the opening goal, Akpeyi and his defender Eric Mathoho were at fault as their failure to communicate properly allowed Sankala to connect with the ball from Mandieta’s corner kick.

Kaizer Chiefs coach Gavin Hunt has revealed that long-term injury concern Khama Billiat is available and might get a run in Amakhosi's big Caf ...
Sport
6 months ago

Stellenbosch’s lead did not last too long as substitute striker Castro equalised six minutes later with a quality header of his own from a cross by Reeve Frosler from the left wing.

Castro, who got injured in the process of scoring the equaliser for Chiefs and needed medical attention, outjumped Mogamad de Goede to give goalkeeper Stephens no chance.

But the drama was not over as Stellenbosch substitute midfielder Phathutshedzo Nange helped his team to retake the lead after 79 minutes with another high-class header as he connected with a cleverly taken cross by Dimgba.

Six minutes from time, Ngcobo pulled another one back for Chiefs as he found the back of the net with a close-range shot that sailed past the outstretched hands of Stephens.