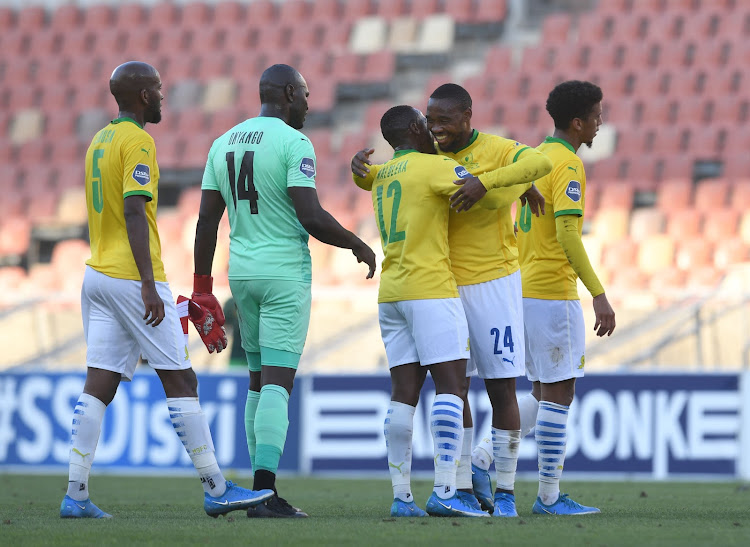 The Mamelodi Sundowns machine continued to grind out the results almost effortlessly after the unbeaten Premiership leaders brushed past Tshakhuma Tsha Madzivhandila (TTM) in an impressive 3-1 win at the Peter Mokaba stadium in Polokwane on Tuesday afternoon.

The Premiership champions had to claw their way back from a goal down after Thembisani Nevhulamba beat Sundowns goalkeeper Denis Onyango with a header in the 18th minute.

But Sundowns fought their way back into the match when Rivaldo Coetzee's header sneaked past home side goalie Washington Arubi at the stroke of halftime.

The Brazilians picked up where they left off in the second half and maintained their chokehold on the home side when Sphelele Mkhulise gave the visitors the lead in the 69th minute.

Sibusiso Vilakzi wrapped up the victory in a neat little bow when he scored the third to make the game safe nine minutes from time.

The result gave the unbeaten front-runners a six-point lead at the summit and while second-placed Golden Arrows and AmaZulu are still trying to keep them in their sights‚ it would be difficult to bet against the Brazilians retaining the title this season.

It was certainly a day to remember for co-coaches Manqoba Mngqithi‚ Rulani Mokwena and Steve Komphela as their charges displayed the kind of championship-winning resolve that is required to win titles.

They had to work very hard for the result‚ especially in first half when the home side threatened to spoil the party for the Pretoria visitors.

The two goalkeepers put on a show during the opening exchanges and made several breathtaking saves that were largely the reason only four goals were scored during the 90 minutes.

Arubi‚ in particular‚ was in sparkling form and after Nevhulamba had headed the opening strike past Onyango‚ the Brazilians threw men forward and laid siege to his goal area.

The visitors took turns asking question of Arubi and as the game progressed one got the sense that it was only a matter of time before he was finally breached.

Thapelo Morena was denied by the goalkeeper in the 28th minute in a one-on-one situation but Sundowns were not done and kept on coming.

Thabo Mnyamane could have given the hosts a second goal in the midst of the siege when he had Onyango at his mercy after the ball had suddenly swung to the other end of the pitch‚ but the Sundowns goalkeeper recovered in time to make the crucial save.

Arubi made another stunning save moments later at close range to deny Peter Shalulile.

Rushine de Reuck thought he had finally managed to beat the stubborn goalkeeper in the 42nd minute‚ but Arubi managed to save on the line.

Rivaldo finally beat Arubi at the stroke of halftime to level matters for Sundowns.

The equaliser paved the path for the comfortable win and Sundowns could even afford the luxury of missing a penalty after Gaston Sirino blasted his spot kick into the stands. Themba Zwane was hacked inside the area by Lehlohonolo Nonyane and referee awarded the spot kick.

Sundowns now have 11 matches left this season and it remains to be seen if they complete the entire campaign unbeaten‚ as some observers are suggesting.

Controversial Belgian Luc Eymael has emerged as a strong favourite for the vacant Chippa United coaching job and is expected to be named as the ...
Sport
1 year ago

Cadiz defender Juan Cala denied racially abusing Valencia's Mouctar Diakhaby during Sunday's 2-1 win in La Liga, saying he had been caught up in "a ...
Sport
1 year ago

Chippa United have boosted their squad with the acquisition of former Mamelodi Sundowns and Free State Stars attacking midfielder Luyolo Nomandela on ...
Sport
1 year ago

Siphelele Ntshangase’s agent‚ Jazzman Mahlakgane‚ says there is interest from clubs in signing the talented playmaker, who was released by Kaizer ...
Sport
1 year ago

Kaizer Chiefs coach Gavin Hunt was reluctant to comment on Wydad Casablanca’s poor amateur theatrics and gamesmanship both away and on Saturday ...
Sport
1 year ago

Lamontville Golden Arrows coach Mandla Ncikazi has committed himself to improving the team’s retention of the ball and creating chances after his ...
Sport
1 year ago

Swallows FC again stole a point in the final minutes of a premiership match and coach Brandon Truter admitted that the run of last-gasp results is ...
Sport
1 year ago