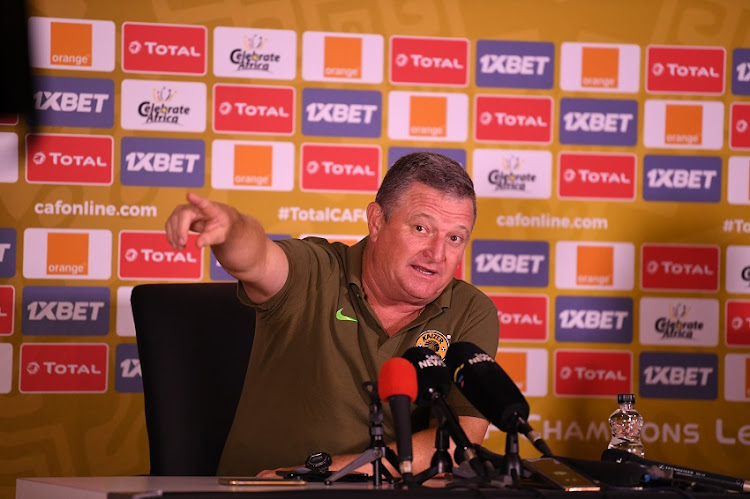 Gavin Hunt has praised the “huge fight” of Kaizer Chiefs and their “great achievement” reaching the Caf Champions League quarterfinal with a dramatic 2-2 Group C draw against Horoya in Conakry‚ Guinea on Saturday night.

Chiefs twice came back from a goal down at Stade General Lansana Conte to earn the scoring draw they needed to progress past a big‚ physical and classy Horoya.

“We knew that to qualify we had to get a scoring draw or win the game. It was a huge fight for the team‚ a huge effort‚” Hunt said after the game.

“It’s going to be a tough‚ tough thing who you’re going to draw now. We’ll worry about that when we get to that.”

Beanpole centre-forward Yakhouba Gnanga Barry headed Horoya ahead two minutes into injury time of a dominant first half for Horoya‚ with Daniel Cardoso equalising from the penalty spot in the 67th.

Four-time league winner Hunt was asked how guiding a transfer ban affected Chiefs‚ who have battled miserably to ninth place at the two-thirds stage of the DStv Premiership‚ to the Champions League quarters ranks. He was quick to remind that Amakhosi have not won silverware.

“We’ve won nothing – we’ve just got through. This is a helluva competition to play in‚” he said.

“We haven’t signed a player – nothing. You’ve got to look at it from that perspective. With the squad we’ve got‚ to try and go on this front is a big achievement so far‚ and we’ve over-achieved.

“But‚ as I said‚ we haven’t won anything. To win league titles is obviously the ultimate. Four‚ as you say‚ and won the first division as well‚ so five‚ and other trophies.

“But obviously this [the Champions League] is the flagship‚ and this is the one that’s on the radar now. We’ve got a taste of it – good experience - and let’s see who we draw and where we go.

“But we’ve still got to get our domestic form right now.”

The next Bafana Bafana coach will either be Frenchman Philippe Troussier or Portuguese coach Carlos Queiroz.
Sport
1 year ago

Machines. They come in all shapes, form and sizes, but the important thing is what they deliver.
Sport
1 year ago

Manchester City slip up at home against 10-man Leeds

Mamelodi Sundowns co-coach Rulani Mokwena has vehemently insisted that star striker Peter Shalulile is not for sale.
Sport
1 year ago

Premiership leaders Mamelodi Sundowns returned to winning ways after they beat troubled Eastern Cape side Chippa United in a league match on Monday ...
Sport
1 year ago