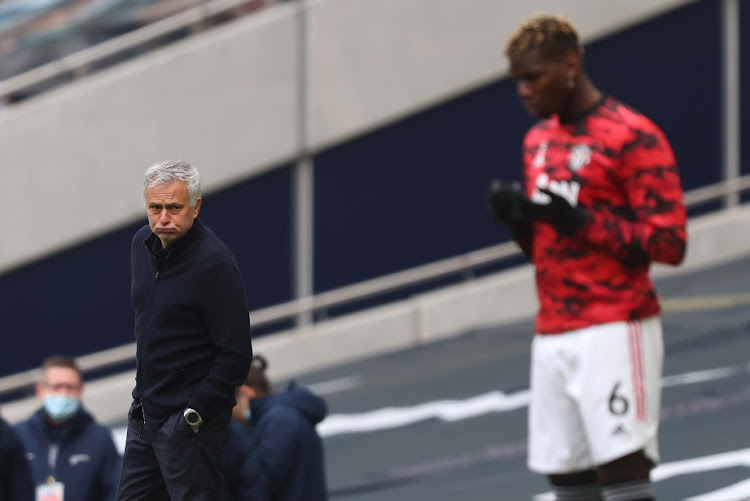 Jose Mourinho, manager of Tottenham Hotspur, reacts as Paul Pogba of Manchester United takes a moment of reflection prior to the Premier League match at Tottenham Hotspur Stadium in London on April 11, 2021.
Image: Marc Atkins/Getty Images

Frenchman Pogba said that his former Old Trafford manager Mourinho was known for ignoring players once he benched them, which was in stark contrast to current United boss Ole Gunnar Solskjaer who never casts players aside.

Mourinho was sacked by United in December 2018 after their worst start to a season for 28 years and replaced by Solskjaer, who was appointed as caretaker-manager before he was given the job full-time after an upturn in results.

Mourinho’s final months at United were underlined by his breakdown in relationships with players including the club’s record signing Pogba, who he also stripped of the vice-captaincy.

“I would like to say that I couldn’t care less with what he says ... Not interested at all,” Portuguese Mourinho said after Tottenham’s 2-2 Premier League draw with Everton on Friday.

Pogba’s comments followed United’s 3-1 league victory over Tottenham last weekend. Mourinho’s side, who are seventh in the table with 50 points from 32 matches, host Southampton on Wednesday.

Man United continued their fine run of form with a win against Spurs, closing the gap between leaders City to 11 points
Sport
1 month ago

Mourinho brushes off critics, says he's still one of most important managers

Tottenham Hotspur boss Jose Mourinho said he had learnt to turn a deaf ear to the criticism of his coaching methods and that he remains "one of the ...
Sport
1 month ago
Next Article