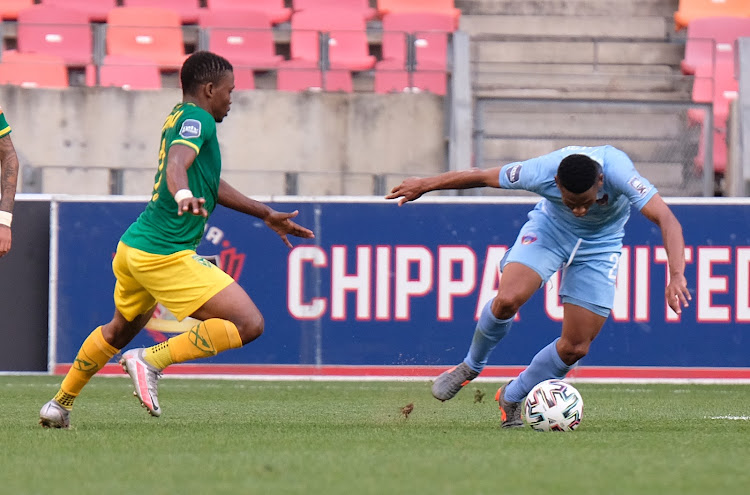 Thabiso Lebitso of Chippa United (R) and Lindokuhle Mtshali of Golden Arrows (R) tussle for the ball during the match.
Image: Michael Sheehan/BackpagePix

Lamontville Golden Arrows missed an opportunity to gain solid ground against Premiership leaders Mamelodi Sundowns after they were held to an away goalless draw by relegation-threatened Chippa United in Gqeberha on Sunday.

A win at the Nelson Mandela Bay Stadium would have seen Arrows cut Sundowns’ lead to three points after the leaders stumbled on Sunday‚ following a defeat for the first time in the DStv Premiership this season as Kaizer Chiefs came from behind to win by two goals in two minutes for a 2-1 victory at Loftus also on Sunday.

Mandla Ncikazi’s Arrows remain third on the log on 42 points after 24 matches and trail Sundowns by five points. They will be kicking themselves after their KwaZulu-Natal rivals claimed second spot with a 2-1 home victory over TS Galaxy on Saturday to move to 44 points.

Chippa stretched their winless run in the league to 11 matches and remain second from bottom and three points shy of the automatic relegation spot‚ which is currently occupied by Black Leopards‚ who earned a valuable point with a 1-1 draw against SuperSport United in Thohoyandou on Saturday.

The have won just three of their 24 league matches so far‚ drawing nine and losing 12 for their 18 points.

Chippa will find their battle against relegation even tougher in their next assignment when they travel to Johannesburg for Wednesday’s confrontation with a Chiefs team that will be high on confidence after inflicting a first league defeat on Sundowns this season‚ while also catapulting themselves into the top half of the log table in the process.

Arrows also face a trip to Gauteng where they will have another opportunity to make up ground on Sundowns when they visit the leaders at Loftus also on Wednesday.

Best thing about Super League is it did not happen, says Klopp

The most positive thing about the attempt by 12 elite clubs to form a closed European Super League (ESL) is that “it did not happen“, Liverpool ...
Sport
3 weeks ago

Florentino Perez is not used to losing, either when signing soccer stars to grace the immaculate turf of Madrid's Santiago Bernabeu Stadium or in ...
Sport
3 weeks ago

Carlos Queiroz appears to be the man the SA Football Association (Safa) have resolved to appoint as the next Bafana Bafana coach‚ following ...
Sport
3 weeks ago

Safa president Danny Jordaan has suggested his previous CEOs are at fault for lack of implementation on promised development programmes, such as the ...
Sport
3 weeks ago

The SA Football Association’s (Safa) expected announcement of its new Bafana Bafana head coach in Saturday has been postponed.
Sport
3 weeks ago

As Bafana Bafana await the announcement of yet another new coach, we take a look at what’s happened to the team since the 1996 glory days.
Sport
3 weeks ago

While Kaitano Tembo is happy with his team's performance in the draw against Black Leopards‚ the SuperSport United coach believes his charges should ...
Sport
3 weeks ago
Next Article