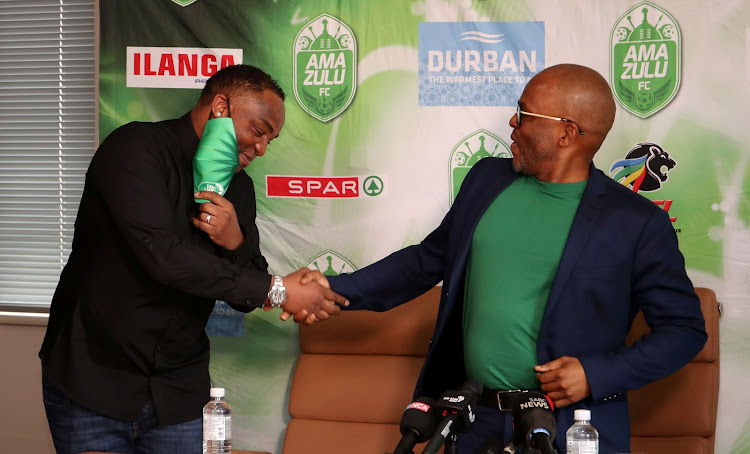 AmaZulu owner-chairman Sandile Zungu says Benni McCarthy is not interested in taking over the vacant Bafana Bafana and that the former striker has an important project to focus on with Usuthu.
Image: Muzi Ntombela/BackpagePix

AmaZulu boss Sandile Zungu has issued a strong statement to the SA Football Association (Safa) and said his mentor Benni McCarthy is not available to coach Bafana Bafana.

McCarthy has been linked to the Bafana coaching job. He muddied the waters when he told foreign media he would be happy to accept the job that became vacant when Molefi Ntseki was sacked last month.

“We have no interest in letting Benni leave AmaZulu FC.

"He is doing a fantastic job‚ we are enjoying him and he is equally happy at AmaZulu‚”  Zungu said in his short but emphatic response to TimesLIVE on Tuesday.

Safa appear to be nowhere near appointing a new Bafana coach after they were reportedly snubbed by their top two preferred candidates‚ Pitso Mosimane and Carlos Queiroz, last week.

The soccer body was supposed to announce the man to take Bafana into the future last weekend but postponed the hugely anticipated press conference at the 11th hour‚ citing issues with international “Covid-19 travel" as the reason.

With no word on Mosimane and Queiroz‚ Safa are believed to have set their sights firmly on McCarthy‚ but Zungu has previously insisted they will resist attempts to destabilise the team.

Earlier this month the 43-year old outspoken McCarthy told an English-based online publication he would consider being the next Bafana coach if approached by Safa.

Whoever is going to be the new coach will replace Ntseki‚ who was released from his contract last month after the national team’s failure to qualify for the 2021 Africa Cup of Nations.

Safa president Danny Jordaan has said the association will spare no expense in hiring the right coach for the job‚ even though the organisation has had well-documented financial problems over the years.

McCarthy‚ who is in his second coaching job in the top-flight of SS football after Cape Town City‚ has established Usuthu as genuine contenders for the league title.

With six rounds of league matches remaining in their season‚ AmaZulu are sitting second on the DStv Premiership standings and trail log-leaders Mamelodi Sundowns‚ who have played two matches less‚ by three points.

Chelsea coach Thomas Tuchel said on Monday that he was not a fan of the new UEFA Champions League format which will force teams to play more matches ...
Sport
1 year ago