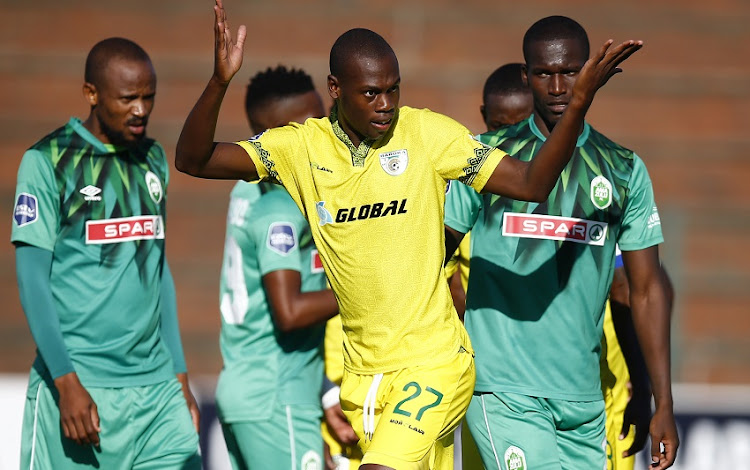 Evidence Makgopa of Baroka during the DStv Premiership match against AmaZulu at King Zwelithini Stadium on May 11 2021 in Durban.
Image: Steve Haag/BackpagePix/Gallo Images

Baroka pulled off a much-needed 1-0 win over fancied AmaZulu during their exciting DStv Premiership encounter at the King Zwelithini Stadium on Tuesday afternoon.

With this result, Usuthu saw their highly impressive 16-match unbeaten run come to an abrupt end while Baroka have significantly boosted their chances of ending the season in the top eight.

This defeat has also possibly ended AmaZulu’s outside chances of upsetting Mamelodi Sundowns, who have a game in hand and a seven point advantage at the top of the log, for the league title.

AmaZulu coach Benni McCarthy, who has transformed this Usuthu side since he joined in December, will be expecting a hugely improved performance in their next league outing against Orlando Pirates on May 26.

For Baroka, they have a short turnaround of matches as their next outing is the Limpopo derby against newly crowned Nedbank Cup champions Tshakhuma Tsha Madzivhandila (TTM) next Wednesday.

Hopes of a nail-biting finish to the season are evaporating fast after premiership leaders Mamelodi Sundowns tightened their grip on the title on ...
Sport
1 year ago

Baroka wasted a good opportunity to open the scoring inside three minutes when Evidence Makgopa failed to find the target from a good position after he intercepted a misplaced pass by Mbongeni Gumede.

Around the 20th minute, AmaZulu twice came close to opening the scoring but Luvuyo Memela was denied by alert Baroka goalkeeper Oscarine Masuluke, and Lehlohonolo Majoro blasted his shot over the cross-bar.

Baroka opened the scoring in style through Richard Mbulu, who controlled the ball he received from Makgopa on the edge of the box before he rifled home a beautiful curling shot that gave Veli Mothwa no chance after 37 minutes.

It was the seventh goal of the season for the enterprising Mbulu, who was a constant thorn for the AmaZulu defence marshaled by Thapelo Xoki and Gumede.

Two minutes from the break, Masuluke produced an excellent diving save to deny Majoro, and on the other end of the field Makgopa watched in disbelief as his shot ricocheted off the upright with Mothwa beaten after a quick counter attack.

It was end-to-end stuff and just after the hour mark, Baroka put together a scintillating attacking move that ended with Ananias Gebhardt missing the target by not much from close range with only Mothwa to beat.

Deep during referees’ optional time, AmaZulu camped in the Baroka half in search of the equaliser but they could not find their way past the defence of Bonginkosi Makume, Denwin Farmer and ‘keeper Masuluke.

The Premier Soccer League: Who's hot and who's not

It seems like the 2020-21 Premier Soccer League campaign has flown over us like those military fighter jets that the big-spending governments put out ...
Sport
1 year ago

Baroka FC improved their chances of finishing inside the top eight for the first time since the Limpopo side's elevation to the top flight of SA ...
Sport
1 year ago