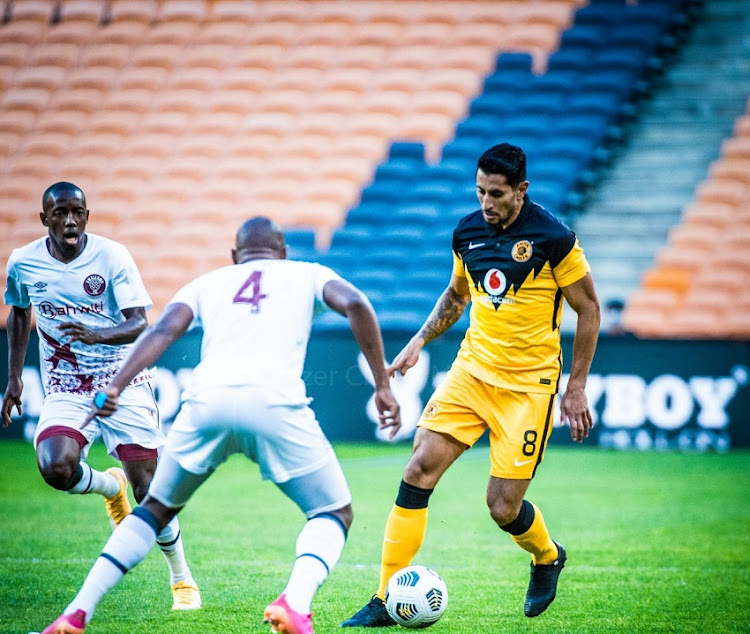 With Kaizer Chiefs struggling to win games, a 1-1 stalemate against Swallows FC on Wednesday evening should not have come as a surprise.
Image: TWITTER/KAIZER CHIEFS

With Swallows FC having established themselves as the undisputed draw kings of the second half of the DStv Premiership, and Kaizer Chiefs struggling to win too, a 1-1 stalemate on Wednesday evening should not have come as a surprise.

Kagiso Malinga’s eighth-minute strike in the Soweto derby at FNB Stadium was cancelled by Leonardo Castro’s 14th-minute opener in a lively start to a relatively entertaining opening half.

The two teams’ cancel culture only increased in a second half where both ventured less, and spent most of the time working hard to negate the other's strengths.

For Chiefs, the effort to notch wins in their final matches continued to hit a wall, and now they have two games to claw out of the bottom half of the log. The wall was a hard-working, fifth-placed Birds, who flew to their start back in the Premiership but, having remarkably still only lost a single game, seem happy now to ride out the end of the campaign preserving their place in the top eight.

Brandon Truter’s Swallows equalled the most draws in a PSL season, 17. They have shared the spoils in 13 of their last 15 games.

But the promoted Birds seem assured the top half, a luxury painfully eluding a side far more established in the top flight recently, and with far greater trophy pedigree, especially since the 1980s.

Amakhosi and their coach Gavin Hunt somewhat embarrassingly have just two wins from 15 league matches, and the bottom half, and perhaps a worse finish than their previous two ninth positions, beckons.

Swallows got the early opener in spectacular fashion. Kamohelo Mahlatsi wide on the left knocked back to left-back Sifiso Hlanti to cross from deep. Striker Malinga surprised marker Ramahlwe Mphahlele, getting on the wrong side of Chiefs’ centre back and stylishly sidefooted a volley that flew past Bruce Bvuma in goal.

Chiefs worked their way back into the game quickly. Their equaliser came from a patient, methodical build-up across the field that resembled a coaching tip video shared on Twitter. It ended with Siyabonga Ngezana floating in a cross to Happy Mashiane, who got above Vuyo Mere to head on to the left upright, Castro getting across to head in the rebound.

Injured Mere had to be replaced by Thabo Matlaba soon after, before Lebogang Mokoena’s drive thudded on to the post.

Both sides seemed to close more, and risk less, in the second half. The changes both benches rang only seemed to entrench the stalemate.

Organisers of #KaizerChiefsProtest: ‘Chiefs fans are the laughing stock of SA’

Organisers of a fan protest planning to march to Kaizer Chiefs’ Village headquarters in Naturena on Friday say supporters of the club are fed up with ...
Sport
1 year ago

From the break Hunt had brought on Reeve Frosler and Dumisani Zuma for Ngezana and Kearyn Baccus, who had been employed to bring muscle up the field behind Castro. Chiefs’ coach added Kgotso Moleko and Samir Nurković, for Castro and Mashiane, in the 70th, and with 10 minutes left Lazarous Kambole replaced Manyama.

Nurković had a tame shot at Virgil Vries with the clock running down, and Kambole drove off target.