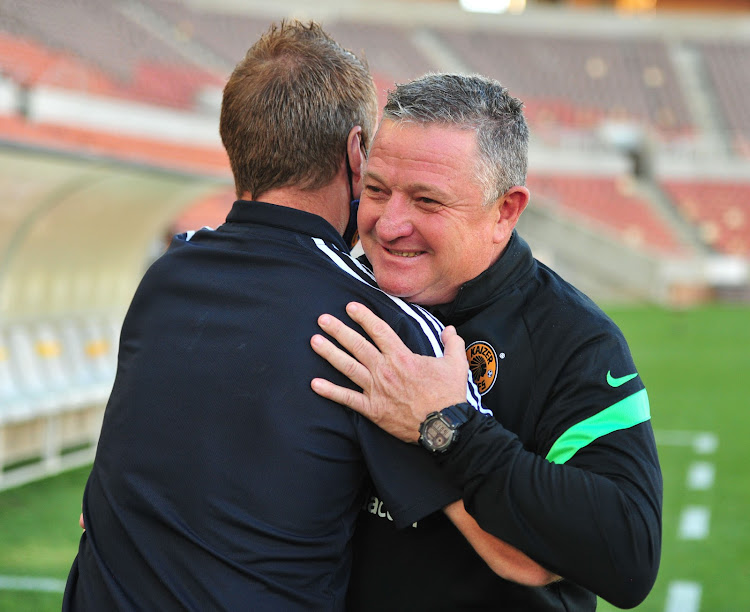 Kaizer Chiefs coach Gavin Hunt has not found himself smiling on too many occasions on the touchline in his first season in charge.
Image: Kabelo Leputu/BackpagePix

Gavin Hunt was laughing at a match situation where he felt if there was a turnover it would lead to a goal‚ and it did‚ the coach explained after Kaizer Chiefs’ 4-0 Caf Champions League quarterfinal first leg deconstruction of Simba FC.

So little has gone Hunt and Chiefs’ way in his first season at the club – where they are in 10th place with three games to go in the DStv Premiership – that when something did turn out favourably it triggered Hunt being in stitches.

Hunt had the giggles when‚ from a turnover‚ Lebogang Manyama’s floated cross found the diving header of Leonardo Castro to beat unfortunate Simba goalkeeper Aishi Manula for a fourth time in the 63rd minute at FNB Stadium on Saturday night.

He said it was because he could see‚ as Simba were in possession‚ that Chiefs had laid out the way he had trained them to without the ball‚ and if they won it there was a high probability of a goal.

“It was because 10 or 15 seconds before that I said what we need to do‚ and the things we work on and where we need to be without the ball.

“And then we turn the ball over‚ and we’re in the right position and the goal came‚” Hunt said.

“So that’s why I laughed – because it was pretty much that you don’t get that [happening] much in football. But it was from an organisational point of view‚ out of possession.

“Because I knew that when we turned it over we would get something out of a situation like that.

“So it worked out. And things don’t always work out like that – that’s why I laughed.”

It was an evening of improbabilities all round.

A Chiefs team who have won twice in 15 DStv Premiership matches in a miserable domestic season are on the verge of being in the last four of Africa’s premier continental competition if they preserve their huge lead in Dar es Salaam on Saturday.

Amakhosi overwhelmed a Simba side who seemed somewhat overawed by their surroundings‚ or the occasion‚ but who had displayed their quality and ambition beating Pitso Mosimane’s Al Ahly in the group stage‚ where they topped Group A.

Chiefs’ earlier goals came from Erick Mathoho (sixth) and Samir Nurković (34th and 57th)‚ against a team who were also quarterfinalists in 2018-19.

Amakhosi‚ who had previously not reached the group stage of the Champions League‚ are now set to compete in the semifinals.

Hunt may have been chuckling at a game situation‚ but he could just as easily have been giggling at the improbability of it all.

The Premier Soccer League (PSL) has denied Swallows FC a potentially lucrative sponsorship deal with one of the major telecommunications companies.
Sport
1 year ago

Kaizer Chiefs get the chips against Simba FC

Domestically, Kaizer Chiefs have perhaps never been worse, and in the Caf Champions League they just seem to get better, demolishing Simba SC 4-0 in ...
Sport
1 year ago

Crunch time at both ends of the GladAfrica Championship

Sekhukhune United coach MacDonald Makhubedu has asked his charges to finish the season with a flourish.
Sport
1 year ago