Al Ahly and Pitso just too good for Sundowns 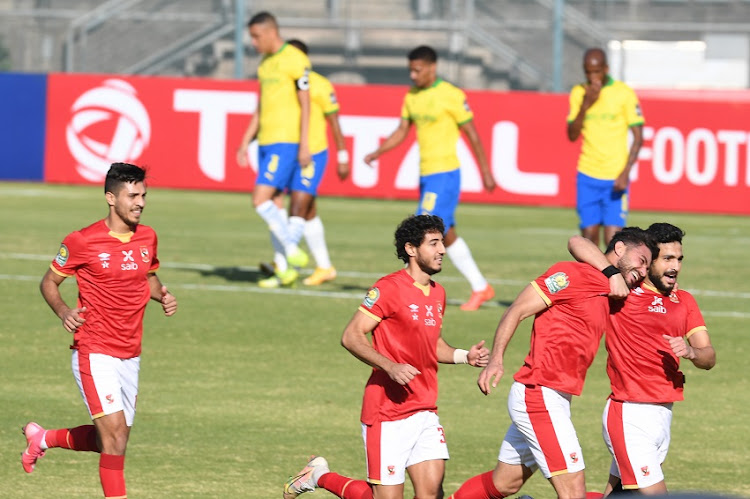 Pitso Mosimane returned as the prodigal son and usurped Shadrach‚ Meshach and Abednego in charge of an Al Ahly displaying stoicism of biblical proportions over the two legs of this Caf Champions League quarterfinal.

It says something when a coach can almost predict the way matches will go.

Yasser Ibrahim’s 11th-minute strike in Saturday’s second leg at Lucas Moripe Stadium was cancelled by Mosa Lebusa’s goal in the 30th. That led to a 1-1 scoreline that meant this replay of last season’s quarterfinal — where Mosimane was in charge of Downs — was an exact replica in scoreline.

Defending, and nine-time, champions Ahly progressed to yet another semifinal — 3-1 on aggregate, after winning 2-0 in Cairo. They were formidable in their discipline playing to winning — and not necessarily aesthetically pleasing, as is Sundowns’ custom — football in both legs.

Mosimane had not just out-thought his opposition coaching trio, and his Downs successors — Manqoba Mngqithi, Rulani Mokwena and Steve Komphela — over the two legs. In saying before the second leg he aimed to replicate Ahly’s tactics they employed against him last season, he had bordered on the realms of the prophetic.

It would be hard for them to pick a line-up, though, that could not be anticipated in this fascinating game of chess by an Ahly coach so familiar with Sundowns, and the Pretoria team’s coaches, and just an encyclopedia of continental football in general.

Mosimane’s 4-5-1, Rami Rabia patrolling behind two other big central midfielders in Amr El Solia and Aliou Dieng, had composure on the ball and snapped into a shape from the start that Downs would always seem challenged to put multiple goals past.

Ahly’s coach promised ahead of the game to replicate his team’s tactics they employed in the 2019-20 quarterfinal, on the way to winning the tournament — also under Mosimane from the semifinals. He said their approach coming to Lucas Moripe with another 2-0 lead would again be to give nothing away. Ahly are masters at that.

Perhaps what made an impression over the two legs, apart from Mosimane’s brain, has been the manner in which he appears to have adapted to the demands and strengths of Egyptian football, something so many foreign coaches struggle with coming to SA.

Ahly had no qualms playing the rope-a-dope over both legs to negotiate classy opponents. It is how great Egyptian teams play.

The Red Devils looked imposing in the opening 20 minutes and an early opening goal also was the last thing Sundowns, nervy at the start, would have wanted to concede as it meant they needed four goals to win the tie.

Ahly’s strike seemed to have Mosimane’s imprint on it. The coach stopped right-wing Mohamed Magdi Kafsha from taking an outswinger from a corner from the right, calling Ahly’s influential left-back Ayman Ashraf over for the inswinger.

A training ground set-piece goal from the big men followed. Midfielder Amr El Solia got up for the flick-on at the near-post to Ashraf’s bullet delivery, and centreback Yasser Ibrahim buried an emphatic header.

Ashraf’s cross-cum shot was tipped over by Denis Onyango in the 25th, before Downs got a toehold in the game.

A period of pressure saw Peter Shalulile’s shot blocked for a corner. That was taken short by Gaston Sirino to Maphosa Modiba, whose cross found Mosa Lebusa up to turn a header neatly past Mohamed El Shenawy.

Downs found confidence on the ball after the strike, as Ahly consolidated — 1-1 by the break though still left the Brazilians a highly unlikely target, needing to penetrate three more goals through Ahly’s steel.

After Modiba’s free-kick floated over the bar soon after the break, Downs’ coaches, seeking answers to an Ahly sitting back, introduced Mauricio Affonso and Khuliso Mudau in the 53rd. From a corner Affonso headed at El Shenawy with his first touch.

Kermit Erasmus and Gift Motupa followed coming on for Ricardo Nascimento and a limping Themba Zwane, who had been ineffective. But Sundowns had no more answers to give.

Kaizer Chiefs continued with their unbelievable journey in the Caf Champions League when they qualified for the semi-finals of Africa’s prestigious ...
Sport
1 year ago

The National Soccer League's (NSL's) executive committee (exco) that met on Thursday discussed the potential ramifications and implications of an ...
Sport
1 year ago

Bafana Bafana coach Hugo Broos has announced a mostly local-based 19-man squad with a youthful and adventurous flavour to it‚ apparently also ...
Sport
1 year ago