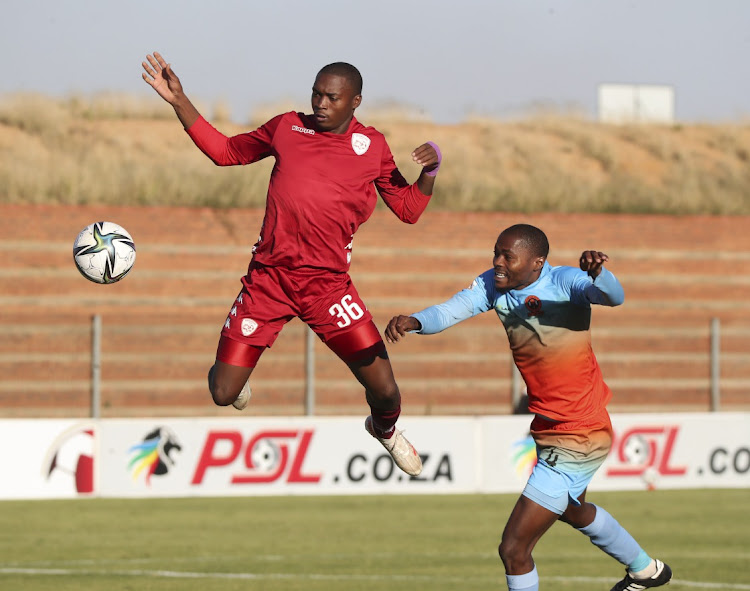 Thabang Sibanyoni of Sekhukhune United is challenged by Eden Nene of Polokwane City during the GladAfrica Championship match at Makhulong Stadium, Tembisa, on May 16 2021.
Image: Gavin/BarkerBackpagePix

Sekhukhune United have filed an urgent application at the Johannesburg high court for the arbitration award that saw them become the GladAfrica Championship champions to be deemed final and binding.

The GladAfrica (National First Division‚ or NFD) campaign ended last weekend, but the Premier Soccer League (PSL) is yet to crown the second tier champions as a result of an outstanding disciplinary decision over points awarded by an arbitration to Sekhukhune.

This saw the Tembisa team end higher than Durban side Royal AM on the final log. However‚ this log has not been updated by the PSL.

To muddy the waters‚ the PSL this week confirmed it would support Polokwane City’s application in the Johannesburg high court to review and set aside a SA Football Association (Safa) arbitration decision that awarded Sekhukhune three points.

“We decided to launch urgent papers on Thursday evening for the matter to be heard next Thursday (June 3)‚” Sekhukhune United’s instructing attorney Karabo Mathang-Tshabuse said on Friday.

The promotion debacle playing out in the lower tier took another twist on Monday after it emerged that Sekhukhune United is not the mysterious party ...
Sport
11 months ago

“We were supposed to be in court today following the institution of urgent action by Polokwane City. Polokwane City then moved to remove the matter off the roll to afford the league more time to draft papers, and we felt that move prejudices our client Sekhukhune United in terms of the National Soccer League (NSL) handbook and SA Football Association statutes.”

Mathang-Tshabuse said Sekhukhune’s representatives have argued that the decision of the Safa arbitrator needs to be implemented by the PSL until it is set aside.

“The arbitration award is final and binding until and unless it is set aside‚ so the league is not at liberty to join other parties while not implementing the award. Our urgent application is to compel the league to implement the award in line with the NSL handbook and Safa statutes.

“In terms of its own constitution and own rules‚ the PSL it is bound to implement. Seeing as the league has no intention to implement and this is causing a delay in the matter in terms of the championship announced to Sekhukhune United‚ we are of the view it is prejudice to our client.

"I never thought winning the league will be this painful," MaMkhize said.
TshisaLIVE
11 months ago

“The fact that you appeal a matter does not take away its effect. The fact of the matter here is that the outcome of the arbitration award is an outcome of a legitimate judicial process.

“The league as administrators of professional football cannot decide not to implement it. In terms of the rules‚ you implement and then you review and ask to set aside.”

An arbitrator ruled in favour of Sekhukhune on May 19 in a dispute involving Polokwane fielding ineligible players‚ awarding the Tembisa team three points in the week building up to the final round of NFD matches.

PSL acting CEO Mato Madlala could not be reached for comment.

PSL supports Polokwane court action as sees itself as 'co-applicant'

The Premier Soccer League (PSL) supports Polokwane City’s application in the Johannesburg high court to review and set aside a Safa arbitration ...
Sport
11 months ago

There was drama on the theatrical final day of the lower tier's season when Royal AM earned the point they needed to clinch automatic promotion on ...
Sport
11 months ago