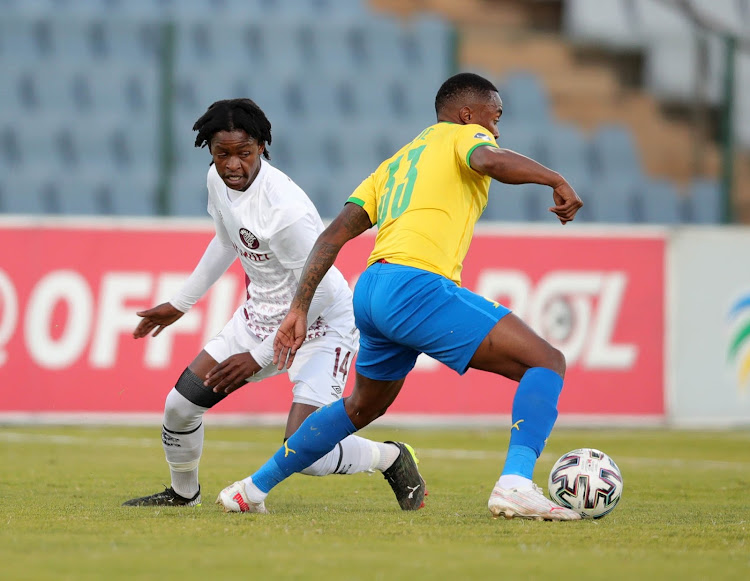 The two teams played to a 1-1 draw earlier in the season and the latest outcome was mainly due to Swallows‚ who kept their home unbeaten run intact‚ restricting the champions to just one shot on target for the entire 90 minutes.

Sundowns showed no sign of slowing despite collecting enough points (60) to bag their fourth successive league title and 11th overall in the Premier Soccer League era with their 3-1 victory over their neighbours SuperSport United on Wednesday.

Sundowns’ technical team made six changes to the XI that beat SuperSport‚ but the big one was in goals where the almost forgotten Reyaad Pieterse came in for injured Denis Onyango. Khuliso Mudau and Mothobi Mvala also got rare starts in a line-up that that also saw the return of red-hot striker Peter Shalulile.

Mamelodi Sundowns will not be taking their foot off the gas in their remaining three matches in the DStv Premiership campaign.
Sport
11 months ago

Swallows started the better of the two teams camping in the Sundowns half‚ but the team with the most draws in the league faded midway through the first half as Sundowns started to gain more possession.

In all honesty though‚ Sundowns lacked their usual sharpness and slick combinations going forward‚ perhaps the fact that they played this match knowing they’ve already won the title hampering their commitment. Only two shots were directed by Sundowns towards Sanele’s Tshabalala goals in the first half‚ but even those were not on target.

Not that the Birds were giving Pieterse anything to do‚ with only one shot out of four on target in a match that disappointed in the first 45 minutes.

Aubrey Modiba provided the first and only shot on target for Sundowns in the 53rd minute‚ but Tshabalala did well to tip the ball over the net for a corner as the champions showed a margin more urgency in trying to get a goal.

With Sibusiso Vilakazi replacing injured Themba Zwane early after the restart‚ the visitors started to attack with more purpose‚ but still Shalulile was not getting as many assists that would have helped him to add to his 11-goal tally.

Shalulile did get a pass from Vilakazi in the 72nd minute but the Namibian failed to keep the ball underneath his legs resulting in his hurried shot being way off Tshabalala’s goal.

Swallows left-back Sifiso Hlanti provided a delicious cross for substitute Kagiso Malinga to give the home side the lead with 15 minutes remaining‚ but the striker could only direct his header onto the crossbar in one of the rare opportunities that Brandon Truter’s team created in the second half.

With this draw‚ the Brazilians can now only finish on 67 points if they beat Bloemfontein Celtic on Wednesday and Cape Town City at home on Saturday‚ the day they will be handed their league crown.

Benni McCarthy: ‘The efforts of Pirates and everybody else are going to be in vain’

AmaZulu coach Benni McCarthy believes three points from their two remaining matches in their remarkable DStv Premiership campaign will be enough to ...
Sport
11 months ago

Egyptian giants Al Ahly extended their dominance of the African game with another trophy success as they beat Renaissance Berkane of Morocco 2-0 to ...
Sport
11 months ago