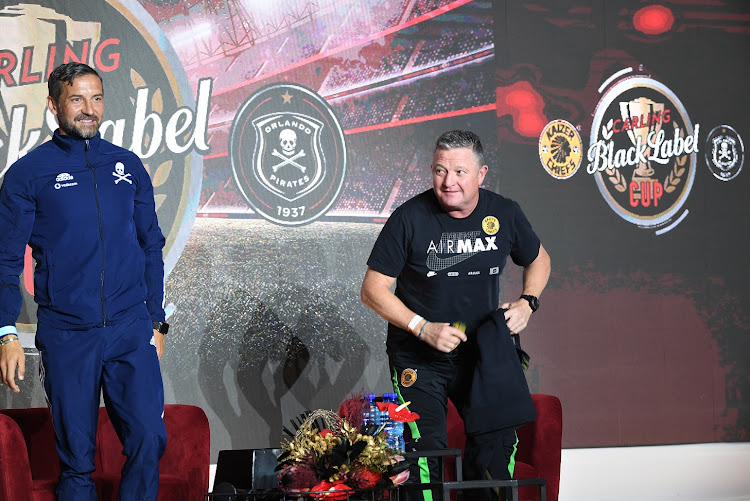 Orlando Pirates coach Josef Zinnbauer and Gavin Hunt, then coach of Kaizer Chiefs, but who has since been fired, during the 2021 Carling Black Label Cup Launch in Johannesburg on Tuesday, May 25, 2021.
Image: Lefty Shivambu/Gallo Images

The print on the news stories of Hunt being “released from his contract” by Chiefs on Friday is barely dry, and speculation has swirled across social media that the four-time league winner may be on the way to Amakhosi’s bitter rivals Pirates.

Mbele said on Saturday that Pirates have a standing coach in Josef Zinnbauer, and dismissed speculation Hunt might join the Buccaneers.

“The trouble is, I’m hearing this for the first time. I don’t know anything about that,” Mbele said.

“I don’t pay too much credence to social media. Half the people there don’t know what they are talking about, that’s one.

“Two is that something you must always have at the back of your mind is that it’s not often that a Pirates coach is announced by anybody except the club.

“That is why I’m saying that once you start putting names, then you must know it’s not true. Our coaches are never leaked.

The postmortems of the success or lack of it for Zinnbauer’s first full season may depend on Bucs, in fourth place in the DStv Premiership, finishing second to clinch a Caf Champions League spot, or at least third to re-enter the Confederation Cup.

Pirates’ football on form under Zinnbauer in 2020-21 saw them go on long winning runs, but when the team blew cold they could barely win a game. A side that was expected to push Mamelodi Sundowns — crowned fourth-time champions this week — for the title, are instead scrambling for a runners-up spot with three games to play.

Mbele said Bucs can only make appraisals of the season once all the club’s departments’ technical reports are in at the end of the campaign. He did admit, though, that second position in the league could make for a conclusion drawn of a decent 2020-21 season.

“It’s premature to be able to reflect on the season in total,” he said. “Because you have to take everything into account, including injuries to key players, the size of the squad in relation to our participation in Caf.

“Because it’s not just the coach who must account on the field — there are also other components within the club that must also be able to give reports.

“Because let me put it this way: assuming we played the next three games and don’t make the top two, then you will sit subconsciously and say, ‘Look, we’ve underachieved.’

“You win the next the games, you finish second, and you think, ‘We won the MTN8, we are second and back in the Champions League, came out in the quarterfinals of Caf Confed — maybe the season is not all bad as all that.’”

Pirates lost 5-1 on aggregate to Raja Casablanca in this season’s Confed quarters, including Sunday’s 4-0 second-leg defeat in Morocco.

Bucs meet TS Galaxy at Mbombela Stadium on Sunday in their third-last league game, Baroka FC in Polokwane on Wednesday, and Tshakhuma Tsha Madzivhandila at Orlando Stadium on Saturday.

Zinnbauer: Pirates ‘coming closer now to the good places that we want’

Josef Zinnbauer hailed a big win against AmaZulu on Thursday night as bringing his team closer to the “places we want” in the DStv Premiership.
Sport
7 months ago

Orlando Pirates brought themselves back into the equation for second place in the DStv Premiership, gritting out a 1-0 win at Orlando Stadium on ...
Sport
7 months ago