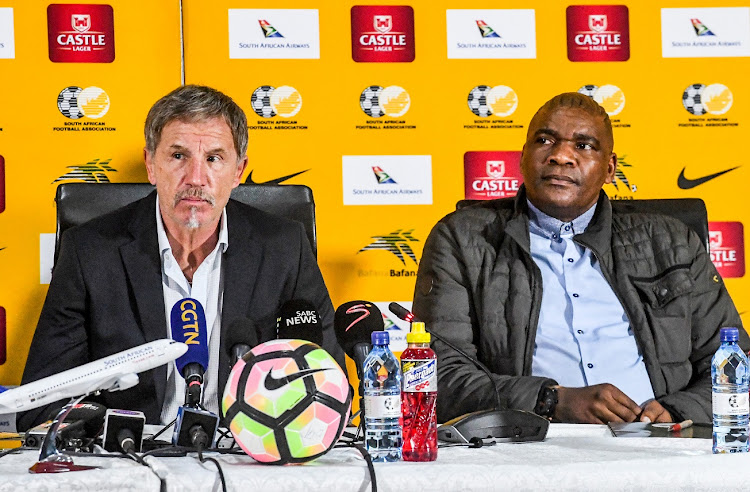 Stuart Baxter and Molefi Ntseki when the former was head coach of Bafana Bafana, and the latter his assistant. Baxter has been tipped to become the new coach of Kaizer Chiefs in the coming days, with Ntseki again his assistant.
Image: Sydney Seshibedi/Gallo Images

On Friday evening, Chiefs announced on their official Twitter account that Hunt was “released from his contract” at the battling, 11th-placed Soweto giants, with two matches left to play in the DStv Premiership.

Insiders have told TimesLIVE talks were already at an advanced stage for Baxter, an Englishman of Scottish heritage who has twice coached Bafana, to return to Naturena. They said he had asked that the club secure Ntseki as his assistant.

Baxter and Ntseki are expected to be appointed long before Chiefs play against Morocco’s Wydad Casablanca in the semifinals of the Caf Champions League next month. The two legs will be played on June 18 or 19, and June 25 or 26.

Ntseki was Baxter’s assistant in the well-travelled coach’s second stint as Bafana head coach from 2017 to 2019. He then succeeded Baxter to coach the national team until his dismissal on March 31 this year.

The two apparently had a good working relationship at the national team and Baxter respects Ntseki’s abilities as an assistant coach and scout and his work with youth structures.

“Baxter worked closely with Ntseki at Bafana, and he [Baxter] rates him very highly. There have been exploratory discussions, and if Baxter signs on the dotted line with Chiefs, then Molefi is more than likely to be his assistant coach at Naturena,” said a source close to the developments.

Ntseki was sacked as Bafana coach after the senior national team failed to qualify for the Africa Cup of Nations (Afcon) in Cameroon next year.

TimesLIVE contacted Kaizer Chiefs on Friday afternoon for a response. On Saturday morning, Chiefs’ marketing director, Jessica Motaung, said via WhatsApp: “As you know, yesterday [on Friday] the club made an announcement regarding Gavin Hunt. As per the press release, future announcements will be made in due course.”

Baxter’s intermediary in SA, Steve Kapeluschnik, could not be reached on his cellphone and attempts to obtain Baxter’s most recent contact details from those close to him in SA also failed as they said he did not give those out.

Chiefs have announced that assistant coaches Arthur Zwane and Dillon Sheppard will take charge of the team in the remaining two league matches – against Golden Arrows at FNB Stadium on Wednesday and against TS Galaxy at Mbombela Stadium on Saturday.

It would not be the first time that Chiefs have tried to lure Baxter back to the club he quit in 2015 after leading them to a second league and cup double in the space of three seasons.

Baxter confirmed in August 2018 – when he was Bafana coach – that Chiefs had made contact with him over returning to Naturena as Amakhosi’s head coach. He said of the reports that Chiefs had courted him to return: “Yes‚ I’m sure there was life in it.”

He did not deny that he had been in contact with the club‚ saying only that any such communication had not been as “drawn out” as it appeared in the media.

Baxter was mired in controversy at the start of the year after he was fired from Indian Super League (ISL) club Odisha FC after a bizarre and ill-advised “rape” comment he made in a press conference.

He had joined Odisha in June last year, having been out of a job since quitting his stint as SA’s national coach on August 2 2019‚ weeks after Bafana reached the quarterfinals of the 2019 Afcon in Egypt.

Last-placed Black Leopards clawed a vital three points in their relegation battle that could provide them a DStv Premiership lifeline, their 2-1 win ...
Sport
2 months ago

Former Kaizer Chiefs star Pollen Ndlanya believes the club’s situation - mathematically it's not clear of the relegation playoffs with two games to ...
Sport
2 months ago