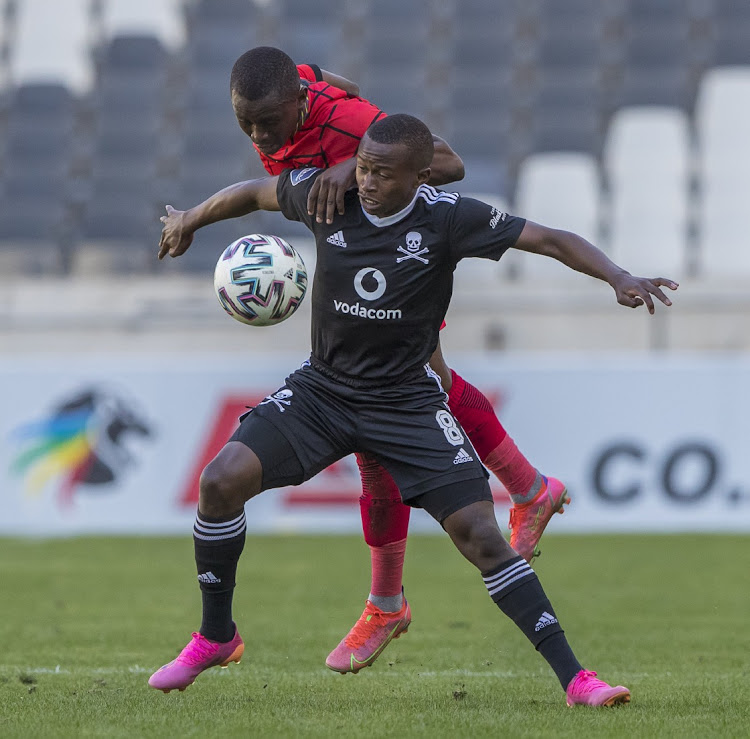 Siphesihle Ndlovu of Orlando Pirates during the DStv Premiership match against TS Galaxy at Mbombela Stadium on May 30 2021.
Image: Dirk Kotze/BackpagePix

Orlando Pirates' push for a second-place finish and a spot in next year’s Caf Champions League suffered a major blow after the stuttering Buccaneers were beaten by TS Galaxy in Nelspruit on Sunday.

Pirates were caught cold as early as the third minute when Galaxy midfielder Masilakhe Phohlongo was allowed space inside the box to score with a header to give the visitors a lead they never relinquished at the Mbombela Stadium.

The 1-0 defeat‚ a seventh loss in the DStv Premiership for Pirates to go with 12 wins and 10 draws‚ saw the visitors remain stuck in fourth place on 46 points.

With two matches remaining this season‚ the Bucs are level on points with third-placed Lamontville Golden Arrows but trail second-placed AmaZulu by four points.

Pirates will now hope AmaZulu lose one of their remaining two matches‚ against Swallows FC and Maritzburg United‚ and win their own against Baroka FC and Tshakuma FC if they are to finish second and book themselves a place in next year’s Caf Champions League.

A third-place finish will be some consolation for the Buccaneers as it qualifies them for the Caf Confederation Cup but that too is not in their own hands as Arrows have to stumble against Kaizer Chiefs and Stellenbosch FC for that to happen.

Having conceded an early goal that put them on the back foot‚ things got worse for Pirates as utility midfielder Abel Mabaso saw red after two yellow cards in quick succession‚ but the playing numbers were level again on the stroke of half time when Galaxy captain Spiwe Msimango was also sent off following a second bookable offence.

The Galaxy win‚ which the team celebrated wildly after the final whistle‚ is precious as it consolidates their spot in eighth place on 35 points.

Four out of a possible six points in their remaining two matches against Stellenbosch on Wednesday‚ and against Chiefs on the final day on Saturday June 5‚ would seal a place in next year’s lucrative MTN8 Cup.

Despite having won the R8m MTN8 early this season‚ coach Josef Zinnbauer remains under massive pressure from the hard-to-please Ghost‚ as the Pirates fans are known‚ and the German coach knows that failure to qualify for next year’s Caf competitions may result in his sacking after their league encounter against Tshakuma on Saturday.

Zinnbauer cut a frustrated figure in his post-match interview and said his team was not worthy of a win.

“You know all the opponents are motivated when they play against us and if you are not in the game then you have no chance‚ but in all, the performance today was not enough to get the three points‚” said Zinnbauer.

Galaxy coach Owen da Gama praised his team and promised that there will be more to come.

“We have worked very hard for this win‚” said Da Gama.

“Pirates is a quality side and for us to get this win shows that we are in the right direction.”

Sekhukhune United have filed an urgent application at the Johannesburg high court for the arbitration award that saw them become the GladAfrica ...
Sport
7 months ago