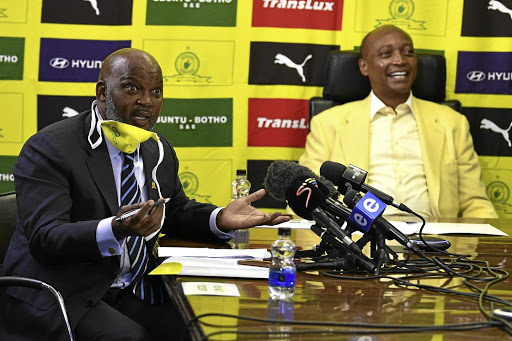 Hostilities between Pitso Mosimane and his former club Mamelodi Sundowns continued unabated after his representatives revealed on Monday that they received summons from the Chloorkop-based side demanding to be paid back commission fees related to the coach.

Mosimane left Sundowns in September last year just months after extending his contract and proceeded to join Egyptian powerhouses Al Ahly in a move that stunned the nation's soccer lovers.

The decision apparently did not go down very well at Chloorkop and the tension between the two parties has been brewing for months.

The revered coach's representatives, MT Sports Marketing and Management, said they were stunned after receiving the summons from the recently crowned DStv Premiership champions.

“It is with a deep measure of shock and disappointment that MT Sports Marketing and Management has received summons from Mamelodi Sundowns F.C demanding to be paid back commission fees in lieu of coach Pitso Mosimane‚” the management company said.

“We have received communication from Mamelodi Sundowns and have attempted to reach an amicable solution to this matter‚ however they have not responded to our request to meet with us.

“We attempted to speak to then club president Dr Patrice Motsepe in January this year‚ and we were refused‚ and also last week with chairman Tlhopane Motsepe‚ we were met with silence.”

The hostilities have been simmering for months and matters came to a head when a section of the Pretoria club’s supporters hurled insults at Mosimane and his mother as he was travelling in the Al Ahly team bus on the way to Lucas Moripe Stadium to face Sundowns in a tense Caf Champions League second leg quarterfinal match last week.

The incensed supporters clad in the Brazilians' colours tried to block the visitors’ route outside the venue and hurled insults at their former coach and his family‚ and also brandished placards with similar profanities.

Sundowns apologised to Al Ahly a few days later‚ but not to Mosimane‚ and the coach was not impressed by the glaring omission.

Then the coach's salary‚ reportedly R1.5m a month‚ was revealed in a Sunday World report at the weekend and Mosimane's representatives believe that the information was deliberately leaked as part of a dirty tricks campaign against the coach.

The report also said the club was demanding that Mosimane and his wife Moira Tlhagale‚ who is his representative‚ must pay back almost R8m of the agent's commission that was awarded to her when he extended his contract on June 1 last year.

“The leaking of the story to the media is impolite and smacks of bullying tactics‚” said Mosimane's representatives after the information was made public.

“This also comes after last week’s events, where sections of Sundowns fans hurled insults to coach Pitso and his mother.

“The summons and the media leaks put into disrepute Dr Motsepe’s blessings on the termination of the contracts‚ and well-wishes on coach Pitso joining Al Ahly S.C last year.

“In his own words‚ Dr Motsepe said, 'I have on several occasions‚ over the past few years‚ expressed my support for Pitso Mosimane leaving Sundowns to coach in North Africa or Europe or Bafana Bafana.

“I have received a warm and emotional note from Pitso and am very proud of his achievements at Mamelodi Sundowns.

“Pitso has been the most successful coach in the history of Sundowns and will always be a member of the Mamelodi Sundowns family'.”

Mosimane told the media last week that he would write a book about the treatment he has received from Sundowns since his departure last year.

His representatives said he just wants to be left alone to continue his work in Egypt without the continuing interference from the Pretoria side.

“He has been well-received by Al Ahly and the entire Egyptian nation. His only desire is to focus on his job and continue to deliver on his mandate.

“There are also social media posts making the rounds that Ms Tlhagale alleges that Dr Patrice Motsepe has used one of the team’s employees in match fixing.

“We would like to categorically state that Ms Tlhagale has never said such things about Dr Motsepe or anyone associated with the club.

“There are unknown forces that are attempting to put MT Sports Marketing and Management’s name into disrepute.

“We‚ as MT Sports and coach Pitso‚ are grateful to Mamelodi Sundowns for the years he spent there and would not like this glorious legacy to be soiled by tussles that could easily and rapidly be handled professionally and privately.

“We hope sanity will prevail and that this will be resolved amicably. However‚ if this is not possible we will be happy to meet Mamelodi Sundowns in court.

“We will not be conducting any media interviews for the time being and we urge people to cease sending malicious messages about Ms Tlhagale‚ coach Pitso and MT Sports Marketing and Management.”

Transport minister Fikile Mbalula believes Gavin Hunt is a good coach, despite him being sacked by Amakhosi.
Sport
7 months ago

Manchester City forward Raheem Sterling and defender Kyle Walker have been racially abused on Instagram following the team's 1-0 defeat by Chelsea in ...
Sport
7 months ago

Guardiola a true believer in 'false nine' ahead of final

It is a term that once puzzled pundits and upset traditionalists but Manchester City manager Pep Guardiola says the 'false nine' brings out the best ...
Sport
7 months ago

Mamelodi Sundowns will not be taking their foot off the gas in their remaining three matches in the DStv Premiership campaign.
Sport
7 months ago

Orlando Pirates are also at the mercy of Arrows who still have to play against Kaizer Chiefs and Stellenbosch FC.
Sport
7 months ago