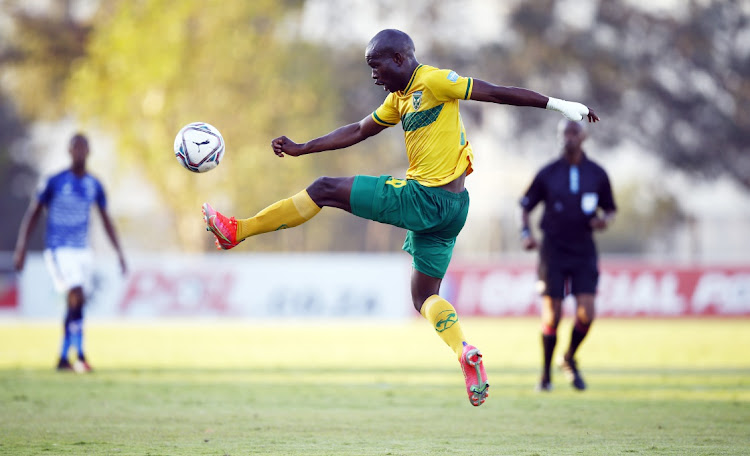 Nkosinathi Sibisi of Golden Arrows during the DStv Premiership 2020/21 game between Maritzburg United and Golden Arrows at Harry Gwala Stadium on 12 May 2021 © Steve Haag/BackpagePix
Image: BackpagePix

Lamontville Golden Arrows coach Mandla Ncikazi has voiced his unhappiness with the omission of his player Nkosinathi Sibisi from the list of nominees for the defender of the season award.

The list of nominees in several categories were announced a few days ago and Ncikazi - himself a nominee in the coach of the season category - believes that Sibisi should have got a nod. AmaZulu defender Tapelo Xoki, Mosa Lebusa of Sundowns and Njabulo Ngcobo of Swallows FC were chosen ahead of Sibisi.

“If there’s an injustice that took place [during the nomination process] it is the fact that Sibisi was left out,” Ncikazi told TimesLIVE.

“If you leave out Sibisi in the nomination [list] for the defender of the season, I just think it’s a big injustice. I just don’t believe there’s a defender currently, in terms of performance, who is doing better than Sibisi.”

Arrows have had a remarkable campaign with Ncikazi in his first full season at the helm as head coach of a club in the Dstv Premiership and they lost only four matches during the campaign to stay third on the standings with 46 points, and just four behind second-placed AmaZulu.

Abafana Besithende’s efforts in the league have seen them fighting for second-place with neighbours AmaZulu and Orlando Pirates after champions Mamelodi Sundowns wrapped up the title last week.

While Ncikazi was happy to be nominated with the championship-winning Sundowns coaching duo of Manqoba Mngqithi and Rulani Mokwena, and AmaZulu's Benni McCarthy in the coach of the season category, he bemoaned 25-year-old Sibisi's absence from the list.

The diminutive centre-back captained Arrows in most of their games this season and was recently rewarded with a maiden call-up to Bafana Bafana when new coach Hugo Broos named the team to play Uganda in a friendly  international at Orlando Stadium on June 10.

“For me, I will say this with the humblest of respect, I don’t know how the nomination for defender of the season was done," he said.

“For a player who has played as consistently as Sibisi has played, unless if he’s suspended or injured, he’s been an integral part [at Arrows]. If he was playing for other teams, I’m sure he would have made the list.

“If you compare him with others, somebody still has to convince me. With respects to the others, but compare him to the defenders that are there, I really don’t think it takes him out.

“And he’s not been a robust player if you’re talking dangerous play. But it’s their choice and if it didn’t happen now, I hope it will happen in the future.”

Ncikazi was, however, happy to see the club’s 24-year-old goalkeeper Sifiso Mlungwana getting the nod from the judges in the goalkeeper of the season category alongside Sundowns’ Denis Onyango and Veli Mothwa of AmaZulu.

“People don’t highlight it [but Mlungwana is the only goalkeeper in the Premiership who’s played all the games [28 matches in the league this season] for the club. There’s no other goalkeeper who has done that in the league.

“Mlungwana has played 43 games without a yellow card, including last season. He doesn’t have a single card. In terms of clean sheets, I think he’s number two behind [Denis] Onyango [14].

“For a goalkeeper at his age (23), I don’t know how many records he’s already broken at Arrows to be in that level.

“For me, Mlungwana really deserves to be in the national team (Bafana Bafana) in my view, unless if the reason of him not being there is because of the SA Under-23 side [going to the Olympic Games].

“In terms of his performance I believe that he deserves [a chance at Bafana].”

Gavin Hunt’s statistics as coach of Kaizer Chiefs will make for some sorry reading when his tenure is analysed and reminisced on in future.
Sport
2 weeks ago

Do you think he will be a success as head of the technical and youth academy at Amakhosi?
Sport
3 weeks ago

Hostilities between Pitso Mosimane and his former club Mamelodi Sundowns continued unabated after his representatives revealed on Monday that they ...
Sport
3 weeks ago

Former Bafana Bafana coach Molefi Ntseki has joined Kaizer Chiefs as the club’s head of technical and the youth development academy in a three-year ...
Sport
3 weeks ago