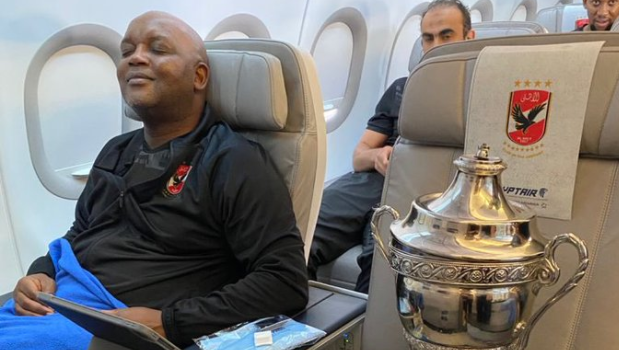 Pitso Mosimane had the streets in stitches this week after he posted a next level flex of himself with his latest trophy.

It was a record-extending seventh Super Cup success for Al Ahly, who are the most successful team on the continent with nine African Champions League titles.

The coach was hailed by many, including SA president Cyril Ramaphosa, for the victory and took to social media on Wednesday to flex a little.

“After action, comes satisfaction,” he captioned a snap of him next to the trophy, with his eyes closed and a smile on his face.

As expected, the post drew thousands of reactions, with some saying he was throwing serious shade at his rivals.

Others said he shouldn't rest, but focus on the next trophy.

One hilarious user pleaded with him to come back to SA to “coach King Monada” in his upcoming boxing match against Big Zulu.

That run,I thought he was gonna pull The Edge sphere move pic.twitter.com/lu6qSJ5dBl

It will end in tears, i tell u pic.twitter.com/jNGOmeYu7V

Super cup,that was a long time ago!!
Time to work hard for new challenges ..
The word"enough" doesnt exist here..

Think now those former players and coaches, who disrespected you saying Al Ahly can be coached by anyone and win have their tails behind their legs.

We are witnessing the rise and rise of a legend here👌🏽👌🏽

Ramaphosa: ‘Pitso is an outstanding flag-bearer for our country and for football’

The gloves are off in the Mosimane v Sundowns feud