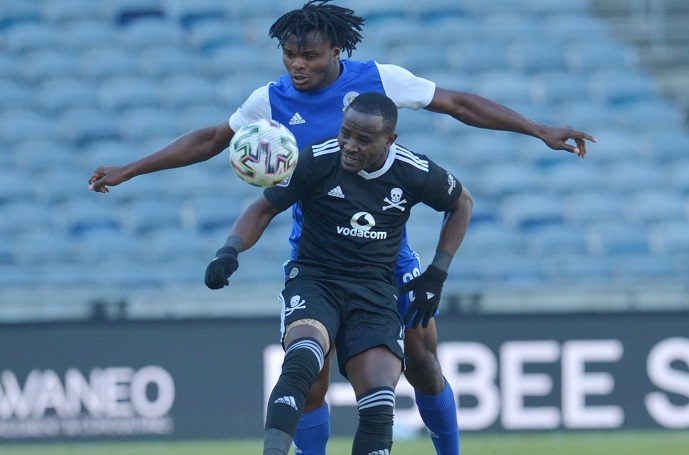 Orlando Pirates and Tshakhuma Tsha Madzivhandila (TTM) will represent SA in the Caf Confederation Cup next season after the two teams finished the 2020-21 campaign with a dull 0-0 draw at the Orlando Stadium in Soweto on Saturday.

Pirates needed a point to ensure they ended the DStv Premiership season third, while TTM  played this match already knowing they were safe from relegation after securing enough points with another 0-0 draw against Chippa United on Wednesday.

TTM, qualifiers for the Confed by virtue of being the Nedbank Cup winners, finished in the 12th spot in the PSL after Saturday’s results.

While there was nothing to enthuse about in this game, these teams have at least one something to smile about this season as they won the two cup competitions, Pirates bagging the MTN8.

Pirates will go to the Confed, a competition in which they were knocked out by Moroccan giants Raja Casablanca in the quarterfinals last month, for a second season running after failing in the last two campaigns to either win the league title or finish second to reach the Champions League.

A lot was expected from Bucs coach Josef Zinnbauer and his team this season and the third-placed finish will be small consolation for the club’s expectant supporters, who believed their team would challenge strongly for the league title.

Zinnbauer’s future with the Buccaneers cannot be guaranteed as the team failed to have consistency in their league results.

The German coach joined Bucs in December 2019 and after new acquisitions that included Bafana Bafana skipper Thulani Hlatshwayo, Deon Hotto and Terrence Dzvukamanja from Bidvest Wits at the beginning of 2020-21, Pirates were seen as a team with a greater chance to challenge Mamelodi Sundowns for the league title.

Drastic changes in the squad will not help the Buccaneers in the coming season as the current players, although failing to eke out important results, hardly seemed to know each other that well. A tweak or two might be what Pirates will need instead of the wholesome changes that are usually made by the club hierarchy when things don’t go their way.

There was little to report on Saturday’s match where referee Thokozani Mkhize denied Pirates what seemed a clear a penalty just two minutes into the game when Vincent Pule was hacked down by TTM’s defender Tebogo Thangwane inside the area after Thembinkosi Lorch had supplied a great pass for Pirates’ left-footed winger.

TTM gave Bucs little room to manoeuvre in the middle of the park where they had five players and just only one man – Thembisani Nevhulamba – up-front. The visitors also had their goalkeeper Washington Arubi to thank for kwwping them in the game with a few brave saves, especially in the second half.

Given the season they have enjoyed under Mandla Ncikazi, fourth place in the 2020-21 DStv Premiership might come as a disappointment to Lamontville ...
Sport
7 months ago

The desperate scrap for the Premiership runner-up spot was decided in the penultimate round of the season after AmaZulu beat Swallows FC 1-0 to claim ...
Sport
7 months ago

Benni having the last laugh as he steers AmaZulu into Africa

Benni McCarthy has confounded his critics, guiding Usuthu to second spot and a place in the Caf Champions League
Sport
7 months ago