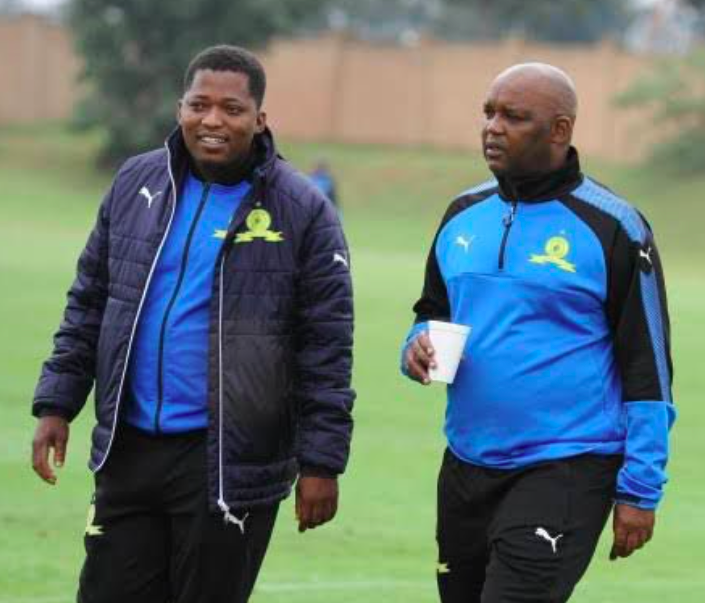 The former Mamelodi Sundowns spokesperson died on Sunday in a car accident.

The accident took place between Marlboro and Grayston drives in Sandton.

It is believed Thuswa, who was driving a Mercedes-Benz, lost control of the car before it collided with barricades and crashed down an embankment.

His family released a statement on social media in which they expressed their sadness and asked for privacy as they mourn his death.

“We know many people were touched by the kind of person Thulani was and have expressed their hurt and shock. We respectfully ask for time as a family to privately mourn our beloved Thulani.”

Devastated by Thuswa’s death, Mosimane said he was lost for words.

“Rest in peace my brother. I am found lost for words. Gone too soon,” he wrote on Twitter.

Rest In Peace my brother🕊
I am found lost for words. Gone too soon💔 pic.twitter.com/ptZ8DJ2gmq

The two men were close, sharing many special moments at Sundowns before Thuswa left to start his own public relations‚ sponsorship and talent management agency, Tyler Masons Management, in 2019.

“We pray the Almighty God comforts and strengthens his family, friends, everyone associated with his company Tyler Masons and the country at large. May his soul rest in peace,” said the club.

"You played your part and left a mark."

We pray that the Almighty God comforts and strengthens his family, friends, everyone associated with his company Tyler Masons and the country at large.

May His Soul Rest in Peace.

Damn, the passing of Thulani Thuswa cuts extremely deep, he was such a genuinely good dude. I’m personally hurt by this. May his soul rest in eternal peace #RIPThulani pic.twitter.com/ZV2mefDF5g

Our deepest condolences to the families, friends and football fraternity for the tragic loss of former Mamelodi Sundowns communication manager Thulani Thuswa.

Our thoughts and prayers are with the Thuswa family. May his soul rest in peace 🕊 pic.twitter.com/r27Oi5eEx2

It was with great sadness that we learnt of Thulani Thuswa’s tragic passing yesterday morning. Thulani was a colleague in the business of football for a number of years. He will be remembered for his smile and love for the game.#RIPThulani pic.twitter.com/KLDrIpmaSS

One in a million! #RIPThulani

I love you @ThulaniThuswa 💔
“Monna, we are sleeping on our potential”, your last words to me on June 3, 2021
Thank you. 😭 pic.twitter.com/woY5T7gJcH

The club is saddened to hear of the passing of former Mamelodi Sundowns Communications Manager, Thulani Thuswa.

This hurts 💔.. rest easy champ. Such a beautiful human being. Grateful to have known you brother @ThulaniThuswa 🙏🏽

Trampling on women, burning and looting. What a mess!

Former Mamelodi Sundowns striker Toni Silva‚ sold to Al-Ittihad in Egypt this month after an unsuccessful half-season at the Brazilians‚ has launched ...
Sport
2 years ago