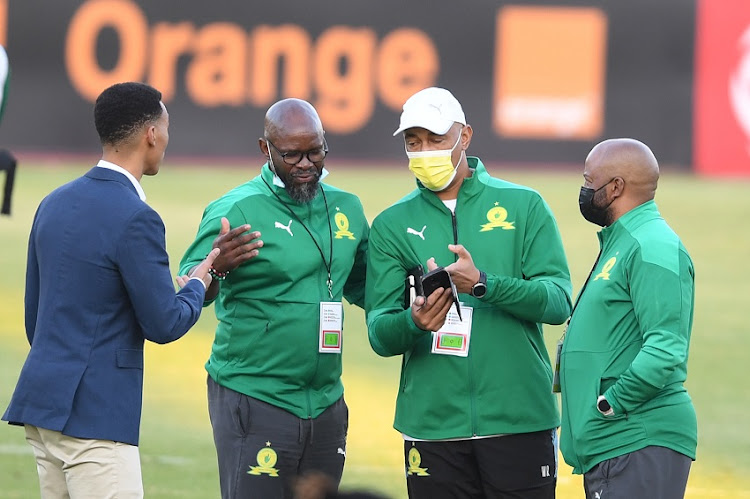 Mamelodi Sundowns co-coach Manqoba Mngqithi has questioned if his technical team could have done more to have won the DStv Premiership Coach of the Season award at Sunday's Premier Soccer League (PSL) Awards.

Sundowns won a fourth-straight title‚ and in the end by a mile and a 13-point gap over second-placed AmaZulu.

It was Usuthu's coach‚ Benni McCarthy‚ who won Coach of the Season‚ the judges taking into account the fewer resources Bafana's all-time top-scorer had at the Durban sleeping giant‚ and a turnaround from the bottom half when he arrived at the club.

AmaZulu's second place was their best finish by far in the PSL era‚ their previous-highest being seventh.

In 1972 they won their only championship title in the old National Professional Soccer League (NPSL).

Mngqithi was asked his opinion on the furore that has engulfed McCarthy being chosen over Sundowns' joint entry of himself and Rulani Mokwena.

“I don't think I'm the right person to talk about that. I think maybe the adjudicators will share a better light‚” Mngqithi said.

“The question is: When in the season did we not do well not to qualify for those Coach of the Month awards?

“We dominated from the beginning of the season until the end‚ but we only got the Coach of the Month award in the May/June awards.

“Maybe there was something we did not do right‚ which we should hear from the adjudicators. what exactly would influence us in improving our standing next season?

“We want to improve. We also believe we have a chance to win it if we can know what is expected of us.

“To win the league with 13 points away from No.2‚ to lose one game and not lose even one match away from home‚ and only concede 14 goals for the season‚ which shows the defence was very good, score more than 45 goals‚ which suggests your scoring ratio is also very good.

“For me the bigger fish was to win the trophy‚ and I am very happy Sundowns won the premiership and I would not complain.”

Mngqithi said he was impressed with the job McCarthy has done since arriving in December with AmaZulu in the bottom half and taking them to title contenders.

“I am also happy with the work that Benni did at AmaZulu. I believe he did a lot of good work‚” he said.

“He transformed them from a relegation-threatened team into a team that now is playing in the Champions League. You can never take that for granted.

“I even said I think there should have been an award from the PSL to say‚ 'Hey‚ this is the most-improved team of the season'.

“The improvement is remarkable when you consider where they were last season and where they are now.

“As for these awards‚ the adjudicators maybe know better.”

Sundowns ended with 67 points from 19 wins‚ 10 draws and a single defeat‚ scoring 49 goals and conceding 14.

The Peter Shalulile fairytale continued after the Mamelodi Sundowns striker was named Footballer of the Season and DStv Premiership Player’s Player ...
Sport
1 year ago

McCarthy was voted the coach of the season after steering Usuthu to second place in the DStv Premiership, their highest ever finish in the league.
Sport
1 year ago

Recently crowned Mamelodi Sundowns coach Manqoba Mngqithi says he was never bothered by the doubting Thomases who questioned his appointment when he ...
Sport
1 year ago