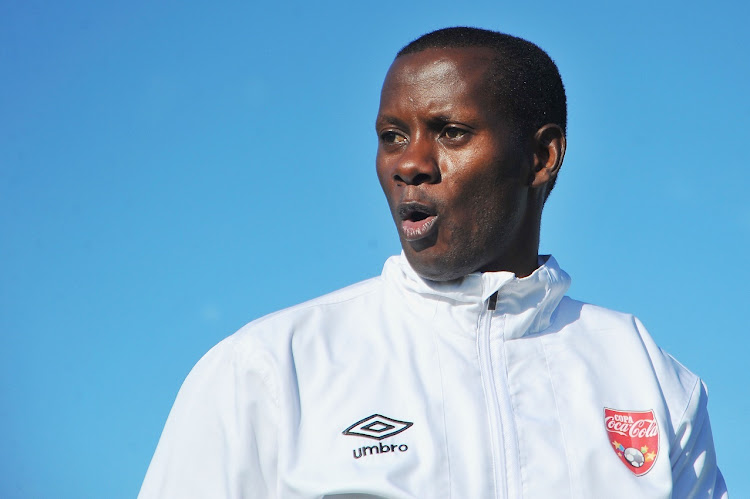 Helman Mkhalele believes the Achilles heel that is holding back many South African players from reaching their potential is their lack of a battle-hardened mentality.

Mkhalele, the Newcastle-born former Orlando Pirates winger whose tearaway speed would leave defenders in his wake, was chosen by Broos after he impressed the Belgian with his knowledge of the local game and players.

“I am excited for the challenge and to be part of the technical team that is there to work hard to ensure that we improve the quality, especially of results, as well as the quality on the field,” said Mkhalele, a 1996 Africa Cup of Nations winner with Bafana.

“But more importantly, it is that we have the right players. We will be working very hard to ensure that the mentality of the players reaches the required levels so that when they go out there they represent the country with great pride and interest.”

New Bafana Bafana assistant coach Helman Mkhalele has identified many of the pitfalls that have led to the decline of the national team over the ...
Sport
4 months ago

Mkhalele was part of a courageous Pirates squad that won the 1994 Premiership title and the 1995 Caf Champions Cup, a key confidence-booster in Bafana’s Nations Cup victory on home soil the following year.

He knows what he is talking about when he says the mentality of South African players needs to improve.

“For me, having been part of the national team as a player and also as part of the [current] technical team, from Under-20, I have an understanding of the mentality of our players,” Mkhalele said.

“I have an understanding of their culture and also understand their technical abilities individually.

“This is the information I shared with the coaches [Broos and Janevski], and more especially on the mentality aspect, because it is one aspect that we have been trying to work on at our junior national teams.”

Mkhalele said the country is blessed with an abundance of young rough diamonds who just need to be refined and polished to be a finished product.

“The talent is there but the mentality also needs to be paid attention to, so that we find a balance of both the technical abilities.

“And once we combine that and all those elements, then I believe that will help us as a nation.”

Having failed to qualify for next year’s Nations Cup in Cameroon, which led to the dismissal of coach Molefi Ntseki and the appointment of Broos, the immediate target for the Belgian head coach is to qualify the team for the 2022 Fifa World Cup and the 2023 Afcon.

“We are still going to have challenges to overcome but for me sharing this information with them will give them a broader picture of how to address those challenges,” Mkhalele said.

“In our culture as well, because we know that they come from Europe and they also have certain ways of how to address those issues, but having someone like myself sharing all those elements that I have just mentioned will become easier to address the situation in a more African way and blend it with their expertise.

“So far we have been working quite well. Yes, differences will be there and questions will be asked, but at the end of the day we need an amicable solution to fix our problems.”

Cedomir Janevski‚ Bafana Bafana’s new assistant coach to head coach Hugo Broos‚ has admitted that the first camp of the new era is off to a rocky ...
Sport
4 months ago

Bafana Bafana first assistant coach Čedomir Janevski has warned that Uganda are a dangerous counter-attacking team that can also hurt their opponents ...
Sport
4 months ago