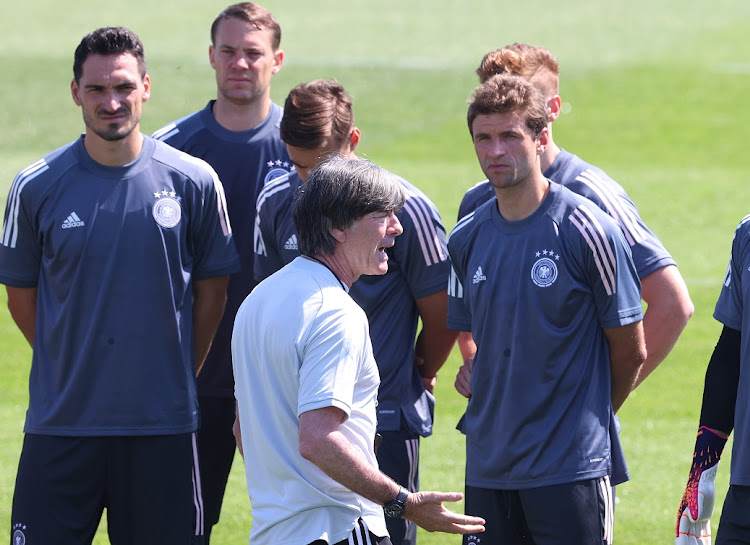 Joachim Loew, head coach of Germany, speaks to his players during their training session at Adi-Dassler-Stadium in Munich on June 18, 2021, ahead of the Uefa Euro 2020 Group F match against Portugal.
Image: Alexander Hassenstein/Getty Images

Germany will be far more attack-minded in their Euro 2020 Group F game against Portugal on Saturday after their opening defeat to France left them in need of points, coach Joachim Loew said on Friday.

The three-time European champions, desperate to make amends for their shock 2018 World Cup first round exit, were largely toothless against the French.

When in France’s half, they struggled to get the ball into the box and had only one effort on target, playing without an out-and-out striker and with Serge Gnabry in the forward role.

“Tactically we have to bring something else, more attacking power. We need to bring in more intensity,” Loew told a news conference.

“When we are in the last third of the pitch we have to stay there. Against France, there were situations where we played the ball back out and our opponents have enough men against the ball again.

“We have to play with a different dynamic in the last third of the pitch and take more risks,” added Loew, in his last tournament after 15 years in charge.

The Germans are in third place in the group, with holders Portugal and France on three points. Hungary are in last place after their own opening loss to the Portuguese.

Germany face Hungary in their last group match next week.

“What I feel is a determination, the absolute will. Everyone knows we need to improve things tomorrow.”

Portugal are among the title favourites, with Cristiano Ronaldo netting twice against Hungary to become the all-time highest Euro scorer with 11 goals, but for Loew the team has far more talent than just their captain.

“They are a strong team, very good players, highly skilled. It is not a one-man show. Portugal have more depth, there are many, many other players.

“Obviously Ronaldo can do more than just move Coca-Cola bottles around,” Loew said in reference to his moving bottles out of the way during a news conference days ago.

“In attack I could mention a lot of names, not only Cristiano Ronaldo, who have special skills, who can decide matches.”

England manager Gareth Southgate conceded that his side under-performed in their Euro 2020 Group D clash against Scotland on Friday but was not ...
Sport
1 year ago

Kevin de Bruyne came off the bench to inspire Belgium in a 2-1 comeback win over Denmark on Thursday to clinch their place in the Euro 2020 knockouts ...
Sport
1 year ago