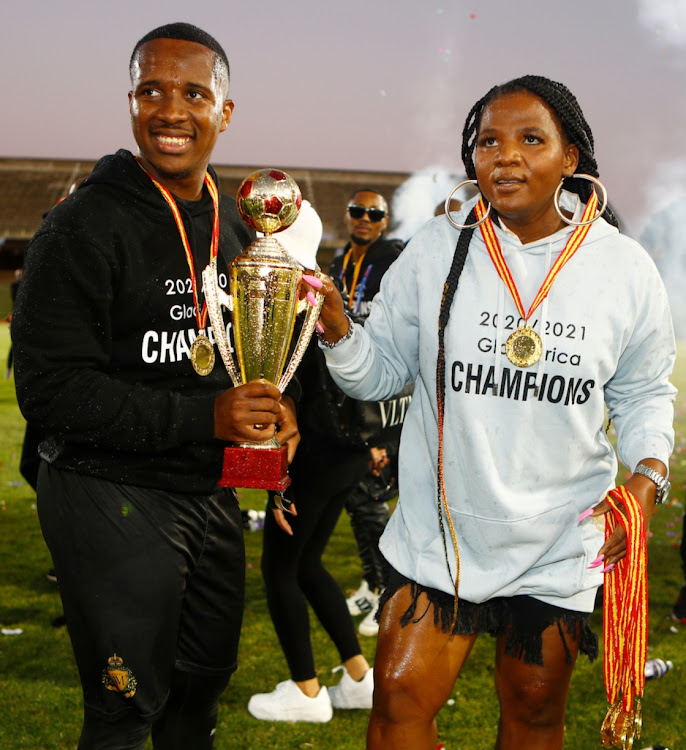 Andile Mpisane and Shauwn Mkhize of Royal AM FC during the GladAfrica Championship 2020/21 game against Cape Town All Stars at Chatsworth Stadium on May 23 2021.
Image: Steve Haag/BackpagePix

Royal AM will play their GladAfrica play-off match against Chippa United at the Chatsworth Stadium in Durban on Tuesday despite vowing in a letter to the Premier Soccer League (PSL) on Monday that they would not honour the fixture.

In the letter to the PSL, Royal AM, through their lawyers Mabuza Attorneys, had revealed their latest position on the play-offs, concluding in one of their three points: “It therefore stands to reason that Royal AM will not be participating in the illegal, unconstitutional and criminally inspired play-offs as an accomplice.

“We further demand the NSL (PSL) must call off the play-offs and mitigate its culpability or show a measure of remorse.”

TimesLIVE, however, learnt through highly placed insiders that behind the scenes the Durban club was preparing to meet Chippa United, who beat Richards Bay FC 2-1 in the first play-off match in Port Elizabeth on Saturday.

“We shall play,” the insider said in a message to TimesLIVE.

The PSL issued a statement on Tuesday morning confirming the match between Royal AM and Chippa was going ahead later in the day.

“The PSL was advised that the order of Nyathi AJ of June 15 2021 suspending the commencement of the play-offs ‘pending the final determination of Royal AM’s application for leave to appeal and/or appeal’ no longer applied. Nyathi AJ today handed down the reasons for his order of June 15 2021 and expressly confirmed he handed down the order he did ‘pending the application before his Lordship Sutherland DJP’. There is no room for debate on the matter.

“The play-offs commenced and the second match of the competition will be played this afternoon (Tuesday) at 3pm at the Chatsworth Stadium between Royal AM and Chippa United.”

It was not immediately clear what has changed the minds of the Durban club, who wanted the play-offs suspended as per the interim order by Gauteng high court acting judge JS Nyathi issued last Monday, but dismissed by deputy judge president Roland Sutherland on Friday.

Immediately after Sutherland’s order on Friday night, Mabuza Attorneys issued a notification letter to the PSL, indicating they are now appealing Sutherland's order via section 17(2)(b) of the Superior Courts Act 10 of 2013.

Royal AM were still of the view that a high court can grant them what they want.

Granting the league some sort of reprieve on Friday, Sutherlands dismissed Royal AM's application, saying: “In my view the application for leave to appeal must be dismissed.”

The GladAfrica Championship promotion-relegation court saga, which has taken the Premier Soccer League (PSL) more than a month to resolve, is far ...
Sport
1 year ago

The Premier Soccer League (PSL) have said that the opening playoff match Chippa United and Richards Bay FC will go ahead on Saturday at Nelson ...
Sport
1 year ago

Chippa United get winning start as endangered playoffs get under way

Chippa United made a positive start to preserving their Premier division status, beating Richards Bay FC 2-0 at Nelson Mandela Bay Stadium in the ...
Sport
1 year ago