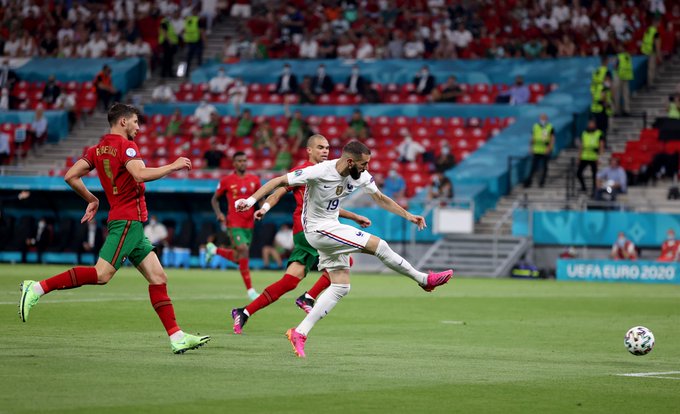 Karim Benzema scored his first goals for France since 2015 as Les Bleus advanced to the Euro 2020 last 16 round top of their group.
Image: UEFA EURO 2020/Twitter

France coach Didier Deschamps described events in Budapest as magical and insane after his side drew 2-2 with Portugal on a night full of twists and turns which ended with Les Bleus heading into the Euro 2020 last 16 as Group F winners.

With qualification for the knockout stages secured before Wednesday's match, France were aiming to top the group and secure a more favourable last-16 tie.

With the scoreline ever-changing in the match between Hungary and Germany in Munich, two goals from Karim Benzema were cancelled out by a pair of Cristiano Ronaldo penalties as France had to settle for a draw.

"We were seeing the scoreline in the night's other match as Hungary were beating Germany, and it was making things very complicated," Deschamps told a news conference.

"It was an insane match that went in all directions. I am really satisfied.

"Football is pure magic, from one situation to another the emotions can change so quickly.

"The morale of the team can change too. Tonight was pleasing even though not everything was perfect. It was a match on the top level."

France will meet Switzerland in the last 16 in Bucharest on June 28.

Benzema levelled in first-half stoppage time after the first of Ronaldo's penalties, before firing France in front just after the break - the striker's first goals for his country since 2015.

After returning to the squad for this tournament, Benzema made a slow start back in the international fold in France’s opening two games, with the reaction from back home what the Real Madrid striker expected.

"I knew that as soon as I returned to the national team the critics would come out," Benzema said.

"That is part of football. But I never gave up. As soon as I enter the pitch I want to score and today I managed that.

"Everybody was waiting for this goal tonight, and that was an extra motivation for me. It is a great pleasure to be scoring again (for France)."

Royal AM’s decision to not take the field against Chippa United in their promotion-relegation playoff match on Tuesday followed another letter sent ...
Sport
11 months ago

Royal AM CEO Sinky Mnisi has confirmed the club will not honour their second promotion-relegation playoff match against provincial rivals Richards ...
Sport
11 months ago

Sivutsa Stars from Mpumalanga will make the push for a return to the professional ranks of South African football when the ABC Motsepe League ...
Sport
11 months ago

After playing a starring role in Kaizer Chiefs’ epic 1-0 away win against Wydad Casablanca in the Caf Champions League semifinals‚ Bruce Bvuma broke ...
Sport
11 months ago

An inspired Luka Modric curled home a magnificent finish as Croatia shrugged off a slow start to Euro 2020 to beat Scotland 3-1 on Tuesday and reach ...
Sport
11 months ago

England delivered an efficient but hardly scintillating display to beat Czech Republic 1-0 with an early Raheem Sterling header on Tuesday to advance ...
Sport
11 months ago