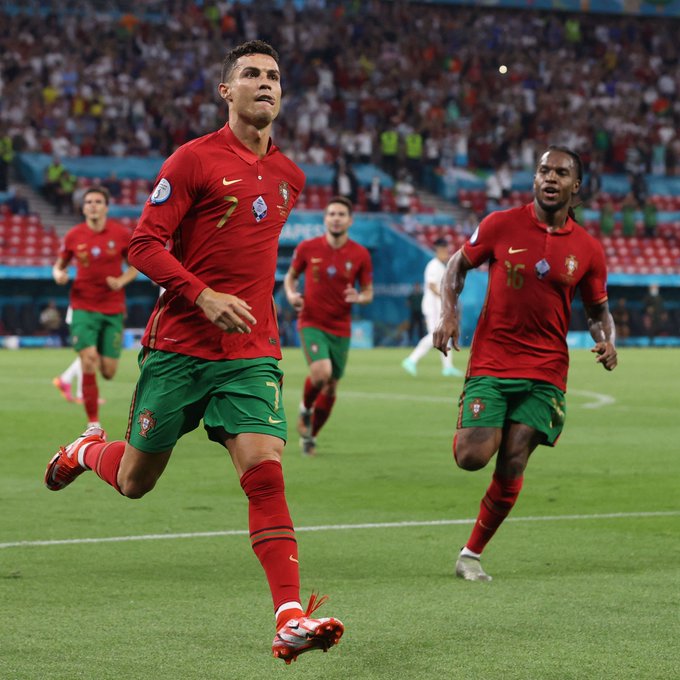 Portugal coach Fernando Santos has described the dilemma he faced during his side's 2-2 draw Euro 2020 Group F with France on Wednesday but insisted his players went out looking for the win even though they risked being knocked out.

The holders were facing a shock exit when Karim Benzema put France 2-1 up as outsiders Hungary were beating Germany.

Even when Cristiano Ronaldo equalised with his second penalty, Portugal were one goal away from going out until Leon Goretzka's leveller in Munich, which meant the other game also ended 2-2.

Portugal came third in the group to set up a tough last-16 tie with Belgium, who won all their group games, in Seville on Sunday.

"I couldn't be sure of anything," Santos told reporters after a rollercoaster final evening in Group F.

"I could have tried to make us go for a third goal but if we'd lost, Germany would gone through ahead of us.

"What mattered was trying to win while maintaining our quality and shape."

Santos said he tried to not focus on events in Munich and had warned his players not to either.

"I even warned the players to not think about the other results as it wouldn't bring us anything positive.

"But the players lived so intensely that when I screamed to go forward my voice no longer reached them," he said.

"The team always wanted to win, but we also knew we couldn't lose. Portugal did everything to win."

Portugal have only three days to rest ahead of the game with Belgium, who last played on Monday, but Santos tried to play down the significance of the fact his side will have less time to prepare.

"We improved a lot compared to the other game.

"Now we have to improve some more before we play Belgium. Any opponent will have difficulties against us because we are always able to score," he added.

"We have 48 hours less than them to get ready, but it doesn't matter.

"We won't be at a disadvantage. Rest is very important and we'll have to make sure our players recover well so they are fresh.

"But we cannot view this as a handicap.

"We'll analyse the Belgium team and prepare the game with the same goal as always, to progress."

Royal AM’s decision to not take the field against Chippa United in their promotion-relegation playoff match on Tuesday followed another letter sent ...
Sport
11 months ago

Royal AM CEO Sinky Mnisi has confirmed the club will not honour their second promotion-relegation playoff match against provincial rivals Richards ...
Sport
11 months ago

Sivutsa Stars from Mpumalanga will make the push for a return to the professional ranks of South African football when the ABC Motsepe League ...
Sport
11 months ago

After playing a starring role in Kaizer Chiefs’ epic 1-0 away win against Wydad Casablanca in the Caf Champions League semifinals‚ Bruce Bvuma broke ...
Sport
11 months ago