Zwane after Chiefs beat Wydad: ‘They will regret the day they decided to send their B team’ 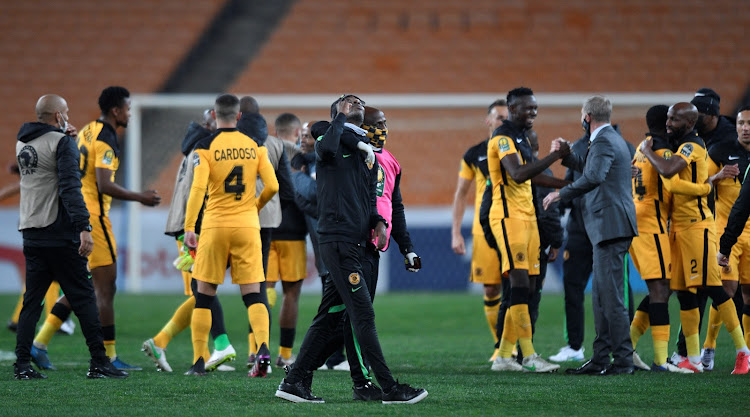 Kaizer Chiefs caretaker-coach Arthur Zwane said that Wydad Athletic will “regret the day they brought their B team” to Johannesburg in the group stages‚ after bowing out sensationally to Amakhosi in the Caf Champions League semifinals.

Chiefs again defended like their lives depended on it‚ the rank underdogs gritting out a 0-0 second leg draw at FNB Stadium on Saturday night that saw the tie decided 1-0 on aggregate by Samir Nurković’s strike in Casablanca‚ sending shock waves around Africa.

Wydad have been one of the best-performing teams on the continent in the last half-decade.

Chiefs had never reached the group stages. It was the mother of all mismatches.

But Amakhosi pugnaciously and unashamedly threw their existence into defence mode so effectively as to have made history.

They will contest the July 17 final against Pitso Mosimane’s Al Ahly at Wydad’s home ground‚ Stade Mohamed V in Casablanca.

In Group A Wydad hammered Chiefs 4-0 in neutral Burkina Faso.

Wydad brought a B side to Johannesburg for the return leg‚ minus coach Faouzi Benzarti‚ who was receiving his Covid-19 vaccine‚ and lost 1-0 against a nine-man Chiefs.

Without that result Chiefs would not have been in the semis to then take Wydad’s scalp.

That win also played a role in Chiefs‚ a fresh wind of unpredictability blowing through Naturena after the dismissal of coach Gavin Hunt‚ having the confidence to believe they just might shock Wydad in a grim war of attrition.

“Look‚ we knew their strengths from day one. I think they will regret the day they decided to send their B team‚” Zwane said after the second leg.

“I think it’s more like a learning experience‚ that when they [Wydad] are on a roll‚ they don’t take anyone for granted.

“We were obviously going to be underdogs. We’re not good enough to compete against them.

“And they paid the price. Because I think if they sent their best team that time maybe things would have been different.

“But unfortunately for them‚ because they took us for granted that time‚ we gave them something to think about and we surprised them.”

Zwane said being underdogs‚ unabashedly defending over both legs‚ worked for Chiefs.

What they lacked in finesse they made up for in pure fight‚ earning praise from Wydad’s seasoned Tunisian coach Benzarti for their “unbelievable defence”.

Zwane said Chiefs knew they did not have the player quality or confidence and pedigree of Wydad. He said Chiefs also knew they could not go toe-to-toe with the Moroccans.

“Wydad are a very good team‚ there’s no doubt about it. A solid team‚ they are good in defence‚ and also very good going forward‚” he said.

“But they also have their weaknesses like any other team.

“Whatever formation that they were going to put out‚ we were still going to capitalise because we were always going to be underdogs.

“So‚ it worked for us the way we planned. We knew that if you go pound for pound with them‚ you open up‚ give them enough space to manoeuvre‚ they can punish you.

“They did have quite a few chances again tonight. And [goalkeeper] Daniel Akpeyi came to the party and did very well for us.

“And the whole defence. But again we had two or three chances that I believe we could have done better.

“It’s been our dream‚ since I was a player and before I was a coach‚ that we wanted to win this for the chairman [Kaizer Motaung].

“And hopefully the man above will give us the strength even for the final‚ to make sure we win it for him.”

Chippa United have, mathematically and at least for now, retained their status in the DStv Premiership after drawing 1-1 against Richards Bay in the ...
Sport
5 months ago

A win against Richards Bay at the Umhlathuze Sports Stadium (3pm) in the Premier Soccer League (PSL) promotional- relegation playoffs on Saturday ...
Sport
5 months ago

London — Italy stormed into the last 16 scoring more freely than in past European Championships, but it is their near-impenetrable backline that ...
Sport
5 months ago

As they had promised‚ Royal AM did not turn up to honour their Premier Soccer League (PSL) promotion-relegation playoffs match against Richards Bay ...
Sport
5 months ago

Whether by design or default, extravagant entrepreneur Shauwn Mpisane has turned the Premier Soccer League into an extension of her television ...
Sport
5 months ago

What you said: Fans predict Kaizer Chiefs could go all the way in the Caf Champions League

It's crunch time for Amakhosi when they face Moroccan giants Wydad Casablanca on Saturday after securing a 1-0 victory in the first-leg match played ...
Sport
5 months ago