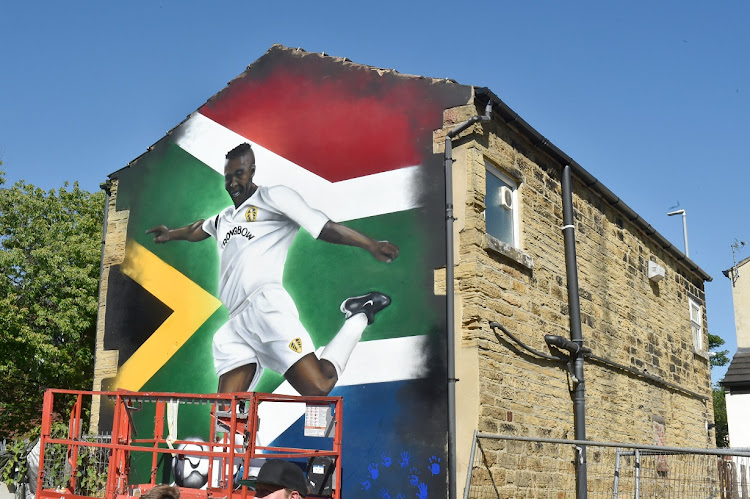 A new mural of Leeds United legend Lucas Radebe on the wall of Sweeney Todd Barbers in Chapel Allerton, Leeds by artist Adam Duffield is near completion.
Image: Steve Riding/Twitter

Leeds United legend and ex SA captain Lucas Radebe has been immortalised in a stunning new mural in the Yorkshire city.

The Kaizer Chiefs and Bafana Bafana great, who captained SA at the 2002 World Cup, played for Leeds from 1994 to 2005, making 256 appearances in one of their most successful periods in the English Premier League. The beloved centreback earned the nickname “The Chief” from the club’s supporters.

The Yorkshire Evening Post reported that the mural was unveiled by the Leeds United Supporters’ Trust, and has been funded by Fans For Diversity, a joint project by the Football Supporters’ Association and Kick It Out antiracism campaign.

The paper said the “35-foot mural has been painted on the side of Sweeney Todd Barbers in Chapel Allerton by artist Adam Duffield — aka Meds One — where Radebe used to be a regular before striking up a close friendship with owner Richard Dwyer”.

Absolutely over the moon about the mural that’s currently underway @WeAreTheFSA highlighting my contribution @LUFC Its an honor #fansfordiversity #MOT 💙💛🤍🙏🏾 https://t.co/WNlVKkZR2D

The mural depicts Radebe imposed over a SA flag with the quote “This is My Hero”, the phrase the late former president Nelson Mandela once used to describe him.

Radebe told the evening Post: “I am very proud and honoured to be chosen as the subject for the latest mural from the Leeds United Supporters’ Trust. I have been a passionate antiracism campaigner during my playing career at Leeds and since I have retired.

Our city is looking awesome with murals created by some of our amazing talented Leeds based artists! Please continue to donate to the fans mural fund so we can continue to bring more of these to life - https://t.co/PepGuTvXV5 pic.twitter.com/OqKf6eDXHR

“I am delighted that this mural will stand as a symbol for the message of inclusivity and diversity in my second home of Leeds.

“I can’t wait to come and see it in person. I really appreciate the support and love you guys show to me.”

Second great day this week-little chat with The Chief himself @LucasRadebe in South Africa and @curlywand Simon Rix of The Kaiser Chiefs in Leeds at the @lufctrust mural #lufc #LUFC . Go see it in Potternewton Lane at Sweeney Todds (Lucas got his haircut there).#ALAW #alaw pic.twitter.com/IUaTloGBLs

Radebe also tweeted: “Absolutely over the moon about the mural that’s currently under way highlighting my contribution.”

The mural is one of a series painted around the city under the auspices of the LUFC Supporters’ Trust, using Leeds-based artists Duffield, Nicolas Dixon and Andy McVeigh.

The @LucasRadebe mural won’t be complete until next week, but this afternoon we invited a number of Lucas’ down who are named after “The Chief” to embed their hand prints on the mural - they also got a surprise face time from the man himself #chiefchiefchief pic.twitter.com/DzOSvzq6KX

Radebe once had a beer — the Radebeer — named after him in Leeds, and the rock band Kaiser Chiefs based their name on the SA club of their football hero.

Leeds were promoted back to the Premier League in July 2020 after a 16-year hiatus in the lower league wilderness.

Brighton and Hove Albion attacker Percy Tau has advised SA players to move overseas at a young age and acquaint themselves with the challenges of the ...
Sport
8 months ago

In Leeds, footballer Lucas Radebe is so popular that even now, 14 years after he left the UK club, fans are still naming their children after him.
Sport
2 years ago