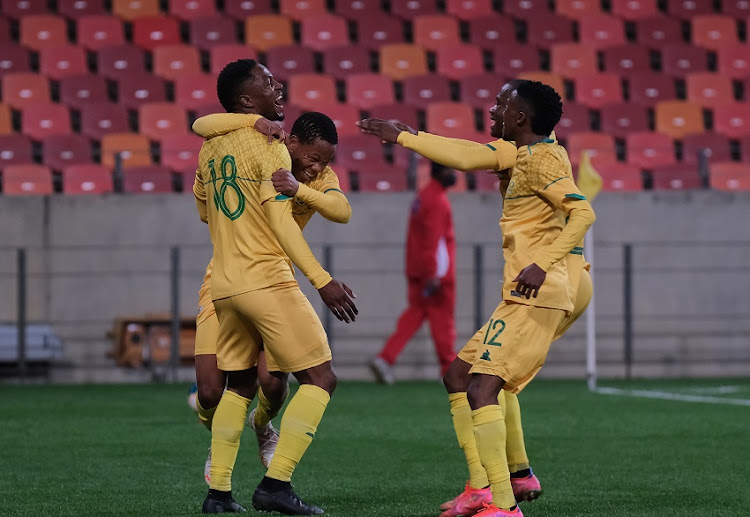 SA celebrate after scoring a goal during the Cosafa Cup match against Botswana at Nelson Mandela Stadium on July 6 2021.
Image: Michael Sheehan/Gallo Images

SA got off to a winning start in Group A of the Cosafa Cup at Nelson Mandela Bay Stadium on Tuesday, substitute Kagiso Malinga’s 67th-minute strike separating the teams in a closely fought contest.

This might have been Bafana Bafana in name, but in nature the squad was a strictly developmental combination taken to Gqeberha as the national team struggled to put together even a strong fringe combination in the South African off season.

Captain and goalkeeper Veli Mothwa, Rushine de Reuck in defence, Ethan Brooks and Siyathemba Sithebe in midfield and Sphelele Mkhulise in attack were players in the starting XI who might justifiably put their hands up for senior team selection in the near future.

The South African camp had also been hit by Covid-19 cases and precautionary isolations.

On Monday Helman Mkhahlele — head coach in this competition in the absence of new Bafana coach Hugo Broos — and goalkeeper coach Lucky Shiburi tested positive in rapid tests for Covid-19. There was no update from the Bafana camp by kickoff on whether the pair’s polymerase chain reaction (PCR) tests had confirmed they had the virus.

Blast from the past: Lorch carries the torch as Bafana KO Egypt

Shiburi and Mkhalele had added to two players and another technical staff member, who had not been named, who had been isolated on the weekend — two for testing positive and one for being in close contact.

SA rode their luck in an unconvincing opening hour, Botswana even rocking the woodwork.

The introduction of Swallows FC striker Malinga, who grabbed an opportunistic goal against the run of play, earned a strike that took the wind out of the sails of Botswana, as the South Africans closed out the final quarter relatively convincingly.

SA could not get a grip on proceedings in the opening half.

They started the game applying pressure, creating situations that did not materialise in a save having to be made by Botswana goalkeeper Ezekiel Morake. But it was Botswana who increasingly improved their forward momentum.

Mamelodi Sundowns’ Mkhulise at playmaker and the now ex-Free State Stars right wing Monnapule Saleng — the Orlando Pirates signing who scored 13 goals in the GladAfrica Championship in 2020-21 — were lively for SA in the opening exchanges.

Slowly it was the Zebras who came increasingly into the game. In the 35th they might have scored. Boy’s corner was headed powerfully goalwards by big centreback Mosha Gaolaolwe, TS Galaxy winger Masilake Phohlongo heading off the line. Lively winger Thero Setsile struck the rebound inches over the bar.

Bafana, needing purpose and cohesion in attack, brought on Malinga for Galaxy’s Thabang Sibanyoni upfront early in the second half.

But it was Botswana continuing to find fluency. In the 65th Boy’s speculative cross caught Baroka FC right-back Mashweu Mphahlele off balance, whose header looped back across the Bafana area where Thatayaone Kgamanyane smashed a volley on to the crossbar.

SA’s goal came against the run of play. De Reuck punted a free-kick from deep into the Zebras’ area, where Malinga latched on to it and struck a low volley from near the goal line that caught Morake napping, the Botswana keeper unable to get down to the save.