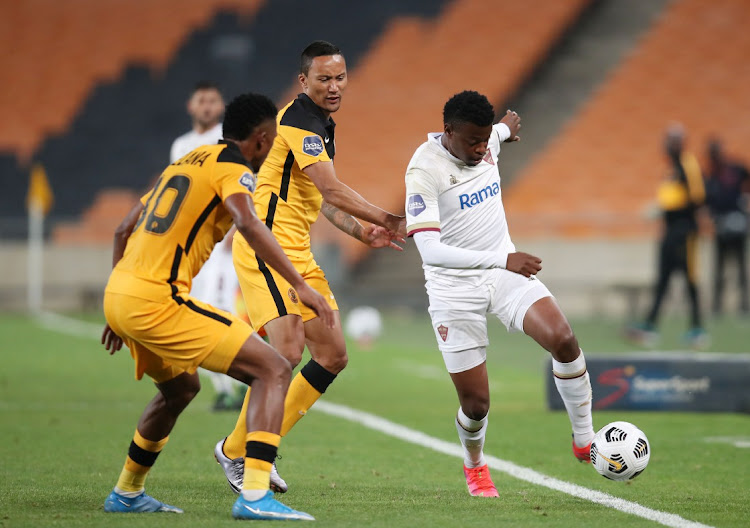 Kaizer Chiefs have continued showing they mean business restoring the club to a competitive level that can match their stature‚ confirming the signing of six new players‚ and one recalled from loan‚ on Friday.

Having suffered a two-window Fifa-imposed transfer ban that largely derailed their 2020-21 season‚ Chiefs announced the six signings in a somewhat triumphant manner.

There are some strong additions in the mix. Three players are signed from Swallows — who finished sixth in their maiden season promoted back to the DStv Premiership‚ losing just one match.

Bafana Bafana left-back Hlanti, 31, has experience‚ won a league title at Bidvest Wits in 2016-17‚ and featured for the national team at the 2019 Africa Cup of Nations.

Ngcobo, 27, won the Premiership Defender of the Season for his performances at centreback for the Birds. Winger Sekgota, 24, has been an exciting attacking presence at Swallows.

Nange had a strong season in central midfield for Stellenbosch FC. Mabiliso drew the eye at AmaZulu in their charge to second place in the league.

A statement from Chiefs read: “The first day of July 2021 marked the end of the ban that prevented Kaizer Chiefs from signing new players for two consecutive window periods. With Amakhosi having last signed players from other teams back in January 2019‚ the technical department has wasted no time in recruiting at least seven new players to don the famous gold and black colours in the upcoming season.

“Chiefs’ recruitment process for the 2021-22 season has already yielded Brandon Peterson‚ Sifiso Hlanti‚ Phathutshedzo Nange‚ Njabulo Ngcobo‚ Sibusiso Mabiliso and Kgaogelo Sekgota. In addition‚ Chiefs have decided to retain one of the club’s brightest academy graduates‚ midfielder Given Thibedi‚ who is back following a loan spell with Swallows.”

After going six seasons without a trophy‚ Chiefs have shown their intention to restore the club to a competitive frame bringing back Stuart Baxter‚ who won league and cup doubles in 2012-13 and 2014-15‚ as head coach.

Another former Bafana coach‚ and Baxter’s assistant with the national team‚ has been roped in as head of technical and the academy.

Kaizer Motaung Junior has been appointed to a new position of sporting director.

Chiefs can avoid their sixth season trophyless if they beat Al Ahly in the Caf Champions League final in Casablanca‚ Morocco‚ on July 17.

Stuart Baxter this week quietly assumed his fifth coaching job in SA, rejoining Kaizer Chiefs after being six years away.
Sport
1 year ago

If there is a player in the Kaizer Chiefs squad one can rely on fighting talk to match fighting performances‚ it is Willard Katsande.
Sport
1 year ago

Kaizer Chiefs will have a full squad available for the Caf Champions League final against Al Ahly on July 17‚ including the players whose contracts ...
Sport
1 year ago