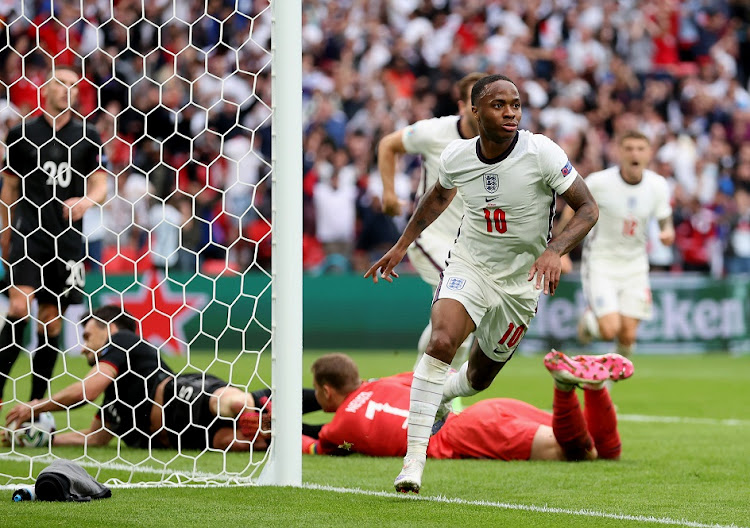 Raheem Sterling of England celebrates after scoring their first goal in the Uefa Euro 2020 Championship round of 16 match against Germany at Wembley Stadium on June 29 2021.
Image: Catherine Ivill/Getty Images

Major tournaments have not always brought happy memories for Raheem Sterling but he has risen to the occasion at Euro 2020 and become England's most effective player in their run to Sunday's final against Italy.

Of the 10 goals Gareth Southgate's side have scored at the tournament, Sterling has had his prints on seven of them, providing the cutting-edge to England's carefully crafted machine and frequently finding the breakthrough goal.

His goal in the opening game against Croatia showcased his ability to prise rigid teams open, darting across the pitch undetected to insert himself between defenders and beat the keeper with one touch.

Coming at Wembley Stadium which he had grown up next to, it was a hugely significant goal for Sterling, who had come off the back of a disappointing season on an individual level with Manchester City despite winning the Premier League title.

He faded from the team in March and posted his lowest goal count in the league in four seasons. He did not start any of City's Champions League quarter-final or semi-final matches and when he did win back his place for the final, he had a night to forget in the 1-0 defeat by Chelsea.

"He has looked very hungry from the first whistle, motivated by his desire to further prove himself as a player for the big occasion," former England women's player Karen Carney wrote in The Guardian.

"When someone doubts you, it drives you to better yourself because footballers need to challenge themselves constantly to get the best out of themselves. Everyone knows how good Sterling can be and it is fantastic to see him flourishing."

Sterling also had a point to prove after failing to score in his 12 previous appearances in major tournaments and being partly blamed by the media for England's poor showing at Euro 2016.

Coach Southgate referred to Sterling's barren run at tournaments as a "hex" and a curse did seem to be lifted as he struck the only goal against the Czech Republic and got the all-important opener in the last-16 win against Germany.

He did not score in the 4-0 romp of Ukraine in the quarter-finals but set the tone by laying on Harry Kane's early goal with an incisive through ball after dancing past two defenders as he cut inside from the left wing.

He toyed with Ukraine's defence again for the third goal before backheeling the ball for Luke Shaw to cross and find Kane.

In the cagey and tense semi-final with Denmark, Sterling provided the spark England needed, darting across to reach Bukayo Saka's pass which forced Simon Kjaer to put the ball into his own net for the equaliser.

And when England desperately sought a way through as they dominated extra-time, it was Sterling who weaved his way into the area from the right wing to earn the penalty from which Kane, with the help of a rebound, hit the winner.

"In each game Sterling's sharpness, speed and skill have brought a spark to the team," added Carney.

"The upside to his not being an automatic selection at City is that he seems fresher than many players, which is not what an opposition defender wants."

Sterling's storming performances have not surprised former England defender Rio Ferdinand, who revealed that on the morning of the opening game with Croatia that Sterling was feeling extra motivated and had told him on the phone: "It's time."

"I believe he was the difference."