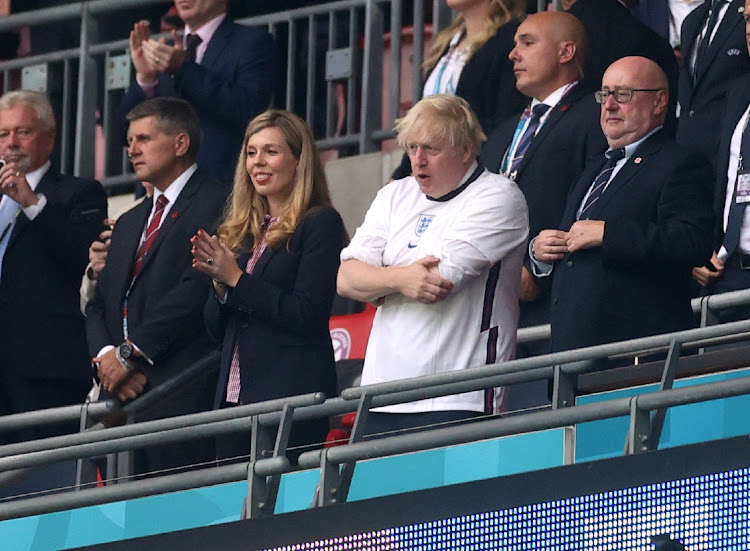 Britain's Prime Minister Boris Johnson with his wife Carrie Johnson in the stands before the final.
Image: REUTERS/Carl Recine

British Prime Minister Boris Johnson on Monday condemned the racist abuse on social media aimed at England soccer players after their narrow defeat in the final of Euro 2020, drawing accusations of hypocrisy from political opponents.

Black players Marcus Rashford, Jadon Sancho and Bukayo Saka were subjected to "disgusting" online abuse after they missed spot-kicks in a penalty shootout with Italy which settled Sunday's final which had finished as a 1-1 draw.

It prompted a police investigation and wide condemnation including from ministers and royalty, with Queen Elizabeth's grandson Prince William, who is president of the Football Association, saying he was "sickened".

"It is totally unacceptable that players have to endure this abhorrent behaviour," he said on Twitter. "It must stop now and all those involved should be held accountable."

The England team has been highlighting the issue of racism throughout the tournament, taking the knee before all their matches. However, some fans have booed the gesture, with critics viewing it as an unwanted politicization of sport and expression of sympathy with far-left politics.

Some ministers have been accused of hypocrisy for refusing to criticise those who booed at the start of the tournament, but now condemned the racist abuse.

"This England team deserve to be lauded as heroes, not racially abused on social media," Johnson said on Twitter. "Those responsible for this appalling abuse should be ashamed of themselves."

Home Secretary (interior minister) Priti Patel, who last month said she did not support players taking the knee because it was "gesture politics" and that it was a choice for the fans whether to boo players, was among those who denounced the abuse.

Johnson's own spokesman had also declined to criticise the fans over the issue when asked but said the prime minister wanted supporters to get behind the team.

"The Prime Minister and the Home Secretary gave license to the racists who booed the England players and are now racially abusing England players," she said on Twitter.

"Boris Johnson and Priti Patel are like arsonists complaining about a fire they poured petrol on. Total hypocrites."

While the social media feeds of the players also showed huge levels of support and gratitude from fans for the tournament, the abuse overshadowed the positive messages.

"We're disgusted that some of our squad - who have given everything for the shirt this summer - have been subjected to discriminatory abuse online after tonight's game," the England team tweeted.

The English Football Association said fans who exhibited such "disgusting behaviour" were not welcome and urged the authorities to hand out "the toughest punishments possible".

London Police said officers were aware of the offensive and racist comments, and would take action.

"It will not be tolerated and it will be investigated," the force said on Twitter.

The issue of online abuse of players led to British soccer authorities briefly boycotting social media platforms to highlight the issue, a stand joined by other sporting bodies. Tech firms have been repeatedly accused of failing to do enough to deal with the problem.

In May, the British government announced plans for a new law that could see social media companies fined up to 10% of turnover or 18 million pounds ($25 million) if they failed to stamp out online abuses such as racist hate crimes.

Labour said the proposals would not stop the abuse directed at the three players.

"Twitter, Facebook and Instagram have the means to stop this hatred on their platforms and yet they decide to do nothing," Jo Stevens, Labour's media and sport spokesperson, said.

The SA under-23 Olympic soccer team has suffered a huge blow with the withdrawal of five players due to various medical reasons.
Sport
4 months ago

Kaizer Chiefs have played in numerous cup finals in the 51 years of their existence but the Naturena side's Caf Champions League final date with ...
Sport
4 months ago

Italy won the European Championship for the first time since 1968 as Gianluigi Donnarumma saved two England penalties en route to a 3-2 shootout win ...
Sport
4 months ago

Cape Town City have announced the signing of midfielder Katlego Mokhuoane on a four-year deal.
Sport
4 months ago

England's Football Association released a statement in the early hours of Monday morning condemning the online racist abuse of players following the ...
Sport
4 months ago

Kaizer Chiefs have defied the odds to reach the final of the Caf Champions League and Columbian lethal striker Leonardo Castro has urged his ...
Sport
4 months ago